The latest work from the world’s most famous anonymous artist manages more than just a tribute to Oscar Wilde. Banksy’s newest painting imagines the late author escaping the very same prison he was unjustly held in. On its own, the mural is moving and poignant. But Banksy has now used another medium to turn it into something even more. He released a behind-the-scenes video of the creating the mural, set to audio from Bob Ross‘s lessons on The Joy of Painting. The mashup combines three great artists to make one powerful comment about art itself.

In his video “Create Escape” (which we came across at Laughing Squid), Banksy shows how he covertly made his latest viral piece, “The Great Escape.” It’s a spray-painted, stenciled mural of Oscar Wilde climbing down the brick wall of the former HM Reading Prison located in Reading, Berkshire, England. It held the author from 1895 to 1897. He was found “guilty” of “gross indecency” (the legal term for imprisoning someone for being gay).

In the painting, Wilde wears a classic prisoner uniform. He scurries down a rope ladder—which connects to a typewriter at the bottom—outside the brick wall. Unto itself the piece has an obvious resonance. But Banksy added another layer to the work by including Bob Ross’ narration over the video.

The Joy of Painting host’s dulcet instructions on how to paint stand in contrast to Banksy’s middle-of-the-night exploits with spray cans. And yet, everything Ross says applies to Banksy’s craft. The location and tools may be different, but the expression of the artist remains the same. 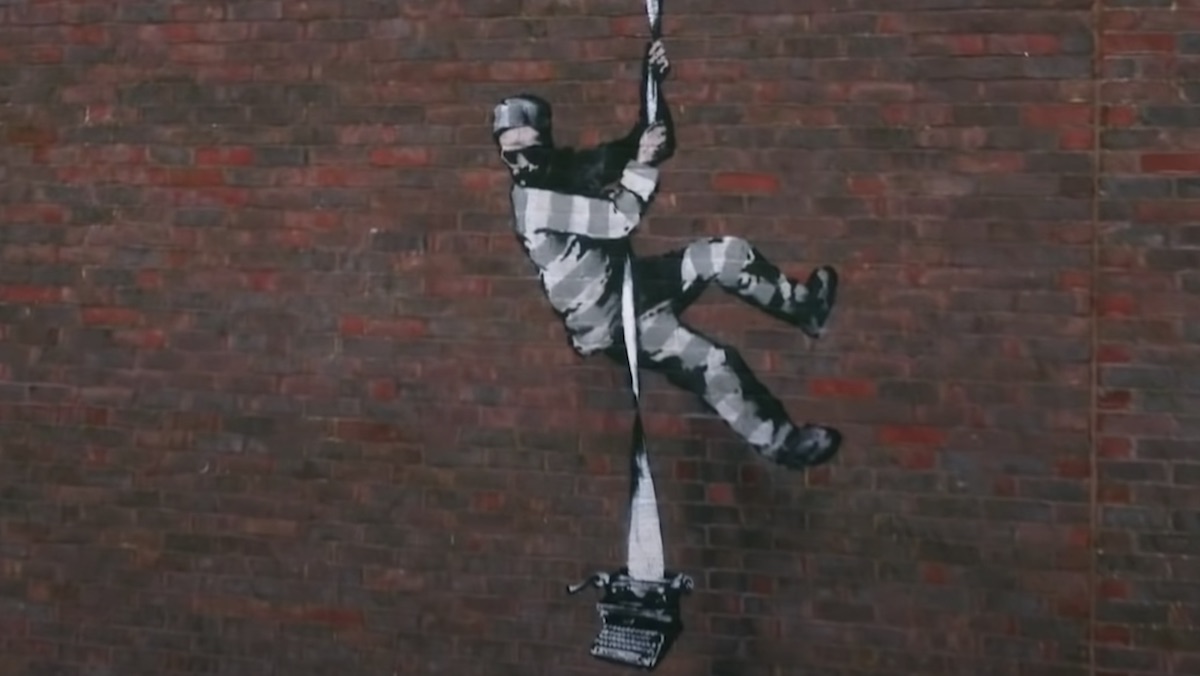 But it’s not Bob Ross’s guidance that stands out. It’s what he says at the end. “Painting to me represents freedom. I can create the kind of world that I want to see and I want to be part of.”

Whether through the written word, or paints applied with a brush or a spray can, this video captures the power of art itself. And any art that celebrates Oscar Wilde and Bob Ross is the kind of world we want to be a part of.