This year, the Geek & Sundry editorial contributors have come together and collaborated to put together several curated lists of games. Whether you’re looking to pick one up for yourself or as a gift, these titles are some of the best the tabletop industry has to offer and we heartily recommend them.

With the holidays quickly racing towards us like an avalanche, it’s time to start building your wish lists. You or someone you know have been really good this year right? Well then, grab a hammer and smash your piggy bank as we’ve found some amazing games that might be a bit pricey, but are sure to impress and delight whomsoever you gift them to. 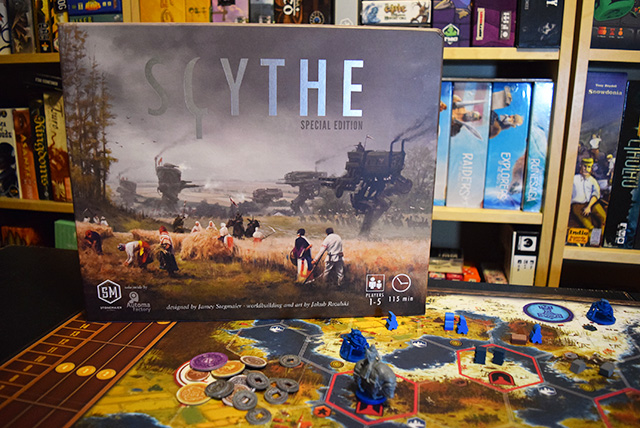 The Great War is over. Europa has fallen and the disgraced leaders are looking to restore their honor by leading their people to take back what they once lost. Stonemaier Games’ 1920’s alternate-history game, Scythe, is not quite what it seems at first. What looks like a complex war game fought with giant mechs, is actually a streamlined area-control game that lets you choose your own paths to victory.

The base game allows for 1-5 Players, but by adding the Invaders from Afar expansion brings the player count up to 7. Invaders also adds 2 new factions with their own powers and strategies. Scythe has one other expansion so far called The Wind Gambit, which introduces 2 new mechanics airships and resolutions. Resolutions are cards that will change the rules of the game each time you play and Airships give players more mobility.

The entire bundle of the base game plus expansions comes to $135 and makes a great gift for anyone looking for a really slick area-control game. 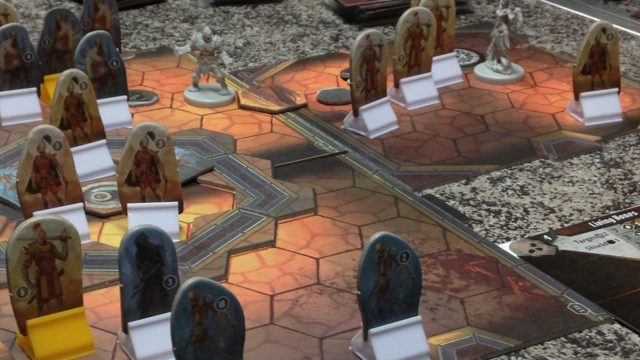 Gloomhaven is a whopper of a legacy-style, dungeon-crawler game. Designer Isaac Childres has created a unique dark fantasy world where players need to cooperate to survive. In our review of the game, G&S contributor Charlie Theel notes: “The world of Gloomhaven is not your typical fantasy fare. Here, we have wild frontier countryside on the edge of the world inhabited by a range of oddities. You can play a rock humanoid world-beater similar to the Thing from Fantastic Four, or even a mage who has crystals jutting out of her skin and can manipulate the environment at her whim. You will run across goat-men, golems, and little squirrel-rat hybrids that deserve to be stomped out despite inherent cuteness. You will delve into strange caverns with otherworldly effects and nasty surprises. That sense of wonder is front and center as you cling to little bits of lore and try to decipher pieces of the whole.”

The game is played over several adventures; unlocking new dungeons and story paths as you make decisions that will affect your game similar to a “Choose Your Own Adventure” story. Similar to a roleplaying game like Dungeons and Dragons, you’ll be helping craft a communal story with characters which will advance as they gain experience and new equipment.

If you have a roleplayer looking to expand their horizons with board games, consider giving them the gift of Gloomhaven. 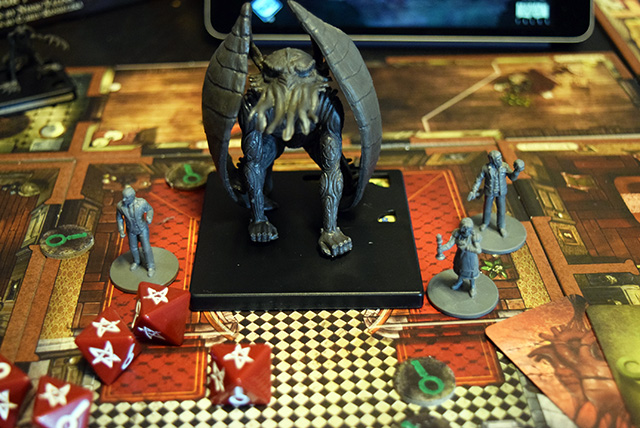 Have a horror fan who deserves a fun treat? Fantasy Flight’s Mansions of Madness 2nd Edition is a challenging co-op that’s sure to have you on the edge of your seat. Players are tasked with investigating mysteries set in the Cthulhu Mythos. As they explore the creepy mansion tiles will be revealed by the accompanying app, which makes for a more immersive experience as you can’t anticipate what will be around the next corner. This version is a huge improvement over the original Mansions of Madness as the app also replaces the game master role (which originally controlled all of the evils in the house) allowing every player to be part of the group.

Mansions of Madness Second Edition is one of our 2016 Best Board Games of the Year picks. According to G&S contributor Rob Wieland: “Mansions of Madness Second Edition is an excellent addition to the line because it skillfully walks the line between board game and RPG.” Grab the base game along with its expansions to make for a perfect bundle gift for your dearest investigator. Looking for a gargantuan game packed full of minis? Why not pick up what we deemed “The Best Boxed Set Games Workshop Has Ever Produced”.  Dark Imperium is set in the Warhammer 40k universe where mankind fights against hordes of hostile aliens.

This boxed set comes with everything you need to play Warhammer 40k including 53 detailed Citadel miniatures, the unabridged hardback Warhammer 40k book, two supplemental books of rules and story, dice, a ruler, and plastic bases for all of the minis. Charlie Theel highly recommends the game saying: “The new 40k is all about flow and velocity as blows are exchanged and bodies collect. It plays with renewed speed and feels fresh and delightful amid a sea of competition. Fun is of primary importance and fun it is.”

Dark Imperium is perfect for the gamer who is looking to dive into minature-based wargaming. 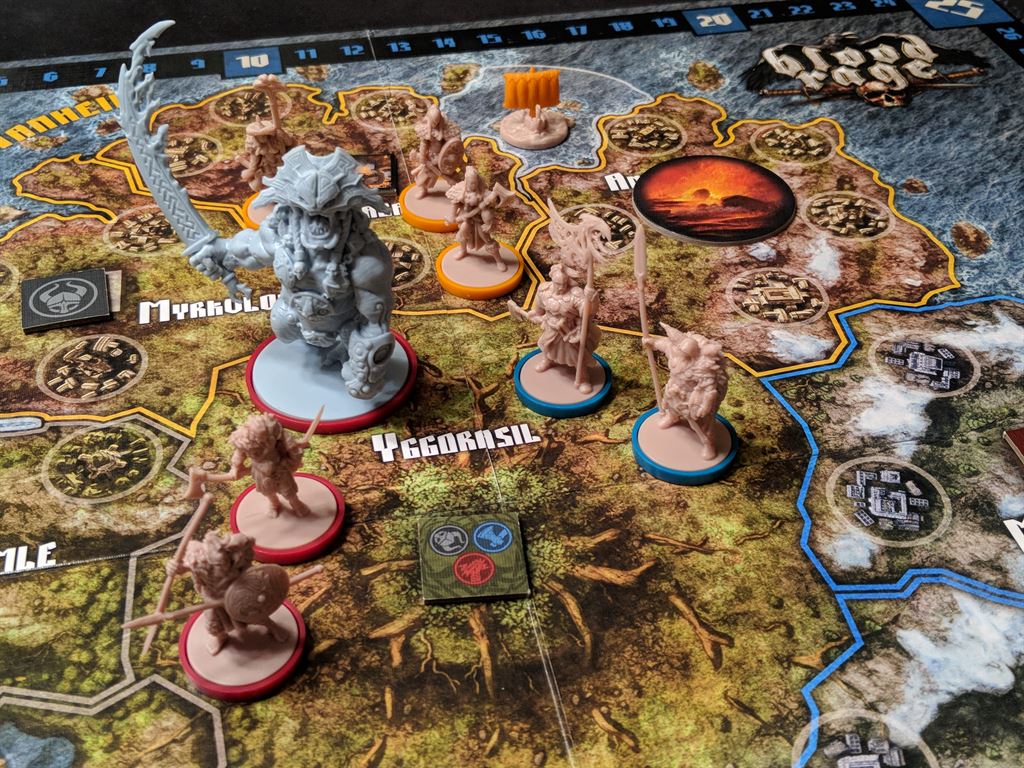 In CMON’s 4 player card-drafting/area control/worker placement hybrid game, Blood Rage, Ragnarok has arrived and Vikingviking clan is out to earn as much glory as they can in order to earn their place in Valhalla. There are many ways to secure a victory including pillaging, battling, fulfilling quests, building up your clan, and even dying in a glorious way.

We’ve previously voted Blood Rage as one of the best board games of 2015 and in our feature we put it this way: “What makes Blood Rage special is how you can adapt your clan to deal with the different situations that arise. You adjust as the game progresses and it’s this ever-shifting strategy that is so engaging. Drafting your gifts at the beginning of each age gives you a chance to rework your strategy and build on what you already have, or see what everyone else is taking.”

Blood Rage comes with a ton of beautifully sculpted minis and has a bunch of expansions that add more minis, new rules, and even room for a fifth player. If you love bombastic viking adventures that will make you want to quaff spirits and cheer your victories, then grab the whole set for $149.96.

These are just a few of the amazing games with a high price tag out on the market right now. What big ticket games are going on your Christmas list? Let us know in the comments below!

Stay tuned in for more curated lists, including the best games of 2017 and the most hotly anticipated games of 2018. If you want to stay on top of the best and newest of tabletop gaming, be sure to also tune in our weekly show Game the Game hosted by Becca Scott on Twitch and Alpha.

WANT MORE TO LEARN MORE ABOUT THE GAMES LISTED?

Editor’s note: some games were provided to Geek & Sundry by the publisher.

In addition to Geek & Sundry, Jessica Fisher writes for Gameosity.com and produces the Gameosity Reviews Youtube Channel. Find her talking about all things geeky on Twitter @miniktty.