Bullets ping off your truck as numerous as the bugs that splatter the windshield. Inside the cabin you wipe sweat off your brow. It’s hot in the waste but this heat isn’t from the sun – it’s from the Raider-made nuclear bomb you’re towing in your cargo area. Those bullets belong to the Railmen Raiders; you’ve just stolen that bomb from their enclave and they want it back. This is the world of Wasteland Express Delivery Service, a high-octane game that’s a little Mad Max, a little Borderlands, and a whole lot of fun.

The world of Wasteland Express Delivery Services (WEDS) jumps out at you before you even open the box. The cover explodes with the promise of a lived-in world full of the kind of characters that made Fury Road so compelling, and the game mostly delivers on that promise. Once you do get inside you’ll find an array of custom trays and enough cardboard to choke a warboy. There are 16 different terrain octagons and 21 Outposts that cleverly fit in to the spaces between those octagons. It’s a lot, but one of the great things about WEDS is that the gameplay is streamlined and easy to slip into. 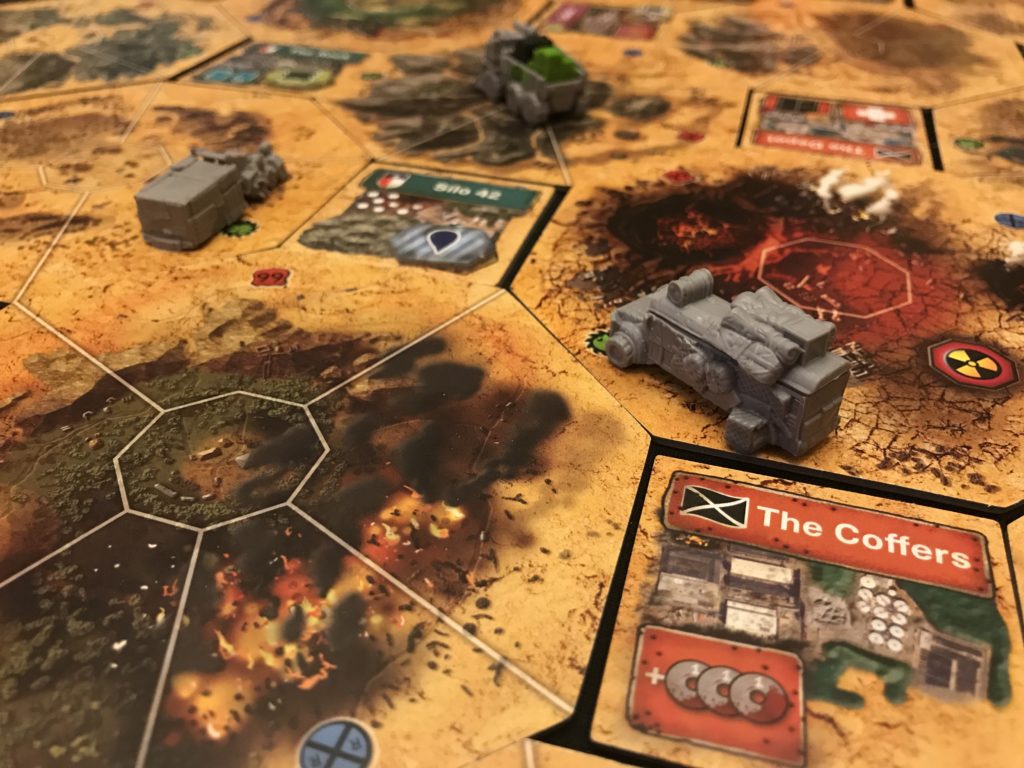 You’ll take 5 actions per turn but each is a very concrete and simple action. They’re all laid out on a clever action board making it easy to see what you do. The most common action is moving-the waste is large and full of open space-and moving is as simple as putting one of your tokens into the move box. From here you have a choice. If you’re arrived at your destination you can slide that token into one of the other options allowing you to gain a sense of accomplishment as you rumble into an outpost and buy, sell, or fight something. If you don’t slide into a bonus action then your next movement speeds up as your truck picks up momentum and barrels across the landscape.

It’s impossible to overstate how much I love this action system. This rapid series of micro-actions virtually eliminates downtime while still pacing your sense of accomplishment to the staccato of a homemade machine gun. A pick up and deliver game inherently strings together small goals-get this, take it there-and the action system here reinforces that. As you complete your contracts and earn ”$crap” you’ll get to invest in your vehicle and escalate that efficient action system. Turbos make your truck mover further while cargo holds let you carry more and more stuff through the waste. Gunners and allies give you the power to raid trucks and enclaves so you can ignore the supply market and take what you want at gunpoint.

It’s a fun system, though limited spaces and high demand can create situations where players fill their trucks rapidly and disengage with the system. WEDS’ greatest strength-its streamlined simplicity-may also be its (only) weakness. Upgrading your truck is as easy as filling up your blueprint with a few tokens and once upgraded you may never need to revisit. Enemies don’t scale with the players or get stronger over time, so with a couple upgrades you can almost make the die-rolling combat an afterthought as the odds are stacked heavily in your favor. The simplicity is present in other areas as well. There are three factions with rich flavor-text fueled backstories but they’re mechanically identical on the board. Raider Truck and Enclave cards are decorated with fascinating unique characters, but they all fight exactly the same. 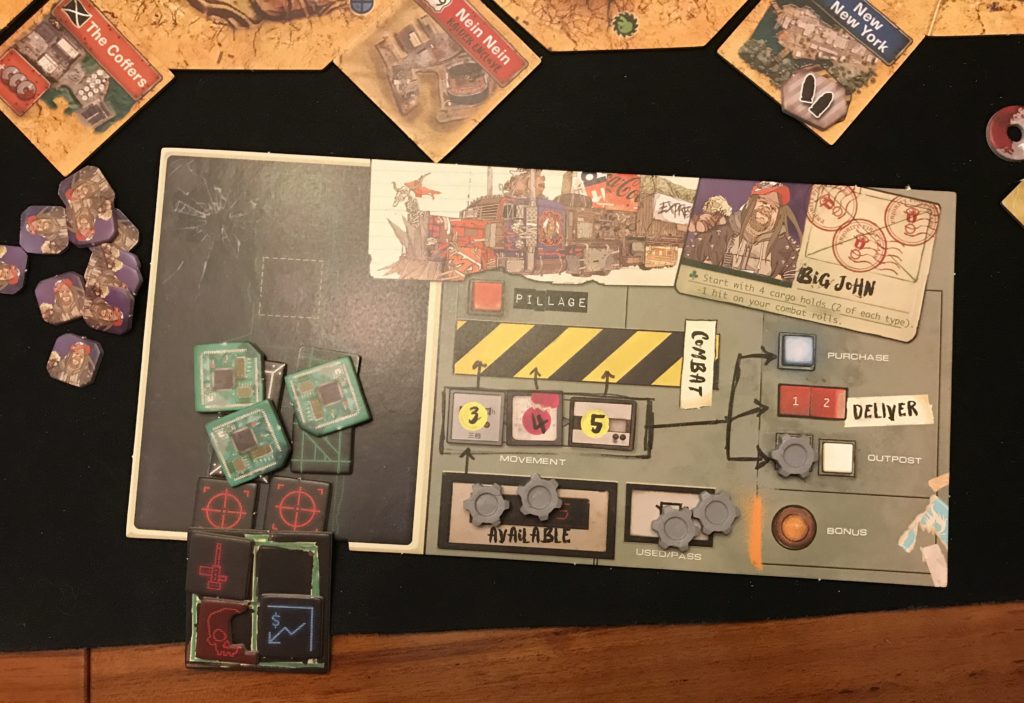 However, the trade off is worth it. This game is deep and rich and yet can clock it at around 80 minutes. That’s rare in this genre. The fast action system and svelte decision trees also keep the pace roaring like the engine on your miniature trucks. While not all the mechanics reinforce the setting, the Priority One contracts make up for it. Winning a game of Wasteland Express means being the first to complete 3 “Priority First-Class Contracts”. Three of these are drawn publicly at the beginning of the game and each of reinforces the setting in excellent ways. The Nuke Delivery I mentioned is one of them and it gives you your own Fury Road homage right on the table. Another sees you outfitting your truck with a backhoe and digging up the waste as you look for treasure. My favorite may be the one that sets you out on your own 3-part Vision Quest.

These narrative public quests anchor you firmly in the world the designers have created and bring the waste to life. The world is realized just enough that you can feel that you’re exploring it, while not bogging things down. I’d certainly take more in a future expansion-faction variety, unique raider mechanics-but that isn’t meant as a knock against the base game. I don’t want more because there’s something missing, I want more because I can’t get enough.

What would you upgrade your truck with: guns or cargo?