Blast City Brings The Weird To Board Games - Nerdist

Blast City Brings The Weird To Board Games

Blast City Games is an atypical small press publisher run by designer Nate Hayden. Espousing an underground punk attitude, he’s relied on pre-orders and word of mouth as opposed to Kickstarter and mainstream distribution. And boy has it worked.

If you design the weird and patently insane, people will buy it–especially if the actual game design is extraordinarily good.

Cave Evil put Blast City on the map. Published in partnership with Nate’s second company, The Emperors Of Eternal Evil (EEE), this design was a joint affair. Jochen Hartmann and Mat Brinkman entered the fold to collaborate on one of the most evocative and outright metal board games in existence. 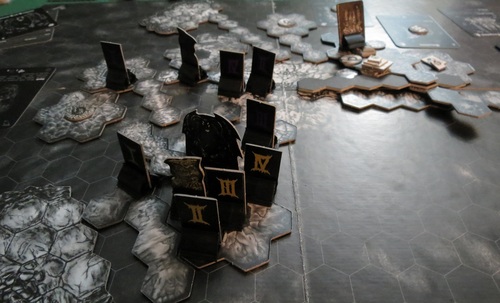 This design is pure aesthetic and attitude. It features hundreds of black and white illustrations adorning a plethora of cards, a brooding paper map housing oddly shaped tiles, and standees that modestly occupy the bedlam of the game’s underground necropolis. Opening the box and pawing through the components gives off a very old-school and harsh vibe that is extended through the wargame mechanisms.

Players take on the roles of Necromancers summoning undead abominations from the supernatural cavern. They compete head-to-head, digging out tunnels and discovering forbidden secrets. You manage squads of troops, and the game leaves its mark with its sheer volume and variety of creatures. You have all kinds of strange atrocities like Necromonks, Insanity Demons, and Hellion Lords.

You gather resources, items, and minions to battle each other to the death. Meanwhile the Dark Pit gathers power to unleash an ultimate evil and push back against the rising tide. The experience as a whole is best described as over-the-top and completely memorable. It’s vicious, cut-throat, and wild. Cave Evil is simply Cave Evil and no game really scratches the same festering itch.

It’s unfortunate this is long out of print but it’s successor, Warcults, is just around the corner and currently available for pre-order.

On the heels of the success of Cave Evil’s first printing came the equally bizarre Mushroom Eaters. This Nate Hayden solo project goes so far off the rails most won’t believe when you describe it. Here players take on the roles of canny individuals submitting to an extended acid trip as they follow the Shaman on a journey of enlightenment. The goal is to become the new practitioner and guide the others through altered reality. 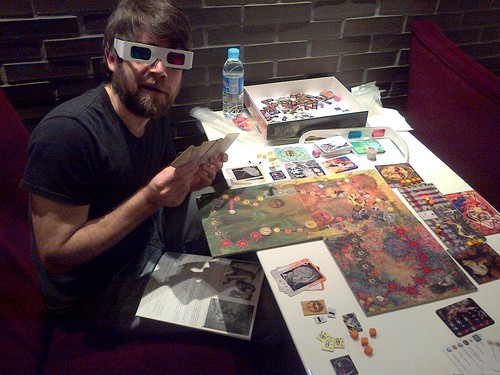 Despite initial impressions, the game discourages individuals from actually inducing psychedelics during play. Rather, players don 3D glasses and lay their eyes upon the ridiculously ornate board that folds out gradually as play progresses. With patterns and colors becoming more kaleidoscopic as the journey endures, you’re never quite settled or complacent. And that’s where this game resides in that uncomfortable foreign state of conscious that keeps you focused yet on edge.

While The Mushroom Eaters doesn’t boast the staying power or replayability of Cave Evil, it earns its coveted place on your shelf as an unparalleled experience. This is the type of game that you pull out once a year or so and blow someone’s mind, altering their perspective on the hobby permanently.

Psycho Raiders is the most recent release from Blast City, as Nate hooked up with EEE yet again to produce another design which can’t quite be placed in a box. In this case, I’m speaking from a literal perspective, as this is their first in a line of magazine titles. BYO-Scissors is now a thing, as you have to actually cut out the game’s cards and assemble the components prior to play.

Gameplay consists of players taking on the role of a psychotic group of hillbilly murder prophets or lusty teens fleeing from their pursuers. Rules are detailed and table-heavy as vehicles can break down and locals from the nearby town can even be hailed via screaming. Hiding, searching, and of course bloody 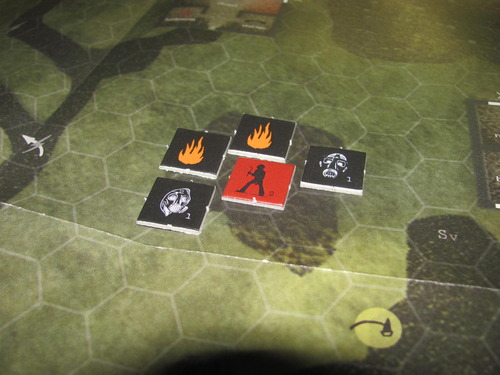 violence all have detailed systems. Psycho Raiders is certainly not for the faint of heart.

This is the only game I’ve ever experienced that produces emotions bordering on full out dread. Your heart races as you’re up against the wall and evading a collection of monstrous beings that can easily shred you apart. Mistakes are deadly and you’re playing for keeps. This is oft-repeated when discussing this collection of games, but there’s nothing out there quite like it.

Blast City doesn’t produce the type of titles you can easily swing by your local game store to pick up. However, they do publish the type of designs that stick out on your shelf as noteworthy achievements in the table top arena. Unlike the mainstream deluge, these releases prompt you to share and evangelize for both their oddball niche and their unparalleled narrative experiences.

What are your favorite independent games? Is weird and unique enough to draw your interest? Tell us in the comments below!

All images courtesy of BGG