Jeff Lemire is one of the most prolific and unique comic book creators working in comics today, and we’re super excited to report that we’ll soon be seeing a massive expansion of his Black Hammer universe as Legendary entertainment have acquired the property for film and TV! The Dark Horse series which Lemire created alongside British artist Dean Ormston is a radical genre-bending exploration of superhero tropes set in the Twilight Zone-ish small town of Rockwood.The original title focused on a group of heroes who get trapped in a strange town after defeating the terrifying Anti-God and since then it’s become a sprawling series beloved by fans of indie comics and superheroes. The title has has already spawned three spin-off series; Sherlock Frankenstein, Doctor Star and The Quantum Age. 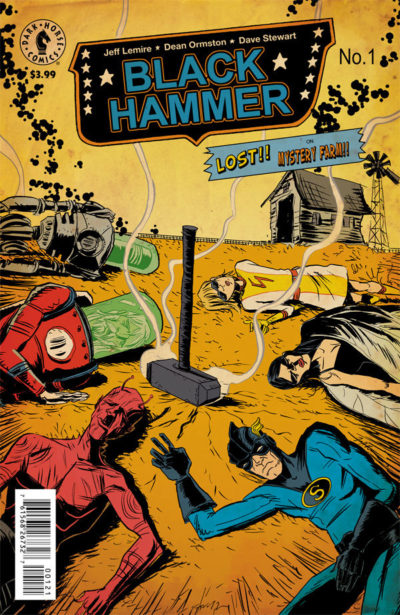 In a press release, Legendary described what drew them to the series.”Black Hammer is an epic multi-book saga of interweaving stories â€“ both past and present â€“ detailing the trials and tribulations of the heroes as well as the villains of Spiral City. Itâ€™s a genre-bending series that pushes the limits of what a superhero story can be, while always creating deep metaphors for human experiences. In Black Hammer, the characters come first, and the super hero aspects become the canvas to tell their stories.”Both Lemire and Ormston will serve as Executive Producers, and we’re really excited to see Black Hammer brought to life as it has already established a pretty sprawling universe that could make for a brilliant new on screen franchise. Are you a fan? Can’t wait to see these characters in your living room? Let us know below!