Big Games that Got Better with a Second Edition - Nerdist

Big Games that Got Better with a Second Edition

One of the best things about board games is the sheer variety of experiences that they can produce. Everything from quick filler games all the way up to lengthy epics that might require a nap after playing. And sometimes, even when those epic games are awesome, a new edition comes out that makes them even better. We’ve talked about the new Mansions of Madness before. But here are three more games that were highly improved by tweaks in their second edition. 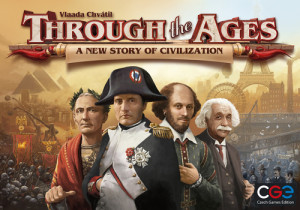 Debuting initially in 2004, Through the Ages is about taking your civilization from antiquity all the way up to the modern day. You can build ancient wonders like the Pyramids or the Colossus – or modern wonders like Space Flight and the Internet. You can evolve from despotic government to monarchy, theocracy, or democracy. And, of course, you can develop technology and create theaters, libraries, and more.

The original game was fantastic. While a session takes about an hour per player (if everyone is experienced), it was well worth the time investment. Players were constantly focused on developing their culture while ensuring that they had a large enough military to defend it. In Through the Ages, having a large military is rarely enough to win you the game. But a weak one is often enough to make you lose.

Still, it had a couple of issues. A few leaders that were more sought after or rarely taken. A few cards that should see slight adjustments in their costs. And, the game was nothing pretty to look at. In 2015, the new edition game out. Through the Ages: A New Story of Civilization arrived. Sporting all new artwork, it rebalanced all the leaders and technologies. It changed the way military combat was conducted and how tactics were distributed in order to shake out some of the luck that was inherent in the prior version. Having ten years of plays – including data from untold numbers of online games – meant that it was tweaked to near perfection.

War of the Ring

War of the Ring seeks to retell the story of the Lord of the Rings trilogy – complete with ring bearers trying to infiltrate Mordor. It is a complicated and intricate game. The Shadow Armies must conquer important Free Peoples territory to win. Meanwhile, the Free Peoples are using their armies to buy time for Frodo and Sam to make it to Mount Doom. The game even recreates the Free Peoples’ reluctance to fight by requiring brash action by the Shadow Player or the intervention of the Fellowship.

The First Edition of War of the Ring is a wonderful gaming experience. It really feels like Lord of the Rings in a box. Not only do you get to move armies across Middle Earth, but you also have cards that represent discrete events from the novels or create interesting “what ifs” that fit within the flavor and context of the story. But it wasn’t a perfect game. It was widely believed that the Shadow player had an advantage. Plus, there was a known exploit where, with the right cards, the ringbearers could be prevented from entering Mordor almost indefinitely.

Enter the Second Edition of War of the Ring. First, the map got a design shift. It went from a “realistic but difficult to read” map to something a little more game friendly. It also tweaked the game to avoid the exploit and shifted the balance between the asymmetric powers back to even. The result is a game that not only recreates the trilogy, but also is a finely tuned gaming experience. 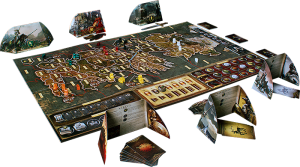 Full disclosure: I haven’t read the books. But can you blame me? They are chock full of spoilers for the show! But Game of Thrones: the Board Game puts players in the roles of the Great Houses vying for the Iron Throne. While military might is an important part of the strategy, even more so is diplomacy. Fragile alliances are made and broken throughout the game and that’s the core of what separates Game of Thrones from other dudes-on-a-map games.

The first edition was relatively simple and focused mostly on land forces. But it definitely needed sprucing up. A few expansions were released that allowed the addition of ports to the board and wildlings to the game. Fully expanded, it provided a relatively robust experience, if a bit clunky.

Enter the second edition. The second edition of Game of Thrones incorporated some previous expansion elements (like ports) natively. This allowed them to be more cohesive and eliminated some of the more annoying strategies of blocking a player’s ship production. A few other minor changes here or there brought the game to its epic greatness. Sure, there are still a few balance issues (House Lannister tends to be in the weakest starting position), but the second edition is definitely the definitive version – at least until a third edition is announced.

What Second Editions have you played that really improved over the first? Tell us about them in the comments.

TAGGED: war of the ring, Through the Ages, Game of Thrones, Board Games