I think most gamers agree that Love Letter is a fantastic game. It’s tiny, inexpensive, easy to learn, and it’s a ton of fun to play. In certain situations, my game group needs a little bit more than what Love Letter offers.

Lost Legacy is based on the rules system of Love Letter so the gameplay will seem very familiar. There are 16 cards and every player starts with one in their hand. On your turn, you draw a card and then you play a card and trigger its ability.

There are a couple of key differences in the gameplay, though. For one, instead of trying to eliminate other players or gain the highest ranking card, you are trying to locate a card named “Lost Legacy” (*gasp*) and position yourself to be the first to guess where it is. There is also an area on the table known as the Ruins that contains cards that are hidden to all players. In other words, you spend a little more time moving cards and deducing than in Love Letter.

Lost Legacy has a fantastic theme, too! As the story goes, a starship crashed onto the planet eons ago, scattering debris across the world. Those parts of the ship that survived the impact have become legendary landmarks and artifacts known as Lost Legacies. Magic also exists in the land and the ship’s remnants interact with this magic in interesting ways.

Within the game, there are exotic characters that have fascinating bits of lore associated with them. Characters such as the Sister of Fate, the Dreamreader, and the Phantom Thief. These characters show up on cards in the game and since most cards have little text on them, a lot of attention is spent on the quality game art.

What really makes Lost Legacy stand out from Love Letter, though, is its ability to be mixed with other Lost Legacy decks. That’s because Lost Legacy was designed to be customized. You can take cards from one deck and swap them out with the corresponding cards in another deck to create a very different game experience. Not only that, but you can also mix two whole decks together and increase the maximum number of players from 4 to 6! Oh how I would love for Love Letter to go up to 6 players!

Right now there are four game boxes of Lost Legacy. There are the original two games, Flying Garden and The Starship, that each contains one deck of 16 cards. This year, AEG released two new game boxes: the Second Chronicle and Third Chronicle. These boxes each come with two decks of 16 cards. This is really exciting because these new boxes aren’t expansions. You can buy just one of the 2-deck boxes, get your game on with up to 6 players, and customize it with other decks as you see fit. This adds TONS of replayability! 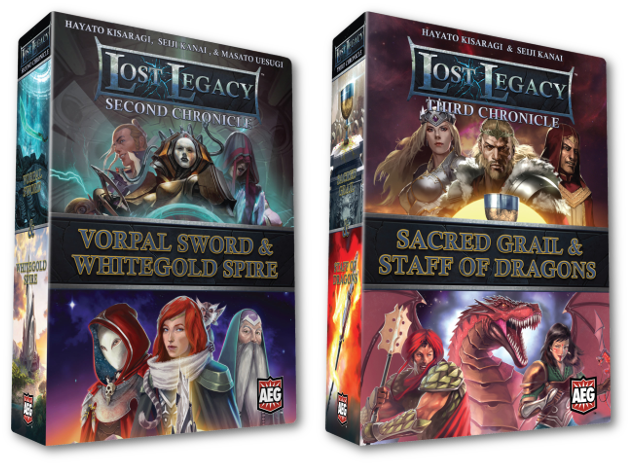 If you’re a fan of Love Letter, give Lost Legacy a shot. If you’re totally new to the Love Letter rules, check it out on TableTop. Each game adds totally new cards, awesome art, a little more story, lots of replayability, and it is still easy to play. This isn’t one of those games where you have to buy all the extra decks either, you can totally get by with just one of the box sets if you want to.

I also can’t help but wonder if you could mash together three or four decks to support even more than 6 players!