Is it possible that The Beach Bum and Dazed and Confused could exist within the same cinematic universe? It’s not hard to imagine that Matthew McConaughey’s Wooderson from Richard Linklater’s ‘70s-set stoner classic may have ended up as a middle-aged Key West burnout named Moondog in Harmony Korine’s ode to garish South Florida tackiness. Both Wooderson and Moondog exist in a semi-permanent heavy-lidded marijuana haze, chasing every scrap of pleasure they might wring out of life. Moondog feels like a natural extension of the persona that McConaughey expressed in his very first film credit, and it just might be McConaughey’s most bravura performance yet.

As a narrative, The Beach Bum is a loose, episodic film that serves merely as a showcase for McConaughey’s acting, who disappears into Moondog, a sun-bleached salty dog clad in chunky white sneakers, flip-up sunglasses, and hideously printed matching shirt and shorts sets. Tourist-trap souvenir shop—but make it fashion. The look does a lot, but McConaughey brings a nearly Method approach to his embodiment of this character, whom one could call “the Bard of the Beach.” Moondog is a poet, you see, gleaning inspiration from the grodiest beach bars in the Keys. “I’m a bottom feeder,” he tells his wife Minnie (Isla Fisher), when she calls to summon him back to Miami for their daughter’s wedding. 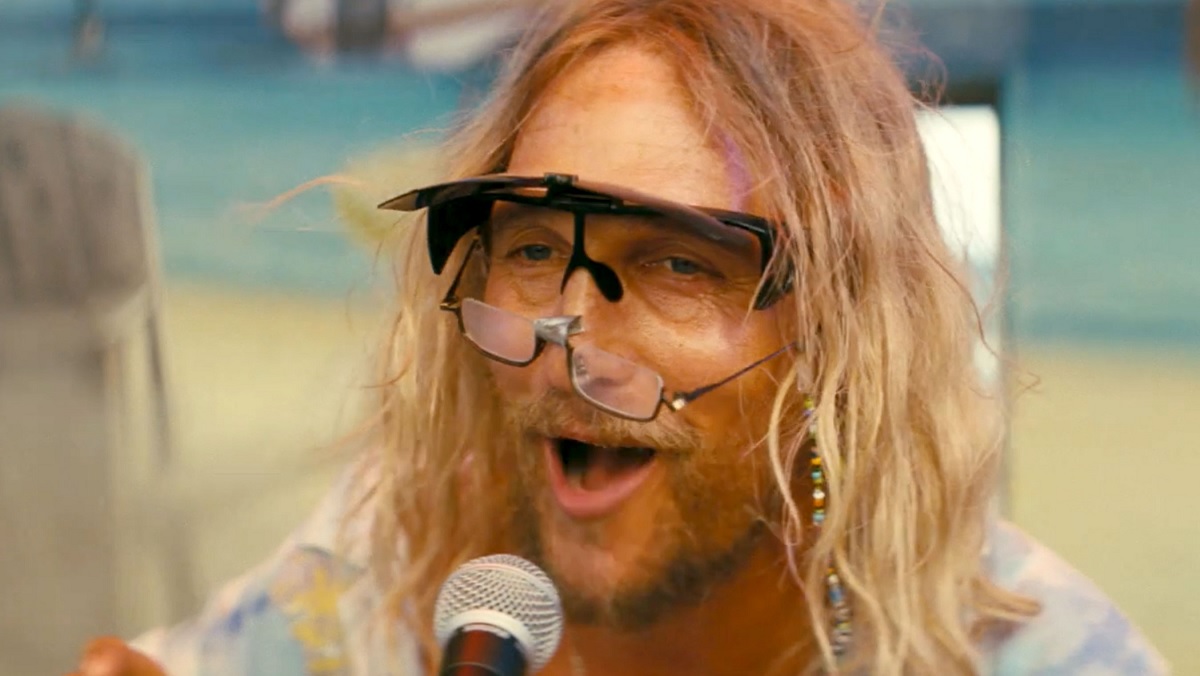 A shock awaits when Moondog motors back to the mainland in a run-down, spray-painted dinghy—Minnie and Moondog are rich. Loaded in fact. It doesn’t seem quite fair for this white, middle-aged dropout to simply coast on his wife’s wealth, burning joints, guzzling PBR tallboys, and hitting the green with his book agent (Jonah Hill, in pink-patterned pants with a Foghorn Leghorn accent), so the film tries to level the playing field and introduce some conflict to Moondog’s easy, breezy life. After Minnie passes in a tragic accident, it turns out that her will stipulates Moondog’s inheritance is frozen until he publishes his next book. It’s the kick in the pants that he needs to write, to get out into the world. Watching him slum in an ocean-front mansion isn’t the fun of this movie anyway.

The strength of The Beach Bum is in its visuals, the vibe it captures as a mood board/tone poem. Snatches of images burn into your brain: a boa wrapped around Moondog’s bongo drum that he plays aboard a ramshackle houseboat; a pink neon-lit room housing a marijuana Christmas tree; Zac Efron’s panini press sideburns; a schooner stacked with cash going up in flames. The world that exists in montage, in the pitch-perfect needle drops on the soundtrack, in the rhythm of Moondog’s transient existence—that is where The Beach Bum finds its real flow.

The story itself feels like an afterthought—one that could have used a bit more thought, truthfully. The tale of a ne’er-do-well charlatan coasting and causing a ruckus on inherited wealth isn’t exactly sympathetic, and the truth is that we want to like Moondog. He makes himself hard to love at times, and this particular story doesn’t give him the assist he needs. Korine could have more rigorously interrogated the larger social context of Moondog’s life further, but he simply doesn’t.

If you can look past the larger, more problematic, and less necessary plot and the hacky slapstick moments, and focus instead on the story that floats by, minute to minute, there’s a lot of fun to be found in the sandy crevices of The Beach Bum. Ultimately, it’s the tale of Moondog and his compadres—the ones who get him. Whether it’s his soulmate Minnie, who appreciates her man for exactly who he is, his family friend Lingerie (Snoop Dogg), his new friend Flicker (Efron), who loves Jesus Christ, the band Creed, and breaks them out of rehab, or his old friend Captain Wack (Martin Lawrence), Moondog always finds or makes a friend along the way.

In that sense, he’s is the epitome of mindfulness, in that he exists only in his present moment, loving the ones he’s with. Man, he’s just happy to be here, and that ethos is positively infectious, leaving you with an all-natural high (and no need for an antibiotic).