BBC's Sherlock Is Now A Manga, Because The Universe Is Fundamentally Good - Nerdist

BBC’s Sherlock Is Now A Manga, Because The Universe Is Fundamentally Good

Sherlock, and the Tumblr-era enthusiasm it inspires, really shows how universal Sir Author Conan Doyle’s stories are; resonating with audiences in whatever time, on whichever side of the Atlantic. But if you think a Sherlock manga might somehow stretch that appeal too far, then you simply haven’t been looking closely enough at modern comics. Blockbuster Death Note is a Holmes-ian thriller featuring no less than three master detectives. One of the biggest shonen series ever, Detective Conan, stars a junior sleuth. And you needn’t great deductive powers to discern whom it’s named after.

Now, with that mind, take a gander at this excerpt from the manga in question and its stylized-yet-still-so-accurate interpretation of Misters Freeman and Cumberbatch. Isn’t it a smart fit for Sherlock? 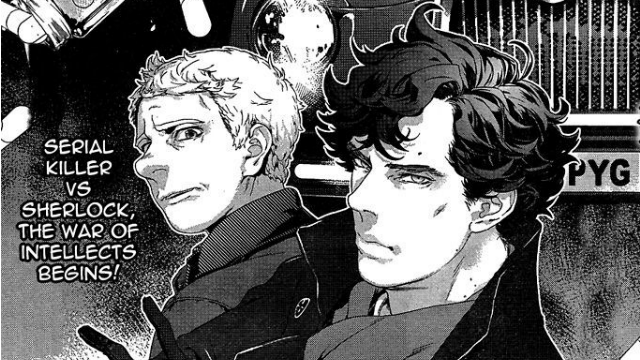 The adaptations of the episodes “A Study in Pink” and “The Blind Baker” by the mononymous artist Jay have been rolling out since 2012, but only now can Titan Comics bring them to English readers. Why has the import been so long in coming? Patience is just part of Sherlock fandom, perhaps. We’re still in the middle of a three-year hiatus between seasons, no? And if Season 4 can’t come soon enough, maybe this newer perspective on the first couple episodes will tide you over once Titan releases them in June.

Now, the niche of Western screen-to-manga adaptations is small, but still fascinating. Back in the late 90s, TokyoPop put out manga versions of every Star Wars movie up through Phantom Menace, allotting multiple volumes and hundreds of pages to each story. With plenty of room for cinematic storytelling, they might be the best Star Wars adaptations ever, actually. So nobody should look at these manga volumes as mere rehashes. Not at all.

Could these books whet your thirst for Sherlock? What other Western shows might benefit from a reinterpretation in sequential art? Let us know in the talkback!