Aragorn, Gandalf, Rudy, and all those little Bagginses are back. You may have never played it, but the Lord of the Rings miniatures game from Games Workshop was kind of a big deal. It presented a system that functioned in stark contrast to Warhammer Fantasy. In backrooms lined with unpainted miniatures and cast off terrain, this unique ruleset is often spoken of as one of the best GW has ever released.

Yet Lord of the Rings has sort of slowly faded on the backburner. It found a revival with the release of the Hobbit films as it was given its second major systems revision, although it benefitted from numerous incremental editions. Now it’s received a third. Battle of Pelennor Fieldsis is legit. 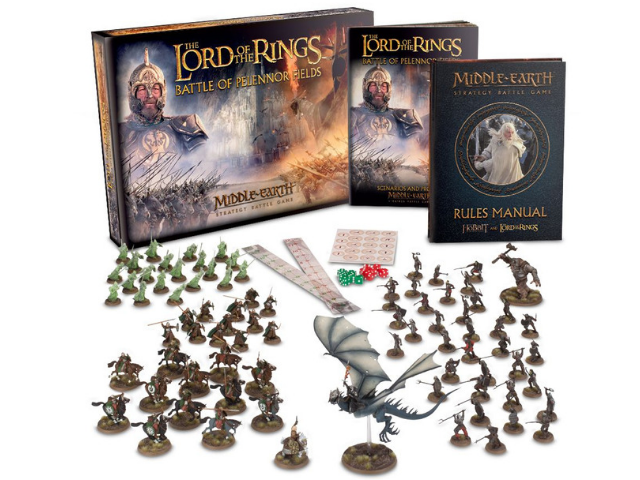 The game is now a consolidated brand – the Middle Earth Strategy Battle game – including both Hobbit and Lord of the Rings material. This boxed set kicks off the new era with a fist brandishing steel.

First things first we need to talk about value. This release is a bit insane. It’s one of the best value propositions Games Workshop has ever offered, including $400 worth of miniatures at a consumer MSRP of $150. We have Riders of Rohan, a ferocious troll, the flying Nazgul, and a smattering of infantry. Now, we have seen all of these sculpts before. Nothing here is truly new except for the fantastic Theoden models, including an option on foot or mounted.

Even more astounding is how complete this package is. In addition to the wonderful rulebook and bits and bobs like dice, you receive two full sized armies. In case you’re new to this sort of thing, a boxed set featuring a complete experience is virtually unheard of. Usually it’s just a taste of a full retinue of troops, enough to wet your beak and drag you into a serial line of purchases. Battle of Pelennor Fields is therefore quite the oddity existing as a full experience. And we’ll take it. 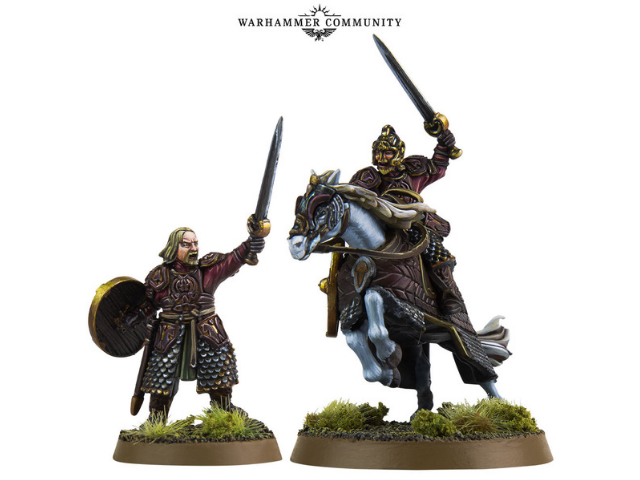 Of course, this is a game and it has rules – they’re quite good. Usually in this sort of thing, a player takes his turn by charging into melee and throwing handfuls of dice. You’re looking for a certain target number, for instance trying to roll a four or higher on a six-sider. In the Middle Earth Strategy Battle Game, both contestants roll a die or two and the individual with a higher single result wins.

So say you’re charging across the war-torn ground with Theoden himself. And you charge straight into a monstrous Orc, ready to tear off your head and gargle your blood. You both toss dice and maybe this lowly mudsucker bests you. Well, you’re not a run-of-the-mill soldier, you’re Theoden – the 17th King of Rohan, last of the second line of the royal house of Eorl. So you can adjust your result by spending some Might. Hero’s gonna hero after all.

This is a cinematic game. That mechanism of heroes spending a limited resource to nudge fate their way is representing of Tolkien authoring events, through player decision, and driving play towards courageous moments of desperate survival. It can certainly be a hero-focused game and you’ll find yourself wanting to expand things by adding Gandalf and the gang, but the system proves interesting even when running some scruffy swordbearers from the realms of man.

Supporting this cinematic feel is a strong dynamic flow. Units are presented in a more skirmish format, approaching a structure akin to Kill Team. That fight system will result in dramatic moments, but it’s actually surprisingly difficult to kill troops off due to the wound roll. This is compensated for with a commonly seen morale concept where your army faces possibly breaking and fleeing the battle. 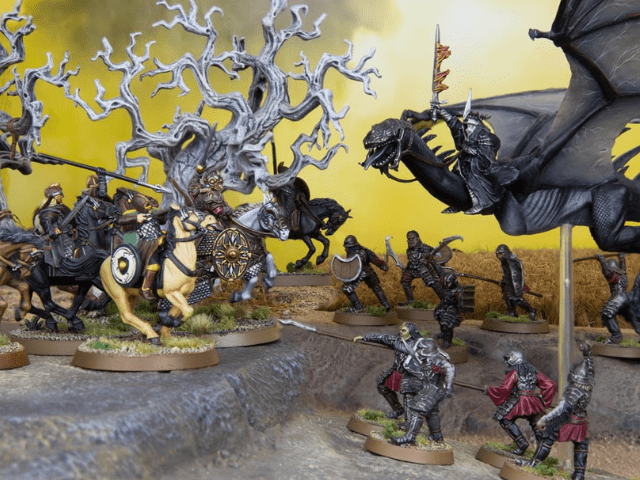 A strong suit of this release is the four varied narrative scenarios. It features a wide range of tasks and objectives and keeps your eyes focused beyond just driving crooked steel into each other’s guts. Each builds upon the previous and introduces new rules and concepts to ease you into the full experience.

This set in particular seems a little more focused on recreating moments in the film version of the battle. The system as a whole is split somewhat evenly between allowing for narrative setups such as this and matched play in a more competitive format. Those seeking the latter will notice that the The Dead allied with Rohan here do not make particularly strong allies mechanically. Unless Aragorn is included on the side of good (a separate purchase) then they don’t take advantage of the full-blown ally synergy in the system.

The book does a good job of pointing the spotlight towards the future. It offers guidelines for expanding these forces and touches on the rebranded system as a whole. Games Workshop stores will be stocking the plastic kits again and this feels like a fully supported product that’s intended to be lifted off the shelf and played.

This is a fantastic entry point into an underrated nook of the Games Workshop empire. It’s a cinematic system that offers a unique experience, functioning as a blend of skirmish and larger forces. Anyone sitting at that cross-section of Tolkien fan and miniatures gamer will eat this right up. Thankfully, we now have a way to get back to saving Middle Earth.

Have you played the Lord of the Rings Miniatures Game? Let us know in the comments!  And be sure to join host Becca Scott on Game the Game every Thursday here on Geek & Sundry to watch the best boardgames played with fantastic guests!

More Lord of the Rings Goodness!

TAGGED: Games Workshop, Lord of the Rings, The Hobbit, warhammer