Why BATMAN BEYOND Should Be The Next Live-Action Dark Knight

Two decades ago Bruce Timm, Alan Burnett, andÂ Paul Dini had the unenviable task of following a network mandate about making a “teenage Batman cartoon show” called Batman Beyond. They decided to think outside the box, making a follow up to their already classic Batman: The Animated Series, but setting in a neo-noir future, with a teenage boy named Terry McGinnis taking up the mantle of the Dark Knight from an elderly, embittered Bruce Wayne.What sounded dubious on paper ended up being amazing. Batman Beyond was relatively short-lived, but it certainly has remained in the hearts and minds of Batman fans all this time, to the point where DC Comics has made the character a staple of the comics lore as well. But on this, the 20th anniversary of Batman Beyond‘s series premiere, we are going to make the case for why it would make for a truly schway live-action Batman movie (schway means”cool” in future Gotham slang, by the way.)

A Big Superhero Film Set In The Future

In this modern age of superhero blockbusters, we have seen the early years of many superheroes, from Batman to Spidey and everyone in between. But we’ve never visited any of these iconic heroes in the future, seeing how they fared after it was time to hang up their capes, with the exception of Logan, which feels more like an alternate present. Batman Beyond can do what no other live-action superhero film has done before, giving us a version of an iconic hero in their twilight years, and set in a high tech future world we’ve never experienced before. And, of course, we believe Michael Keaton should definitely play Old Man Bruce.

A Legacy Superhero For The Big Screen

When Batman Beyond premiered, a lot of fans were skeptical, as Batman had never really been a “legacy” character in his 60 year history, unlike Flash or Green Lantern. Batman was always Bruce Wayne. But Batman Beyond proved it could work, with teenage Terry McGinnis showing he had what it takes to stand on his own. Into the Spider-Verse did it as an animated movie, but Batman Beyond could do it in live-action. It could also be an opportunity to give us a diversely cast Batman movie for the first time, as who is to say Terry isn’t of Latin descent, or Asian, or mixed race? 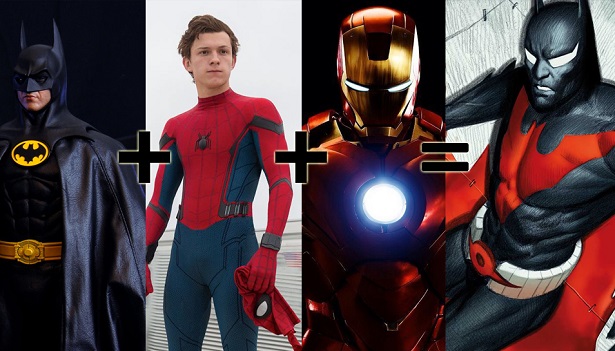 Whether he was created to be this way or not, it turns outÂ Batman Beyond is maybe the ultimate mash-up superhero. He’s part Batman (obviously), but also all his teenage problems and foibles make him like Spider-Man too. Thrown in the high tech suit of armor and the corporate intrigue, and it’s Iron ManÂ as well. Who wouldn’t want to see those three iconic heroes melded into one cool package in live-action?

While there have been many great superhero movies in the past several years, their musical scores have not been that memorable. But one of the coolest scores of the past decade was the futuristic sounding electronic score by Daft Punk for TRON: Legacy, a score that is way better than the movie itself, in my opinion. Just on a musical level, a futuristic electronic score like that one could make Batman Beyond sound like no other superhero movie out there. Actually, we say go ahead and just hire Daft Punk to do it.Batman Beyond is a fresh take on a familiar character, and has a fresh roster of villains to bring to the screen. We don’t need any other versions of the Joker or Two-Face, but we’d kill to see Blight or Inque on the big screen. It might be just the thing DC needs to do to breathe some life into its Batman films without having to go back to the Frank Miller well again.