Batkid, the Savior of San Francisco, Is Cancer Free - Nerdist

Batkid, the Savior of San Francisco, Is Cancer Free

With a barrage of horrible news flooding our social media feeds on a daily (okay, hourly) basis, here is a bit of positive and uplifting news to brighten your day via CBS: the young leukemia patient who was given the nickname Batkid when he saved Gotham City, a.k.a. San Francisco, five years ago and melted everyone’s hearts, is cancer-free. He’s been in remission for five years.[brightcove video_id=”5968095334001″ brightcove_account_id=”3653334524001″ brightcove_player_id=”rJs2ZD8x”]For those who don’t remember, back in 2013, Miles Scott, a five year old boy fighting cancer, had his dreams come true when the Make-a-Wish Foundation transformed his hometown of San FranciscoÂ into Gotham City with all of its assorted heroes and villains. Thousands crowded the streets to see Miles dressed as Batman (Batkid) in action, and President Obama even made a Vine in honor of Batkid (yeah, remember Vine?). There’s even a documentary about Miles, titled Batkid Begins. 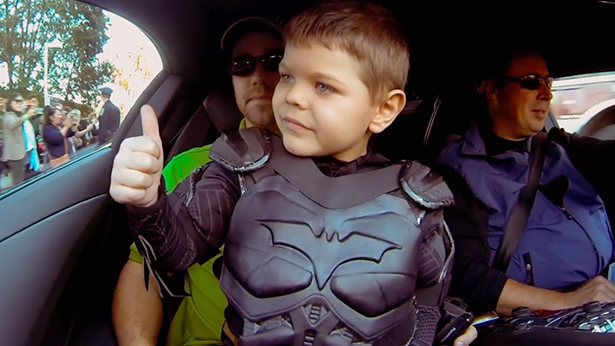 Having given up crime fighting in his later years, Miles is now reported to be living a relatively normal life, consisting of playing Little League and helping out with chores on his parent’s farm. No word yet on if he will ever don the cape and cowl again, but I think the world needs a true hero like Batkid. Here’s hoping Miles answers the call again should that Bat-Signal ever light the night sky.Did this new give you a glimmer of hope today? Be sure to let us know in the comments below.