Let’s say you’re attending AwesomeCon in Washington D.C., and you want to keep the geeky fun going after the convention doors close. Danielle Ward of Little Petal and Jordan Ellis of Jordandene have got you covered with their Friday night geek girl after-party. But just as Ward and Ellis are extraordinary geeks, this is no ordinary after-party.

Their Geek Girl After-Party, held on Friday, June 16th from 8pm-1am, will be thrown in the name of charity.

The entrance fee ($10 in advance) and all raffle tickets (more on that in a mo) will be going toward To Write Love on Her Arms, a non-profit supporting those who suffer from depression, addiction, self-harming, and suicidal ideation.

It’s a charity near and dear to their hearts. Ward suffers from depression and is a recovering alcoholic; the party coincidentally falls on the anniversary of five years of her sobriety. And Ellis, who frequently donates items to charities she believes in, says, TWLOHA “is a charity doing things that I think are really important: helping and empowering people who are struggling.”

According to Mental Health America, 40 million Americans suffer from depression, and while 500,000 Americans attempt suicide every year, 30,000 Americans succeed. Ward believes these problems are more keenly felt in geek culture.

Ward said, “The nerd community is a group of humans who have felt largely misunderstood their entire lives. We wanted to throw a party to show these women that they are not alone. We see them, and we are in this together.”

In addition, this party will be celebrating female geek crafters and their works. For an extra fee, attendees can purchase raffle tickets for prizes that are made by female geek artisans. These prizes include a Wonder Woman shield pillow, a Star Wars wallet, a Doctor Who goody bag, a mystery subscription box, and more.

Ward and Ellis wanted to celebrate female artisans specifically. As Kimberly Graziano Wall of Black Rabbit Tattoos, who will be offering a $100 gift certificate for her otaku tattoos, wrote on the event page, “Women thrive in an environment where they are mutually supported and treated as equals in their industry…where sex/gender does not dictate someone’s worth.”

Note that people of all genders are more than welcome to attend and try to snag those prizes for themselves. Don’t have an Awesomecon ticket? Not a problem. Keep in mind the fee at the door is $15.

Ward and Ellis have another motive for the party. Ellis said, “When you’re selling, you don’t get to hang out and make real-life connections.”

As Ward said, “I’m excited to get to actually talk to my customers.”

Want to attend the Girl Girl After Party? Click here for details. 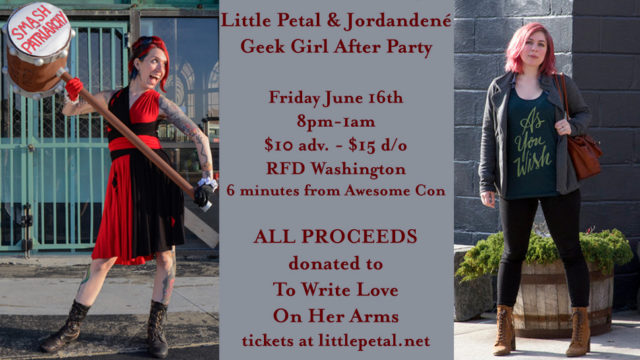 Find The Right Board Game To Match Your Personality