Meet Bearcoon, a band made up of two lovely ladies, Andrea (Guitarist) and Solange (Vocals), who have the best chemistry you will ever see on stage. Maybe it has something to do with the fact that they are the coolest couple (who just got engaged!) you will ever meet and were literally brought together by music.

The Long Beach based Bearcoon won the 2014 Buskerfest Music Festival and used their winnings to record their debut full length album, El Guapo. After their first performance on the stream, the album quickly hit #1 on the New Folk Releases Chart on Amazon and also sold out on CD Baby. Bearcoon became the first band to be asked back for an encore performance on Geek & Sundry Twitch Channel.

While they’re now on the road as full time musicians, we’re still keeping tabs on the band. Get to know Bearcoon a little better as they share about how they got to know the Geek & Sundry community.

What have you learned about the community?

Solange: They are very generous. They seem like really awesome people and seem to have a really cool community.

Andrea: It seems pretty tight knit, from my experience. And it was fun also because when we went out on the road, we got to meet some people who had seen us on Geek & Sundry. We actually went and played in Santa Rosa because someone had seen us on the show and was messaging us and asking if we are going to play there. We were finally able to book a show where they lived [and] they came out to the show to meet us. We would like to send a shout out to Julie. She was the one who kept putting up “Last Record Store” hype on the screen the second time we played on the show.

The first time we played G&S, we got a ton of album downloads. The second time we played we still had a bunch of album downloads and were overwhelmed by the generosity of that community to have raised funds to get our van fixed, so that we can keep doing what we’re doing. We were totally blown away and ultimately that money will allow us to make the van a more hospitable living environment. It’ll allow us to keep on truckin’. 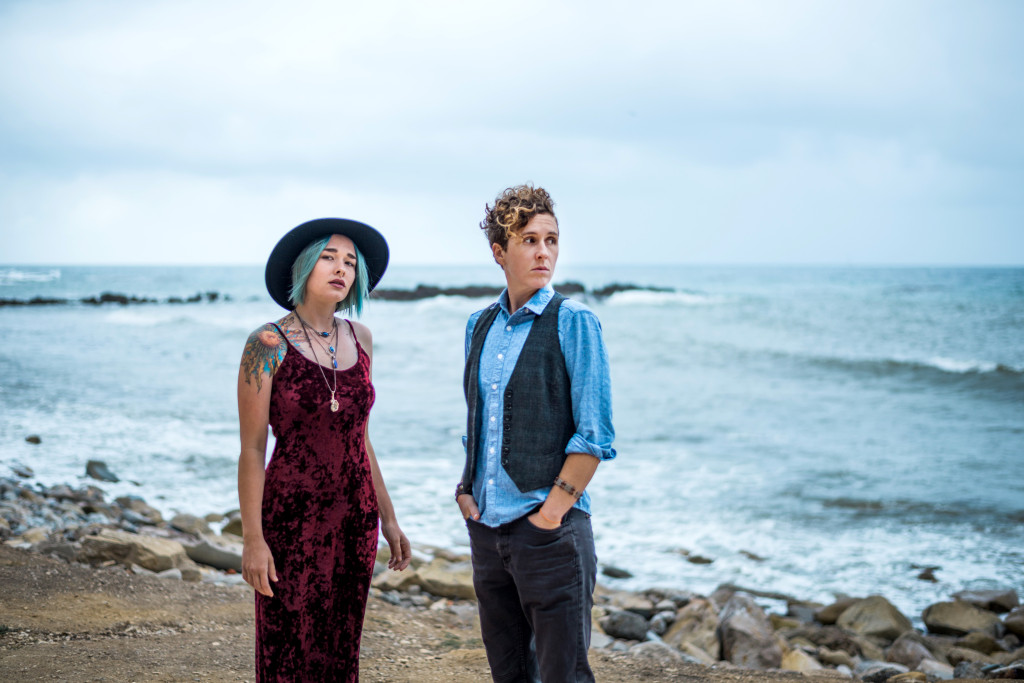 What do you geek out about?

Solange: Rocks and Barbara Streisand. Our engagement rings are stones instead of gems.

Andrea: Geodes, minerals, rocks & crystals [as Andrea pulls out a handful of rocks from her pocket and identifies them]. Solange has a hobby and side business of wrapping stones as jewelry pieces for sale.

How did the band form?

Andrea: Solange and I informally met at a party. A friend had asked Solange to play a song and encouraged her to pick up my guitar. She picked up my guitar and I remember thinking that girl really needs to put down my guitar, but she sang so well that I thought, I really want to make a band with her. Her voice was so incredible and I was blown away. We really didn’t talk that night, but within a month or two, we started to run into one another at Portfolio’s Coffee House open mic night. I asked Solange if she wanted to make a band.

Solange: We actually started dating and made the band at the same time. We formed the band in August and our first show was in September.

What was your most trying moment?

Andrea: My mom passed away about 1 year after we met. I couldn’t write songs for about 9 months after that.

What song holds the most meaning for you guys?

Both: “Cold Steel of Night”

Andrea: I wrote the chorus 2 months before my mom passed and the verses 6 months after my mom passed. It’s a very comforting and healing song for me, even now when we perform it.

On Twitch, we do more than just play games: we introduce new talents to (and into) our welcoming community. If you’re looking for a place to find some of the best indie bands around, join us on Fridays around 8pm!