This Augmented Reality Tattoo Generates a SONIC THE HEDGEHOG Game

Capturing imaginary PokÃ©mon is the only experience many of us have with augmented reality. We chased all of them, but now we want to run after this new chance to play another classic game in AR, and this time we’d have real skin in the game. Kinda. Because this augmented reality tattoo will let us play Sonic the Hedgehog.Olo Sabandija shared his incredible augmented reality tattoo on Twitter, and it’s even cooler than it sounds. He made it using Unity, the open-source programming suite many popular video games also employ. The way it works is that his real tattoo, the NES controller, serves as a marker that the augmented reality program recognizes. It then uses the real one to generate the AR tattoo’s video and images. But his “tattoo” doesn’t just look amazing, it also allows you to “play” a rudimentary version of Sonic. (“Play” because for now he can only make him jump.)

Here’s a direct from the screen version of my AR tat pic.twitter.com/CuIYaDZT6m

At first glance it looks like this exists entirely in a virtual reality world, but look closely and you’ll realize that’s actually his arm. Not only is that incredibly cool, but unlike a real tattoo, it’s easy to hit “reset” if you don’t like how it turned out.Our own Dan Casey spoke toÂ Sabandija about how he designed it and the problems he had to deal with (which explain why he used an NES controller for the definitive Sega game)….What was the hardest part of designing your tattoo?To find something that was meaningful enough to me to become a permanent image on my skin, but also something that could be easily recognized by the AR engine. So it had to be made of straight lines with sharp edges and very high contrast.I made several designs that worked fine on paper, but failed when temporarily transferred to my skin until I started going down to basic shapes. It seems to be easier for the app to track basic shapes. 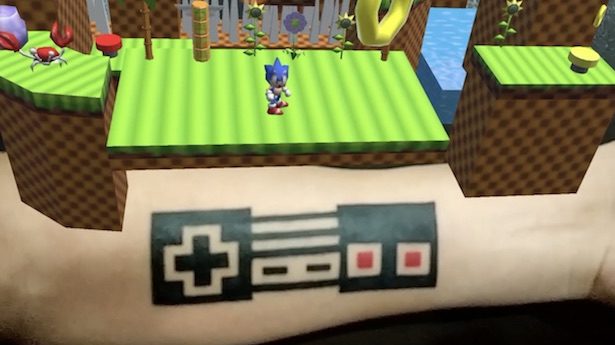 Why did you choose an NES controller?I was actually a hardcore SEGA fan back in the day, so when I decided I wanted my tattoo to be interactive my first choice was a Genesis controller. Sadly, using only straight lines took away its essence. I found no reasonable way to draw a Genesis controller in the style needed for the marker, so I went with the second choice. The NES controller is iconic by now, and also made out of straight lines. I actually made it out of several squares so the lines would be at the same distance from each other at all places.Also I have very fond memories of me and my cousins carefully deciding which cartridge to rent for the weekend, because we could only afford one. Sometimes we picked a good game, sometimes not. 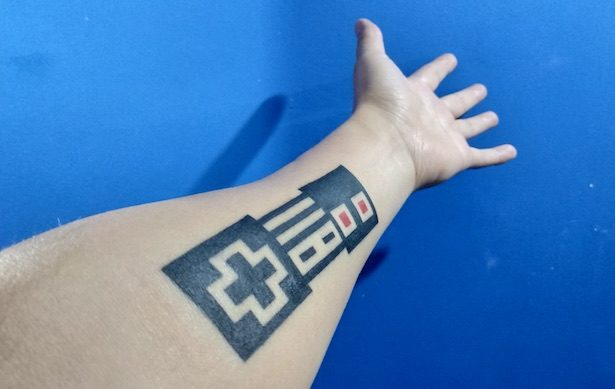 Are there plans to make it fully playable?I basically learned the basics of Unity in the last month. In theory I can make a playable game, but I’m still several online tutorials away from that, and it would need to be a game like Arkanoid or Space Invaders, where you only move side to side and maybe down. I can make all sides of the D-pad interactive, but activating only the up part without also triggering the sides would make most games unplayable.Even just making Sonic jump is incredible. The only thing we can do with a non-AR tattoo is make a hula skirt shake.What video game would you most want to have as an augmented reality tattoo? Hit play on your best idea in our comments below.