At E3, Ubisoft unveiled its latest Assassin’s Creed installment, Odyssey, which will include a notable new feature for the franchise: not only will you be able to choose whether to play as a man or a woman, you’ll also be able to romance other characters. What’s more, you’ll have free rein to romance whomever you wish, regardless of their gender.

Odyssey takes place in 431 BCE, and you can play as one of two versions of a spear-wielding mercenary: Alexios or Kassandra. Who you choose as a protagonist will have no change on the conversations and plot, and the romance options will be the same for both characters. https://www.youtube.com/watch?v=eSw6JeHge1Y

Giving players their choice of love interests and their character’s sexual orientation was a decision that narrative design director Mel MacCoubrey said to IGN was integral to creating a more unique, personal experience for each player:

“With our focus on relatedness between the player and the game, we wanted a story that would impact people…we thought it would be better to place those romances in the world, to have their own stories to be able to develop those stories further, instead of forcing an opinion on you as a player.”

In the E3 gameplay walkthrough, game director Scott Philips emphasizes that “choice is key” to Odyssey. The ability to personalize the protagonist’s journey is an important step forward for a franchise built on the concept of being able to fully inhabit another person and immerse yourself in their history. The romance option, combined with a new multiple choice dialogue system and the possibility for alternate endings, makes Odyssey wholeheartedly an RPG that aims to deliver what MacCoubrey told IGN are “grey,” nuanced interactions. In terms of romance, this could potentially mean anything from being able to flirt with, have serious relationships with, or get your advances rebuffed by an individual of any gender. In other words, Odyssey will be able to mirror real life, in all of its joy, embarrassment, and heartbreak, better than ever before.

It’s Odyssey’s equal approach to these romantic interactions that is most notable, as other franchises have been criticized in the past for offering fewer love interests depending on the gender and orientation of the character, and most games don’t even bother to offer anything outside of a set heterosexual relationship. On one hand, there is a practical reason for why Alexios and Kassandra can woo the same characters. BioWare’s Dragon Age, the franchise often brought up in discussions of LGBT+ romances, has experienced both praise and scorn for this very mechanic. In response to the backlash over characters being designed as bisexual, David Gaider, the lead writer of Dragon Age 2, told Game Rant that “the truth is that making a romance available for both genders is far less costly than creating an entirely new one. Does it create some issues of implementation? Sure—but anything you try on this front is going to have its issues.”

This may very well be the case for Odyssey, and if anything this stands as a rebuke for those who have a problem with the fact that the option to pursue a same-sex romance even exists. By engineering the game that way, the creators likely freed up time and money better put to use on refining the main story and mechanics, which can only translate to a more enjoyable gaming experience. But production value aside, there’s also the simple fact that LGBT+ people deserve to feel like they have the same wealth of options and branching storylines as any straight player would.

In 2015, a Nielsen study found that 65% of LGBT+ gamers feel underrepresented in video games. That’s a disappointingly high statistic when we consider the demographics of gamers. In 2006, Jason Rockwood at the University of Illinois at Urbana-Champaign conducted a survey of 10,000 gamers and found that only 28% of participants labeled themselves as “completely heterosexual”; the large majority categorized themselves as falling somewhere on the Alfred Kinsey scale. 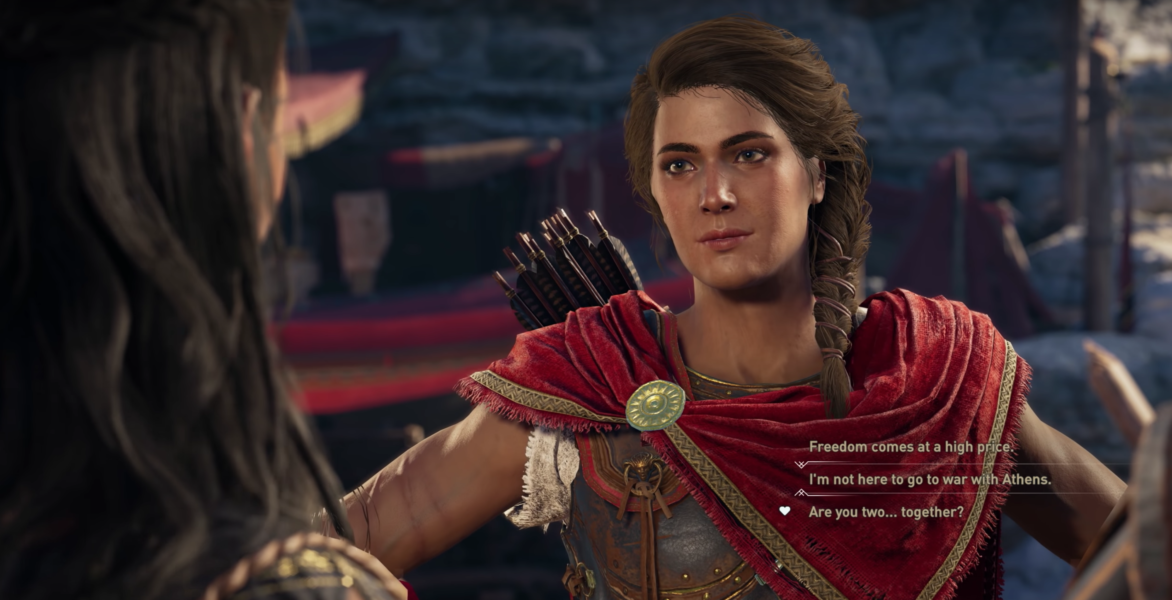 For many, sexuality is not a simple black-and-white issue, so it’s only fitting that games striving to be more realistic would reflect that. This even lines up with the time period Odyssey is set in, where Ancient Greeks didn’t perceive sexual orientation in the same way we do today, and many classic texts are either rife with subtext (like Homer’s Iliad) or plainly stated attraction (Sappho’s poems).

There are undoubtedly going to be folks who find this endeavor to be some sort of pandering or a waste of time. But if Ubisoft is shifting towards deeper, more believable character development and world immersion, romance and attraction—in all its nuances and permutations—is a natural part of being human. Plain and simple, Ubisoft is giving the audience the tools to pursue romance, and it is, as it should be both in and beyond games, entirely up to the individual what they choose to do with that. As McCoubrey says, “You do you, man.”

How do you feel about Assassin’s Creed becoming more of an RPG? Let us know in the comments!