Every hero is someone else’s villain. Getting that perfect arch-villain is integral to satisfy basic player needs of the chronicle. While mindless monsters are easy to grab and can make a giant splash, nothing simmers in a story better than a cunning rival.

Satine covers most aspects of villain design on this episode of GM Tips w/ Satine Phoenix and then interviews Peter Kyle about some of the epic villains he’s seen and how he writes them. Before we talk about another aspect of villains—get caught up below.

A good rule of thumb for any aspiring Evil Overlord is to double check their plans on the greatest evil list ever assembled: The Top 100 Things I’d Do If I Ever Became An Evil Overlord.

“I will not gloat over my enemies’ predicament before killing them.”

Villainous Organizations. We don’t need to look too far into our history to know that organizations can be villains. Everyone is curious about storm-troopers right? One advantage of large organizations is that it allows for a near endless amount of characters that can rise to dominance and become full antagonists. Even if you design them as the proverbial “good guys” and they can still serve as a challenge to players. In the game systems of Rifts, it is loaded with villain organizations, more so than most other game lines. Armageddon Unlimited, The Coalition, The Federation of Magic and so forth. What’s compelling about this, is that you can play a soldier or an agent as a player, and try to do good in the world. The same would go with any organization you build in your world.

When I’m designing an organization for a world, I start from the top down. I build either that council of rulers or single iconic arch-villain and then down into the henchmen. Nothing too detailed, just notes and a trait or two. Often times, I’ll plug in the gaps or start promoting henchmen up the ranks after players have a notable encounter.

Satine, when building an organization, be it a street gang or a multi-planet empire, what’s your org chart look like? Do you design from the top down from a single person, or do you sprawl up from a nation state to find the ruler?

“There are lots of ways to design organizations. I’ll see a group on the news and build from that idea up to a council of people and the history of how they came together and grew followers who became zealots that warped their message. Maybe I like a single bad guy, then build his world around him. Sometimes I think of a group of good guys who are viewed bad because of perspective.”

“I will not turn into a snake. It never helps.” 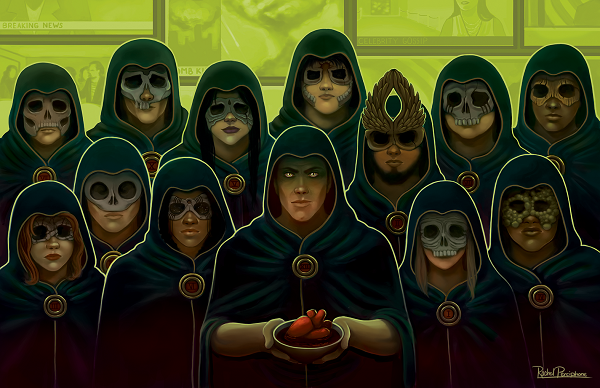 Style: every villain and organization needs to be fashionable. You just aren’t memorable if you aren’t. If you are post-apocalyptic raiders or an army of Orcs in full military uniform, it can completely set the tone for a villain right away. Being able to tell a character apart from their peers is a general rule of character design. Even if they all have similarities, have their weapons stand out, their hair, or even their race. But then tie it all together. I basically just browse the internet for cool pictures or beg my artist friends. I had Rachel Perciphone take my written quest to spawn my Council of Deathlords. Here is what Satine does!

What does the organization or villains clothing, outfits, and armor say about them? Do you have any advice on building or thinking of outfits?

“Efficiency, garb based on location, If they’re open about their organization then angular based on how they want to be perceived. Game of thrones is the perfect example of what costumes do to evoke emotions from people. In my last game I had a group of bad guys who didn’t look like they belong together, but I gave them the same scar along their face and chest. Think of history, price, availability.”

“I will never build a sentient computer smarter than I am.”

Don’t put your villains in a vacuum and that tip you had about keeping a journal of how they change themselves is fantastic. But, Satine, when players and adventurers DO start killing thousands of their followers, why isn’t it just a TPK if it’s gone too far? What in-game reasons do you use to stop mega-villain annihilation from happening?

“You have the say in how the players interact with the world. It is your choice on TPK or not based on the brutality of your character’s decisions. You could have TPK, you could have the characters arrested and interrogated and have to explain their way out of a situation or be executed. You could have the character’s lives owed to someone as long as they do a quest for someone. Roleplaying games are great because you have the ability to play in shades of good to bad vs black and white situations. NPCs have reasons to do one thing or another. The possibilities are as varied as there are histories.”

I’ve found lazy GM’s default to saying something like: “The story isn’t there yet.” There is truth to that, and it’s not fun to simply god-crush your players. I’ve found it’s much better to keep in-game reasons. One of my biggest ways is to ensure that they play by the same rules as the PC’s. Chances are, if its organization versus organization, the guys at the top are the ones fighting each other, and if the PC’s are a problem… the villain might go hire his own band of adventurers. One thing I always do though is this: have the villains start resurrecting themselves with the same magic the players use. If players get multiple tries. Why not the villains? This keeps the big guys at the top, at the top easier than playing the ladder game. Often, it makes better characters all around.

What are your villain tricks? How evil do you get in your games? Let us know in the comments below!