Ask the GM: Kids At The Table - Nerdist

Ask the GM: Kids At The Table

Halflings. Goblins. Shortstacks. Kids. Regardless of their height, the chances of someone’s offspring (or your own) edging in on your roleplaying game is more likely than ever. It was only a matter of time before kids discovered our arcane secrets. The rise of gaming culture and a focus on supporting your FLGS, we’ve let our guard down, and the little scamps have noticed. Now it’s Sunday afternoon and you are staring at your table and there is a pair of ten-year-old friends ready to play. Oh boy.

We’ve covered how to recruit your own spawn, or even the spawn of others, into your gaming hobbies before. But on GM Tips w/ Satine Phoenix, she invited local GM TL Frasqueri-Molina to share her expertise on the topic.

The obvious take away from this episode, is we need more stories about Pig Ninja. To facilitate that, here are techniques and questions Satine and I came up with about kids at the table.

In the episode, TL Frasqueri-Molina talks about setting clear rules and boundaries, and how to go about that. It’s okay to do THIS positive thing, but it’s not okay to do THIS negative thing. Solid advice, and in my experience, I’ve taken it a step further. Often, I’ll pull the kid to the side, and have a moment of one-on-one time with them. Get them grounded in the game, and why their characters are there—can have an immense payoff later in the game. It also shows them that you have their ear, and you are on their team. The other adults at the table waiting for their four-hour adventure will have to… well… be adults about this.

Satine, what do you see as the advantage of having one-on-one time with kids (even if it’s only 30 minutes) before putting them at the table?

I’m reluctant to encourage a prequel for individual kid characters. Video Games encourage kids to think the story is theirs. Tabletop games encourage group play. I do think it’s good for kids to have a moment with the GM to go over backstory and what the character represents. Explain how the character relates to the rest of the group. Maybe there is a character in the group they would protect, or that they see as a brother in arms. This helps teach kids how to play with the group and encourage them to share the spotlight.

I’ve got a ten-year-old who is into Kaiju like nobodies business. When it comes to storytelling for him, it’s the easiest thing in the world; play giant monsters. Getting him and his friends tied into a group, is a little more difficult. First off, you’ve got to make sure the game is interesting to them. Sadly, a D&D adventure into the realms of Faerun might not be something they care about. At. All. Luckily, there are other game systems out there to help. Changeling: The Dreaming is an old classic for me but I’ve got to say that Call of Catthulhu is a game changer in kid / parent cross play.

However, I’ve had a theory about Sidekick Quests for a while. I’ve found that if you have a kid and a parent at table, splitting them, actually helps. As in, if my kid and I were to play in a game together, he would not be playing my sidekick. He would be someone else’s. This encourages more role-play and removes some of the parent-crutch you are bound to get.

Satine, do you agree with this? Or do you think keeping people together is the way to go? What’s your experience?

It depends on the child. Some kids need the safety of mom sitting next to them in the beginning until they feel comfortable to play on their own. Some kids like playing on their own with mom on the other side of the room. Communicate with the kid on what would make them feel more comfortable. Ask them what they want. The kid will tell you if they want to jump in or be someone’s sidekick or play a separate quiet character. There isn’t an umbrella right or wrong way to do this. There is only communication with the child as an individual with their own boundaries. 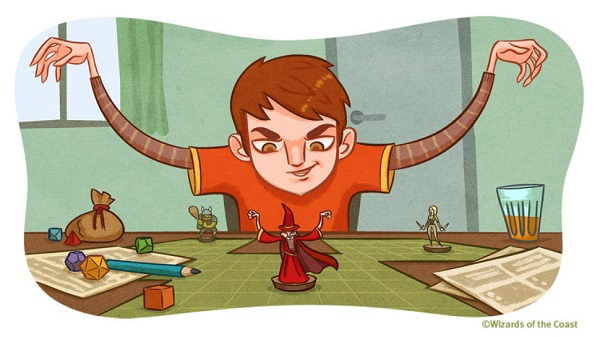 It’s happened… not just to me, but to many of my friends and people who work with kids. They want you to play in their game or help them get a game running. This is the time to sit down and have a serious conversation with your kid about this troubling time and the changes that will soon happen—player agency. I always advise younger GM’s these three things: make sure their story has an end, never kill their friends characters, and to print out power cards and monster sheets.

Satine, what are the top 3 most important things to tell kids embarking on their own campaign?

1: Have groups of monsters and NPCs ready even if you don’t plan on using them. Don’t over plan the story, over plan what they might run into.
2: It’s ok if the story goes somewhere else. Sometimes your players will change the story, just roll with it. They don’t know what you don’t know.
3: Don’t get upset with your players if they change your story. You’re all there to play together. Have fun with your friends. That’s the most important part.

Do you have any kids at your table? Or have you ran for them? Hit us up with questions in the comments or stalk us on Twitter!