‘Ascension’ Designer Challenges Gamers to Master the ‘Shards of Infinity’

Shards of Infinity is a fast-paced deck-building game from Justin Gary, a former Magic: The Gathering U.S. National Champion and the designer of Ascension. Like the best of Ascension mashed-up with the best of Star Realms, Shards of Infinity, developed by Stone Blade Entertainment and published by Ultra PRO, is easy to learn yet offers a deeper strategic experience than similar deck-builders. In the distant future, the Infinity Engine has been shattered and its reality-bending shards have destroyed most of the world. It’s up to you to rebuild the engine and wield its awe-inspiring power before your enemies get a hold of it.

You’ll build your army by recruiting allies, mercenaries, and champions from four different factions. You’ll also try to increase your mastery of the Infinity Shards, hoping to unleash the limitless power of the Infinity Engine. Using King of Tokyo-style character boards with dials, each player tracks their health and Mastery. Players deal damage to each other via their armies and when a player’s health hits zero, they’re done. The last player standing wins.

Shards of Infinity uses familiar deck-building mechanisms: shuffle your deck, draw five cards, play your cards to buy more cards and deal damage, then discard. Champion cards are like Constructs in Ascension, allowing cards to remain in play until an opponent targets them for destruction. And like the Moat in the Dominion base game, cards with a guard symbol can be revealed from your hand and absorb damage.

What sets Shards apart, though, are two new features: Mastery and mercenaries. Mastery is kept track on your character board and is used to unlock different cards’ abilities and effects. For example, if you have 10 Mastery and play a card that has an additional Mastery effect, then you’ll resolve that instead of (or in addition to) the standard text. It’s a terrific way to level up and strengthen your cards without clogging your deck. Fans of Mystic Vale’s card-crafting will recognize a similar effect in Mastery.

Mercenaries from all factions may be “fast-played” at any time. So, instead of buying a mercenary card and placing it in their discard pile, a player may spend the same amount to immediately gain that card’s effects. However, the card doesn’t go into their discard pile; it’s returned to the bottom of the draw deck. 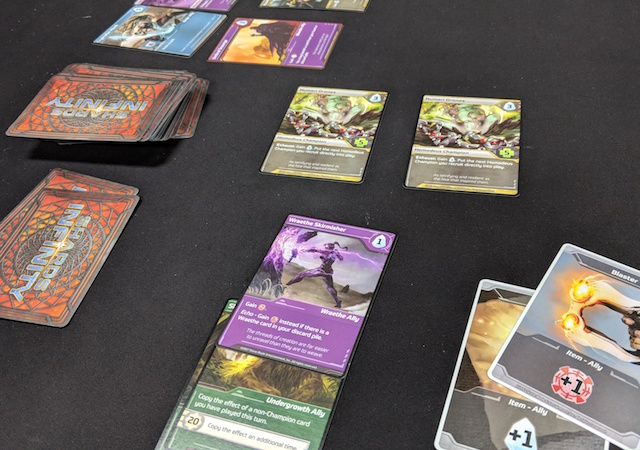 The Mastery stat and mercenary cards are two neat twists on the deck-building genre; both ramp up the game quickly and it’s possible to improve your starting deck without completely clogging it with the cards needed for killer combinations. With Mastery maxing out at 30, you’re often in race to hit that magic number, which gives you infinite damage when you play the Infinity Engine, thus ending the game. It’s a built-in timer that ensures games aren’t extended by players trying to build their perfect deck.

The game supports up to four players, but like Star Realms, it’s best as a head-to-head battle. Shards of Infinity will be a hit with deck-building fans and a lot of them will be replacing their well-worn copies of other deck builders with this well-crafted card game.

Do you play deck-building games? Tell us which ones in the comments!