4 Theories on Why Arya Will End GAME OF THRONES Alone

It’s remarkable how much we don’t know about Game of Thrones‘ final season. HBO has somehow prevented almost any leaks,Â big or small. But while we’re desperate to know more, all the secrecy also has lets us have fun wondering (and theorizing about) what will happen. It makes it all the more excitingÂ when we get even a possible sliver of insight into the final year, like we did this week when Maisie Williams told The Guardian that in her final “beautiful” scene she was “alone,” adding, “shocker! Aryaâ€™s always bloody alone.” We can’t help but let our imaginations run wild.So even though we’re not even sure if she was talking about the final scene scene she filmed as Arya, or (much more dramatically) Arya’s last scene on the show, we’re going into theory mode to decipher why, how, and where Arya will be alone when Game of Thrones leaves her. Because if you’re going to speculate, speculate wildly.

Possibility #1: Arya, the last one standing, sits on the Iron Throne, alone with her responsibility

It’s not hard to imagine the Great War and conflict with Cersei resulting in the deaths of almost every major player in the game. Since Arya is the ultimate survivor we can picture her being the only one standing when the dust settles. As a true born Stark she’d be more than worthy of ascending to the throne, especially if she helped defeat the White Walkers. That could give us the “bittersweet” ending George R.R. Martin has always talked about: Arya triumphant but alone, forced into a role she never wanted without her loved ones to help her. We can picture her sitting on Aegon’s chair alone in the Throne Room as the camera pulls back. Instead of being responsible for herself like she has been for years, Arya would be responsible for all of Westeros.Oh that would devastate us. Can’t possibly get sadder, right? Not even close. 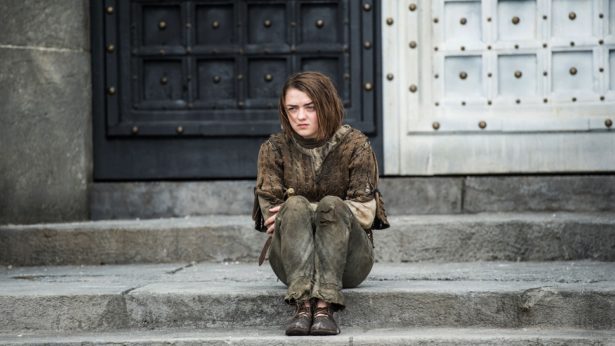 Possibility #2: Arya is the last living Stark and her final scene takes place at the Winterfell weirwood

Another “everyone is dead but Arya” scenario, but this one is far more personal, as Jon, Sansa, and Bran all fall in the victorious fight against the Night King. Instead of all of Westeros, Winterfell and the North fall to the last Stark still standing. Where would she go to mourn her family and ruminate on what has happened and what awaits her? One choice would be the Winterfell weirwood tree, where Ned used to go to reflect and pray to the old gods. And maybe while sitting there she hears a whisper, as though the tree is speaking to her, because somewhere in time Bran is with her even though she doesn’t know it.Ooooof. Okay, that will really ruin us. But somehow it’s not the saddest ending for her we can imagine. 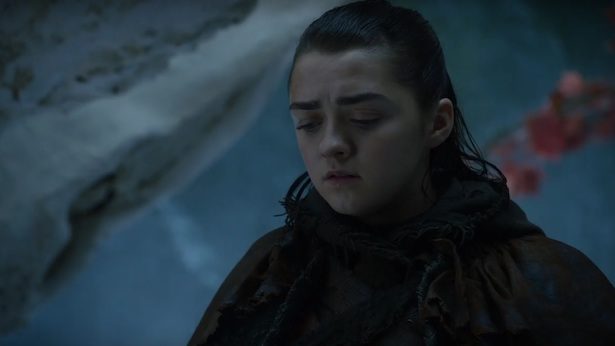 Possibility #3: To spare her family the pain, a wounded Arya goes off into the wild to die alone, where she’s joined by an “old friend”

You do realize Arya could die, right? Seriously, be prepared to watch Arya Stark die. Even though she’s a fan favorite and seemed invincible after the Waif stabbed her in the stomach, she is in fact mortal. And like an animal who goes off to hide when death approaches, we can see a fatally wounded Arya, knowing her time was short, retreat to the woods to protect her family from seeing it happen. Not just to hide them from the pain of losing her, but to give them some hope that she’s really out there somewhere, and that any smiling stranger could really be her.But while no human is with her she isn’t truly “alone,” because in her final moments Nymeria finds her and protects her one final time. 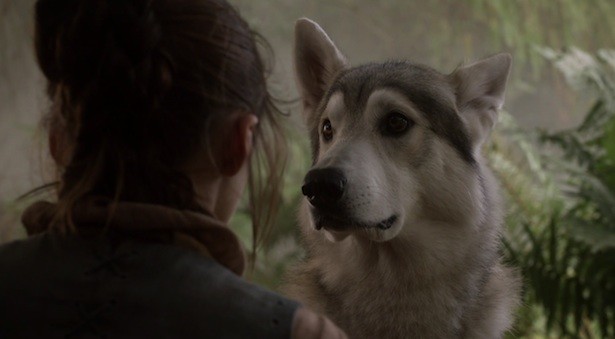 Okay we would never recover from that, so let’s end on a high note with one that wouldn’t make us cry.

Possibility #4: She’s alone after killing Cersei to complete her list

Cersei dead at the hands of a trusted servant, Arya removes one last face to show she has finally avenged her family and completed her list, and the last we see of her is a sad, bittersweet smile because this horrible “game” is finally over.Okay, we’d cry at that too, but then again we’re probably going to cry at whatever happens.What do you think Arya’s final “alone” moment could mean for her? Tell us in the comments section below.