THE ART OF SELF-DEFENSE Misses the Mark (Fantasia Fest)

I want to start this review of The Art of Self-Defense by saying that I think it’s good that men are making movies that try to dissect the idea of toxic masculinity. It’s something that director Riley Stearns imbues his entire sophomore offering with and for some it will likely strike a chord (as the multitude of positive reviews show). But for this reviewer, the purposefully blunt delivery and, ultimately, the message of the film fell flat.

Stearns’ debut feature is a brilliantly slow burn cult-centric flick called Faults. It showcased an eye for the strange and wonderful ability to build tension to a near fever pitch. Those are both skills that transfer to The Art of Self-Defense, but in a way that rather than leaving me satisfied and intrigued left me cold and uncomfortable. I think that on an objective level the film didn’t resonate with me for one reason: I don’t find the violence of men funny, and in The Art of Self-Defense toxic masculinity is always the punchline.

The film centers around Jesse Eisenberg’s Casey, an accountant who struggles to connect with the men around him, whether at work or outside of it. His fear of that interaction comes to a head when he gets viciously mugged by a motorcycle gang. Casey’s convalescence quickly becomes consumed with the concept of self-defense. He first seeks guidance in a gun shop where a droll shopkeeper delivers depressing facts about the dangers and realities of gun ownership before stating, “You’re going to love owning a gun”. Later, though, Casey discovers a local “Karate” dojo lead by Alessandro Nivola’s chillingly effective Sensei; from there on out Casey is on a one-way trip to Toxic-Masculinity-Ville. 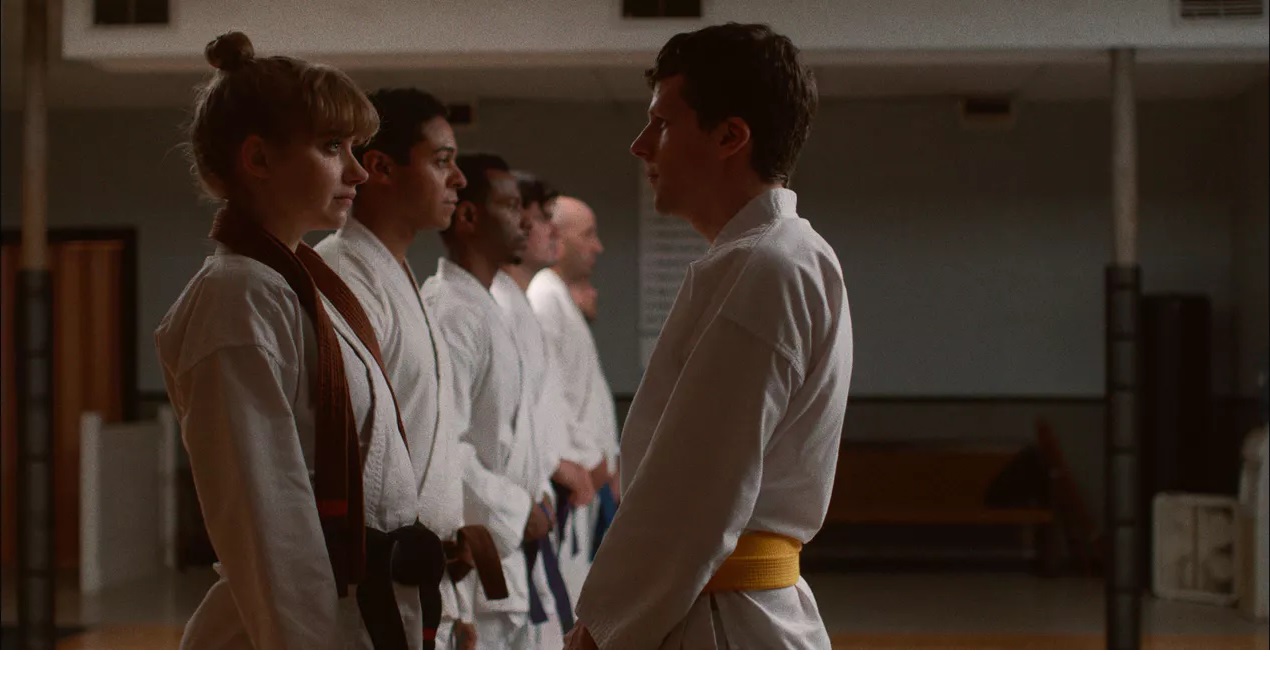 The Art of Self-Defense relies on a Yorgos Lathinmos-style delivery that comes off as Lobster-lite, with many of the cast speaking in a deliberately stilted and awkward way that for this viewer failed to add anything to the experience. During a particularly on-the-nose scene that aims to showcase Casey’s transformation, he punches his boss (one of the few people who’s been kind to him) in the throat whilst delivering a brief robot-like monologue about bosses and their relationship to workers. It’s moments like this that highlight how Stearns obviously understands the topics and ideas that he’s working with. For some reason, however, they didn’t translate to the screen in a way that spoke to this reviewer.

Something that immediately jumps out about The Art of Self-Defense and its exploration of toxic masculinity is that it’s very much centered on the male experience of that, which is vitally needed. It also might be why it didn’t work for me. As I watched Casey essentially turn into a violent fan of the misogynistic Sensei who hates the one woman in the film (Imogen Poots, who alongside Nivola is the best thing about the film) simply for the fact that she will never be a man. I never believed that Casey’s hero worship and toxicity wouldn’t extend to women around him, but his care and potential romantic interest in Anna always quells his rage, which rings untrue. The final act doesn’t help with this, making Anna both victim, savior, and saved in a move that weakens the film further. It feels like an afterthought to the centering of men and maleness.

Narratively the film is relatively simple and the big plot twist is easy to spot from very early on, but the The Art of Self-Defense clearly isn’t as bothered about solving its mystery as it is with the journey Casey and the audience go to get there. Ultimately the flick rang hollow when it came to emotional weight and humor offering up an ultimately empty and relatively surface-level exploration of masculinity that didn’t have the urgency, pull, or promise of Stearns’ feature debut.