Around the World in 8 Plays: Globetrot With These Awesome Boardgames - Nerdist

Around the World in 8 Plays: Globetrot With These Awesome Boardgames

Much like a book that transports you to places far and away, a great board game can take you to places that you’ve only dreamed of, all from the comfort of your tabletop. Best of all, you won’t have to deal with the TSA, worry about lost luggage, or suffer from jet lag.

Get your gaming passports ready, friends, and come with me as we travel the globe via these eight tabletop games. 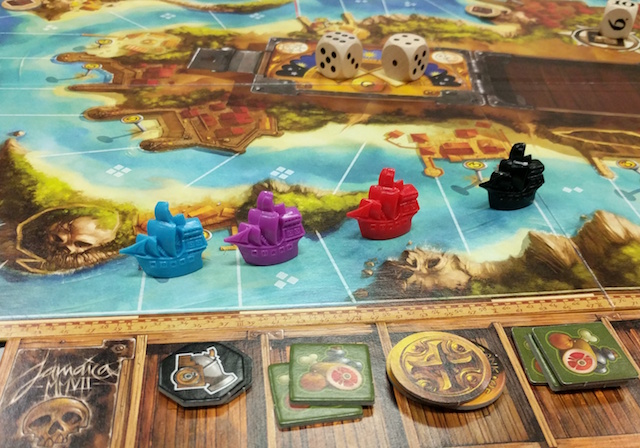 Let’s start our trip with the rollicking good time that is Jamaica, a game where each player guides their ship around the island to collect as much loot as possible. Of course, there are the inevitable showdowns with your opponents so you’ll have to load up on ammo to fight them off or else lose some of your bounty.

Although Jamaica may seem like a simple roll-and-move game, it’s structured to provide interesting decisions every turn. You’ll choose which die to use during the day phase and night phase and you’ll also decide which movement card to use. Do you try to move ahead in the race? Do you move backwards a spot or two to plunder a missed treasure? Or do you move to an opponent’s space to engage in combat? 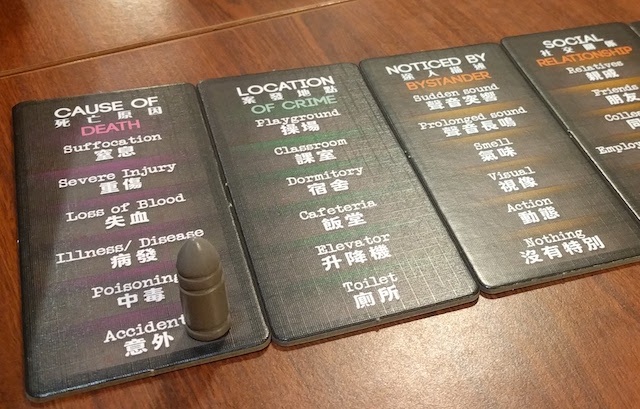 Of course, not every trip goes smoothly and we’ll have to stop off in Hong Kong to solve a murder. Taking the best elements of Codenames and Mysterium, Deception: Murder in Hong Kong is an outstanding social deduction game that plays well with a big crowd. One player is the forensic scientist while everyone else’s identities are secret, from the investigators and witnesses to the murderer and their accomplices.

The forensic scientist knows two things: a piece of key evidence and the means of the murder. They’ll provide clues via tokens placed on tiles that provide information to solve the mystery. It’s up to the players to deduce which one of them is the murderer. Of course, the murderer and their accomplices will be trying to steer the others away from the actual killer. What makes Deception: Murder in Hong Kong superior to other social-deduction titles is its lean and fast game play; it’s not uncommon to play several games in an hour. 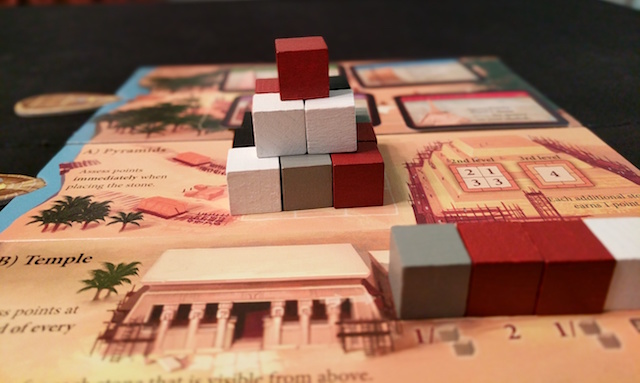 Not only do we travel to Egypt in this game, but we also travel back in time to build the world’s most famous monuments. You and your opponent are channeling your inner Imhotep, the earliest known architect. With a quarry full of stones, you’ll transport them to open land, where you’ll build pyramids, temples, burial chambers, and obelisks. If your opponents have beaten you to the spot, then go to the local market for special powers and more points.

This is a terrific gateway game that features enough extra goodies to satisfy more seasoned gamers. Watching the pyramids and other monuments being built is a delight and the tactile sensation of building is one that more games should incorporate into their design. 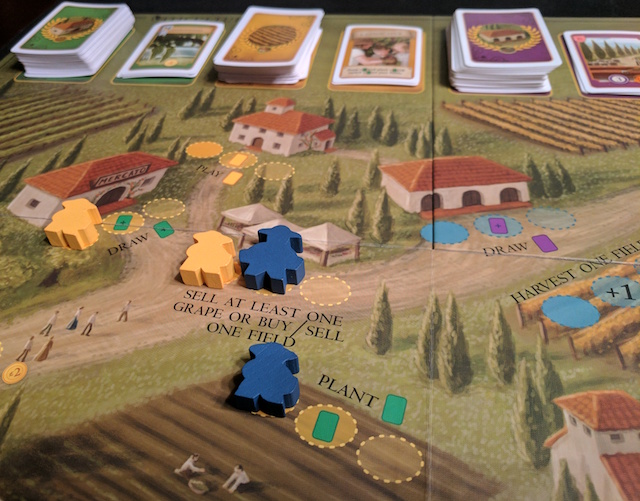 What better way to spend time in Italy than tending to a tiny vineyard in an attempt to manufacture the best wine in the region? This worker placement game is a tight, well-oiled machine of a game with several paths to victory. Each turn you’ll send your workers to grow grapes, harvest grapes, make wine, and fill orders to deliver the finished product to your customers.

Viticulture is a step up from gateway worker placement games like Stone Age and more satisfying as well, since its theme is perfectly matched to the game. And, yes, a glass of wine is the drink of choice when playing. 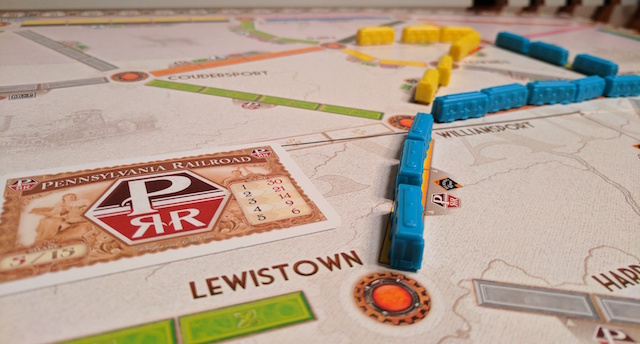 There are many maps available for Ticket to Ride covering many parts of the world, but I’m going back to where it all started: the good ol’ U.S. of A. While the base game has helped countless non-gamers become gamers (myself included), the Pennsylvania expansion is the perfect way to breathe new life into a well-worn classic.

The same basic turn structure is used in Ticket to Ride: Pennsylvania, but with one additional action: upon completing a route, a player chooses a stock from one or more companies listed on the route. As the game progresses, players attempt to accumulate the most in each company for bonus points. It’s a simple mechanism added to an already simple ruleset, but it adds just enough depth to get serious hobbyists to take another look at this classic. 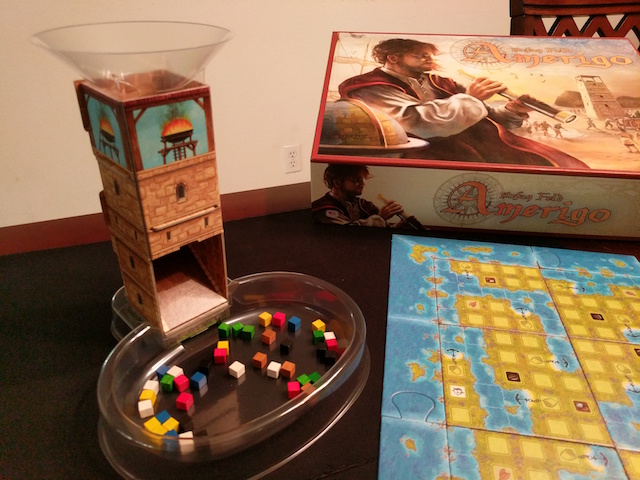 Stefan Feld has designed several well-regarded classics (The Castles of Burgundy, Trajan, etc.) and Amerigo is one of his most overlooked games. Here, you and your fellow gamers help Amerigo Vespucci as he explores the islands of South American. You’ll use the game’s unique cube tower on each turn: drop a fistful of cubes into the tower and whatever appears in the tray below determines your actions.

Like other Feld games, Amerigo features a point salad of various scoring options: settling islands, finishing islands, collecting goods, and building private and shared settlements. As you sail around the islands you’ll also have to fend off pirates. With its modular board providing a different game every time it’s on the table, Amerigo is an excellent game night option. And who can say no to such a cool-looking cube tower? 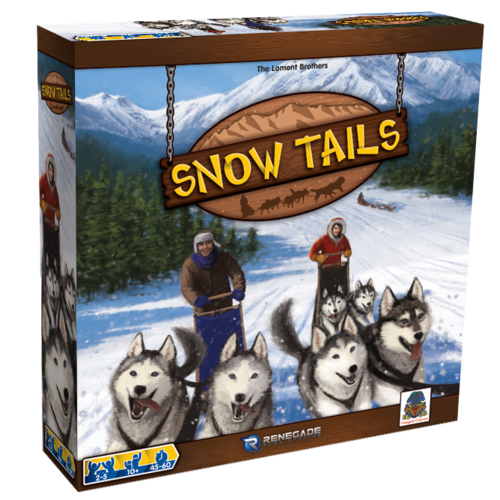 Here’s where traveling via your tabletop makes the most sense if you’re like me and have an aversion to freezing temperatures: take on the role of a sledder and ride your way to victory in Snow Tails. You’ll draw cards to guide your dog sleds along a randomly built course, with obstacles to avoid. Take too much damage and your sledding days are over as snow gets whipped into your face.

The game’s hand management mechanism makes for fast and elegant play as you maneuver your way around (and sometimes through) your opponents. It’s the most racing fun you’ll have outside of Formula D and you’ll find it tough to resist the urge to yell “Mush!” as you’re flying past the competition. 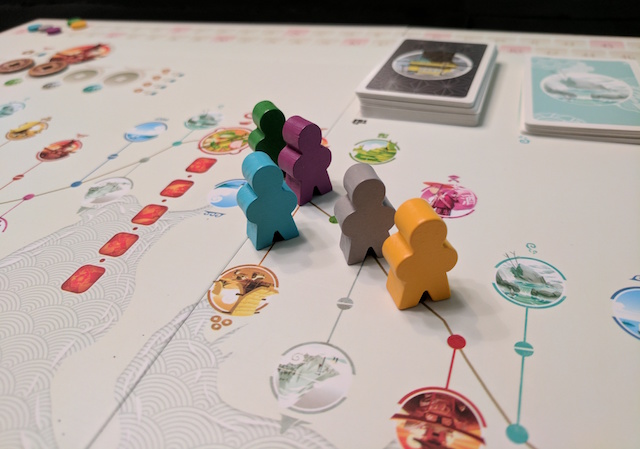 Our travels end with Tokaido, a wonderful game of set collection highlighted by its beautiful, minimalist board and artwork. Set in Japan on the road connecting Edo to Kyoto, Tokaido is a relaxing stroll in gaming, as players move along and collect gifts, donate to temples, encounter friendly strangers, paint landscapes, rest in hot springs, and partake of delicious meals at several inns.

No dice are involved in movement; whoever’s in last moves first. To win, the player who’s collected the highest-scoring sets of items will be declared the victor. Of course, just like in real life, it’s all about the journey and not just the inevitable end result.

What games have allowed you to travel via your tabletop? Tell us in the comments!