Arcane Scrollworks Returns To Take Spell Scrolls To The Next Level

Each week here at Geek & Sundry we’re taking a look at new and upcoming exciting titles on Kickstarter! This week’s Kickstarter of the week is  Arcane Scrollworks 2: Second Level Spell Scrolls, an art Kickstarter featuring beautiful prop scrolls of common D&D spells. The Kickstarter has exceeded their $10,000 funding goal as of this writing and is currently at $28K.

Kickstarter has been an amazing platform for game designers. It allows direct connections with fans, provides a chance to experiment with designs with minimal risk and filled in the space between corporate board game giants and mom-and-pop game companies with a robust middle. One often overlooked area of Kickstarter are game accessories. Custom dice, upgrades pieces and gaming gadgets have all taken a slice of the big juicy money pie. Even fine art has made a splash, though sometimes it takes unusual forms. Skeleton Key Games made a splash late last year with a Kickstarter featuring prop-quality scrolls depicting fan favorite first level spells from Dungeons & Dragons. The company has returned to Kickstarter to fund a set of second level spells…and more.

“Before I launched Arcane Scrollworks: First Level Spells I really had no idea what to expect,” said Ed Bourelle of Skeleton Key Games, “I knew we were about to do something unique but had no idea if it would catch on or not. The reaction from gamers was incredibly positive and we funded our Kickstarter and unlocked our first stretch-scroll on day one of the campaign. I was thrilled by the enthusiasm people were showing and sharing with their friends and social groups. As an independent publisher and the sole creator of these scrolls, it was incredibly humbling to see the excitement around them. And once people started getting the final scrolls in their hands and sharing their photos and reactions it was clear we had a hit.”

This Kickstarter began offering 8 spells to create: burning hands, spider climb, mirror image, crown of madness, scorching ray, arcane lock, web and invisibility. It has already unlocked a few stretch scrolls such as misty step and is hoping to expand into other spell lists by the end. “I would love to cover more spell types and levels,” said Bourelle. “As it stands, the current Kickstarter has an add-on containing three iconic cleric spells. I have a similar set for Druids that will make an appearance toward the end of the campaign. Beyond that, I’m open to all options.” 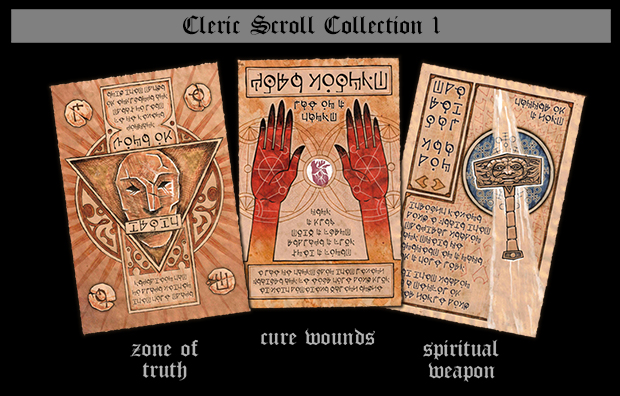 The Kickstarter ends on May 31st. One spell scroll costs $12, with the better deal being buying in bulk. The whole set, including stretch scrolls, costs $89. These pieces can be used as props for a LARP and loot for a tabletop game, but the creator suggests a few other ways to use his work.

“I definitely wanted to bring something new to the second campaign,” said Bourelle. “There are a number of thematic connections in the second level spell list so I decided to design pairs of scrolls that create diptychs when placed side-by-side. Web and Spider Climb were a natural fit as were Flaming Sphere and Scorching Ray. These scroll pairs look great when displayed together but could also be used by an imaginative game master to form a multi-part quest where the combining the scrolls has some cool story driven purpose.”

What is your favorite second level spell? Tell us about it in the comments!