Each week here at Geek & Sundry we’re taking a look at new and upcoming exciting titles on Kickstarter! This week’s Kickstarter of the week is Arcane Scrollworks: First Level Spell Scrolls, perfect for D&D enthusists who want incredible, immersive props. As of this writing the Kickstarter has exceeded their $1K funding goal and is at over $11.5K.  If you want to stay tuned into what’s going on in the world of tabletop, be sure to tune in every Wednesday starting at 4PM PT on Twitch and Alpha.

Magic-users love spell scrolls. It’s a standout piece of loot in Dungeons & Dragons because scrolls are best used by wizards, clerics and other spellcasters. There are obvious reasons, of course, because they offer an extra use of a spell without a spell slot. They also can offer a sample of a spell beyond the current caster level like a free demo of new, sweet software. SkeletonKey Games wants to make discovering these scrolls even more memorable by offering actual spell scrolls as part of their Arcane Scrollworks Kickstarter.

“I based the first few selections on spells that my players frequently use in our games,” said Ed Bourelle of SkeletonKey Games.” When I decided I wanted to take the project to Kickstarter I flushed it out by trying to find a balance different schools of magic, utility spells, and offensive/defensive spells. I also factored in the fact that I had to come up with something visually interesting to get represent the spell itself.”

The Kickstarter offers interpretations of several classic 1st-level spells including burning hands, detect magic, disguise self, find familiar, hideous laughter, mage armor, ray of sickness and sleep. Stretch goals have already unlocked magic missile, color spray and a third spell to be determined with backer input. The scrolls will be printed on acid-free stock and weathered by the artist. Hand-cut stamps and acrylic paint will be used to finish each scroll using archival quality materials. Each scroll is roughly 7″ by 11″, though sizes vary by scroll. 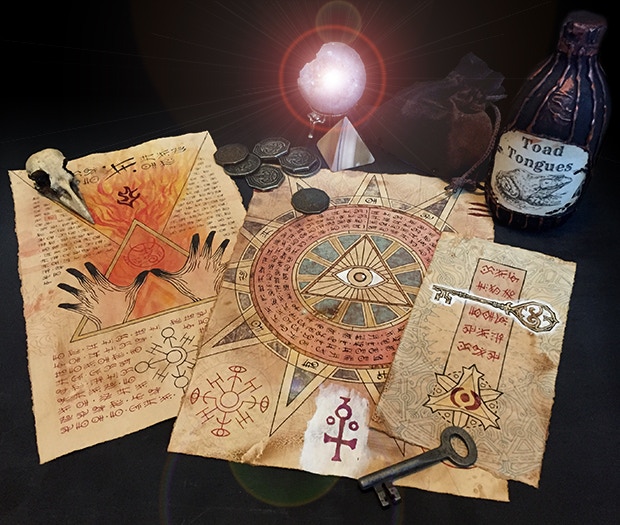 Each scroll looks like a document ripped from the pages of an eldritch tome. Bourelle spent a lot of time researching occult art practices and using some of the same techniques used to illustrate old manuscripts.
“The true occult feel of the Detect Magic has really been popular,” said Bourelle. ” [I’m] not sure I have a favorite. Possibly Burning Hands but that might just be because it was the first one I did.”

These spells are usable as game props, LARP props but are also suitable for framing. A single scroll is $12 plus shipping but the more a backer orders the cheaper the per scroll cost gets. As of this writing, all 11 scrolls are included in a $89 package, which puts the scrolls at just over $8 a piece. A $109 package includes copies of a Scroll of Eldritch Convocation with a numbered certificate from an earlier Kickstarter. This Kickstarter ends on December 7th, so time is of the essence for anyone who wants to add these scrolls to their arcane library.