James Wan’s Aquaman is full of references to the character’s nearly 80 year history in the comics, from the more serious ’90s version of the character, to the frivolous aspects of the Silver Age stories of the ’50s and ’60s. One of the more off-the-wall aspects of Aquaman comics from the past made a cameo in the film. It was brief, but you’ll definitely remember it. As the gladiatorial fight between Arthur Curry ( Jason Momoa) and his half-brother Orm ( Patrick Wilson) is about to begin, we hear the beating war drums, and then see that it’s being played by a giant purple octopus.That octopus is Topo. 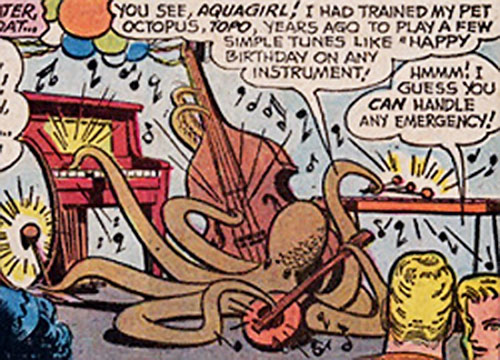 Topo has a long history in the pages of DC Comics. He first appeared in the days of the Silver Age, back when Aquaman was finally becoming an A-lister thanks to his exposure as a member of the Justice League of America. This Topo, in 1956’sÂ Adventure Comics #229, was portrayed as a hyper intelligent octopus. He was the first of Aquaman’s many animal sidekicks.

Topo was smart, and he helped Aquaman fight his foes. He had amazing dexterity–so much so that he could actually use a bow and arrow, or throw objects at anyone messing with his favorite underwater superhero. But more often than not, Topo babysat Aquaman and Mera’s infant son Arthur Jr., a.k.a. Aquababy. But in one issue, Topo played several musical instruments at once. It’s clearly the moment that inspired his cameo in the film (and probably inspired that one octopus in The Little Mermaid, too).The octopus took a break from the pages of DC Comics for a long time, as he was replaced by other Aqua-pets, like Tusky the Walrus. But as the modern age of comics dawned, we got a new, very different version of the erstwhile octopus. Aquaman encountered Topo while protecting a submerged part of San Diego. This Topo, a hybrid of a cuttlefish and a squid, had a humanoid body. 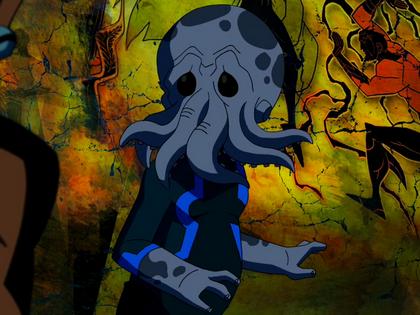 This take on Topo was introduced in 2007’sÂ Aquaman: Sword of Atlantis #50, during the time when the Aquaman we know and love was thought to be dead. The octopus had the ability to shoot ink from under his face tentacles, creating a smokescreen for Aquaman in battle. This rendition of Topo was sadly short-lived, but he did make an appearance on the animated Young Justice series. 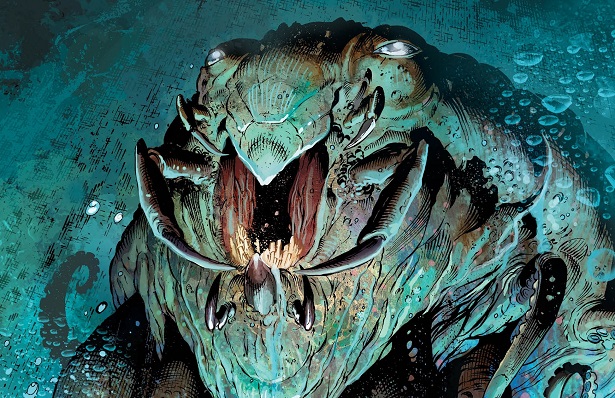 Flash forward to the New 52 era of Aquaman. The movie draws heavily from this period. And it happens to introduce a third interpretation of Topo in 2013’sÂ Aquaman #19. Topo became a huge sea monster, part octopus and part crab creature. Only Aquaman could summon Topo, using a mystical Atlantean conch. Aquaman called Topo forth in the comics to help him defeat the villain known as Scavenger; he used his full telepathic powers to convince Topo to attack Scavenger’s fleet.That didn’t work out well for Aquaman, but one thing’s for sure: Topo has come a long way from being a silly pet to being a force to be reckoned with. Still, we’re all partial to the silly drum playing version, so we’re glad he’s the one who made it into the movie.