After a two-year hiatus, Altered Carbon is finally returning for a second season. And before Anthony Mackie suits up in Disney+’s The Falcon and the Winter Soldier, he’ll bring his superhero fighting skills to the sci-fi world, leading the cast of Netflix’s inventive, cyberpunk series.

Based on the novels by Richard K. Morgan, Altered Carbon depicts a future set in 2384, where humans are able to transmit their consciousness to new bodies (or “sleeves.”) The series follows the life of Takeshi Kovacs (played by both Will Yun Lee and Joel Kinnaman in the first season) as he travels through time and space in search of his long-lost love, the revolutionary leader Quellcrist Falconer (Hamilton‘s Renee Elise Goldberry). Mackie takes over the role of Kovacs in season two and a new trailer teases some of the plot we can expect to see, along with a first look at the character in action.

The season itself picks up 30 years after the events of season one, with Kovacs still haunted by his past—”this is a ghost story”an opening voiceover teases, before giving us our first look at Mackie’s Kovacs, which finds the character sporting a few epic upgrades in his new sleeve including rapid healing, advanced reaction time, and telekinesis. Despite the time jump, some things haven’t changed: Kovacs is still searching for Quell. His journey takes him back to his home world, but finding Quell alive after all this time may be the least of the reformed mercenary’s troubles. After all, if you search too long for a ghost, who knows what you’ll find? 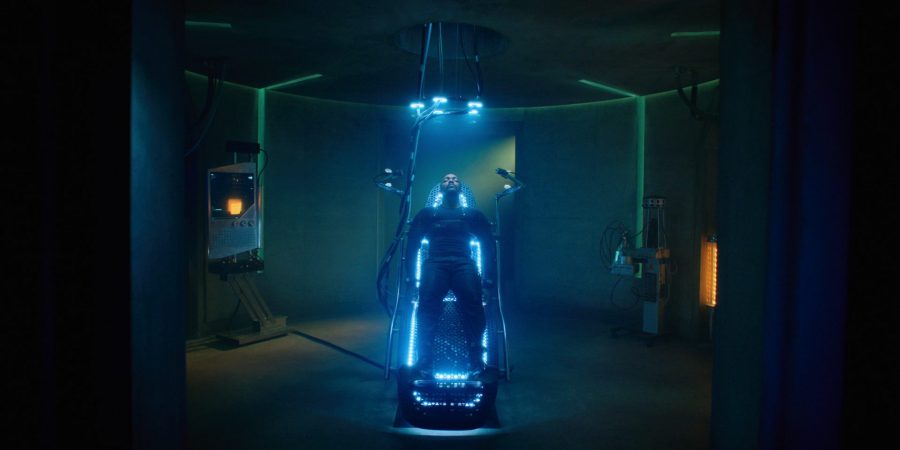 A former flame isn’t the only thing Kovacs will contend with in this season, though. According to the official synopsis from Netflix, “after decades of planet-hopping and searching the galaxy, Kovacs is recruited back to his home planet of Harlan’s World with the promise of finding Quell. Haunted by his past and responsible for investigating a series of brutal murders, Kovacs is stunned to discover his new mission to solve the crime and his pursuit to find Quell are one and the same. With the help of his loyal A.I. Poe (Chris Conner), Kovacs must now partner with new allies to outwit his enemies and find the truth: Who is Quellcrist Falconer?”

Thanks to Marvel, we already know that Mackie has all the makings of an action star, so seeing him take on new challenges in this cyberpunk world is a fun treat. And it’s exciting that we’re going to see more of Quell, who invented the technology used to create everlasting life. While fan favorites Goldberry and Conner are returning alongside Mackie, a number of new faces are joining the cast including Simone Missick (Luke Cage), Lela Loren (Power), Dina Shihabi (Jack Ryan), and Torben Liebrecht (Homeland).