ANTEBELLUM Is A Perplexing Film About the Horrors of Racism - Nerdist

ANTEBELLUM Is A Perplexing Film About the Horrors of Racism

A few months ago, Antebellum caused a social media stir for several reasons. The film’s initial promotional materials included the tagline “from the producers of Get Out and Us”–two thought-provoking and masterful Black horror films. Antebellum is also led by music superstar Janelle Monae, who gave a powerful performance in 2016’s Hidden Figures. Lastly, an intriguing albeit puzzling trailer teased a story about a modern-day woman who would somehow end up in the slavery era and fight to free herself and others. All the pieces seemed to be present for a horror hit. But Antebellum’s concept and characters are not solid enough to hit the mark.

The film introduces Eden (Janelle Monae), an enslaved woman dealing with the aftermath of a failed escape. She, along with several comrades, receive various levels of gratuitous violence for punishments. A few small symbols and signs raise questions about the character’s origins but Antebellum doesn’t build on that intrigue. It would have been beneficial to see actual relationships building between Eden and those around her, particularly Eli (Tongayi Chirisa). 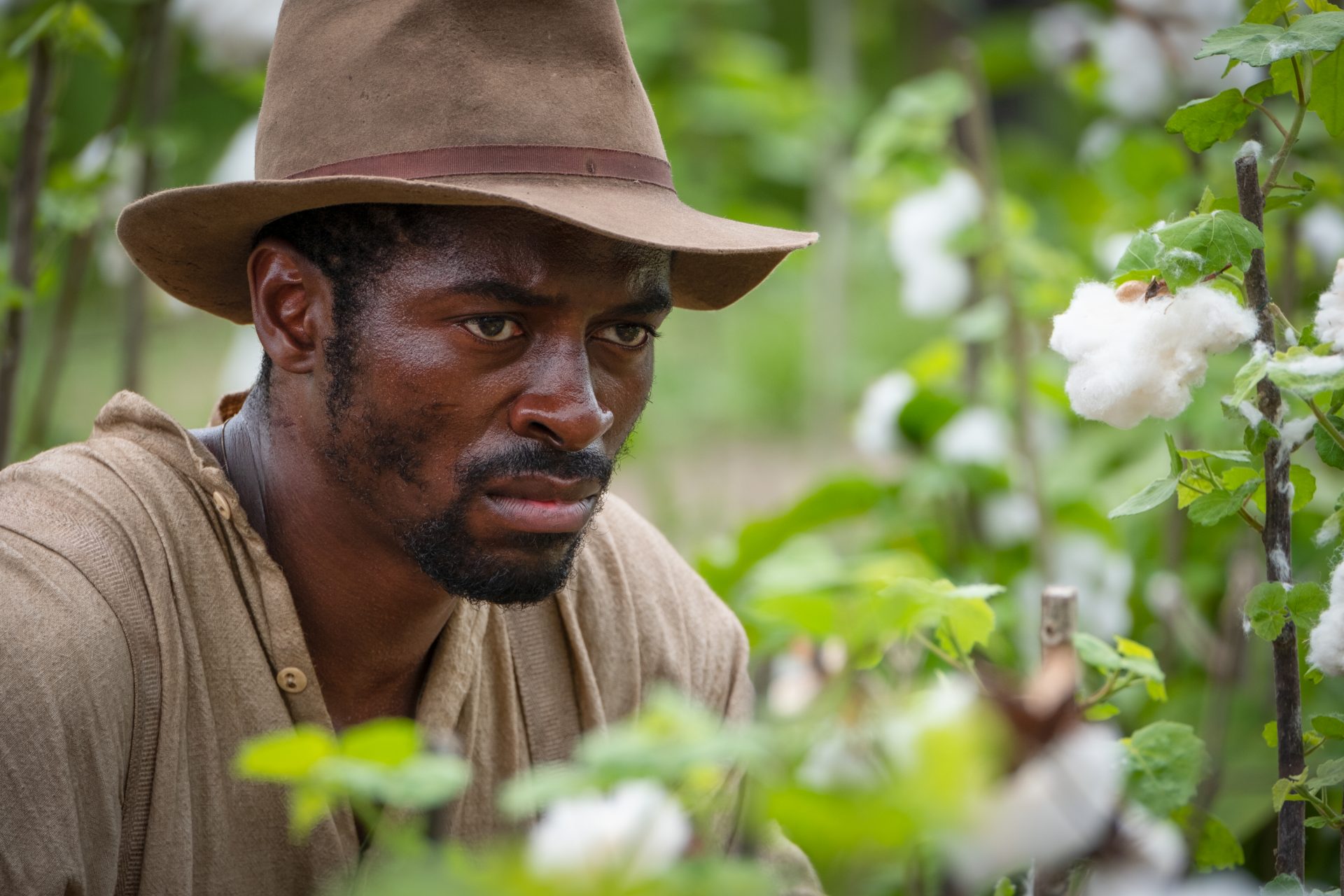 He is her closest confidante, but there’s nothing–not even expositional dialogue–to provide context to their relationship. Instead, the next 40+ minutes of the film shows them speaking in vague circles about a nebulous plan. There are a few scenes of trauma sprinkled in that really don’t serve a purpose nor have a payoff in terms of the moving the story forward. There’s one character who is beaten and then dies by suicide. Why? To “motivate” Eden and Eli to take further action–which they were going to do anyway.

Antebellum then abruptly brings the viewer into Veronica Henley’s (Janelle Monae) life. The framework is there for Veronica to be a solid protagonist, but the film waits entirely too long to bring her into the fold. She’s a present-day PhD sociologist and author whose work examines the socioeconomic disparities for Black Americans. The plot rushes to establish her life with a few shots of her degrees on the wall, a video of her challenging a white man on TV, and a brief interaction with her husband and daughter. This is all we get of her life before she sets off on an ill-fated trip out of town. 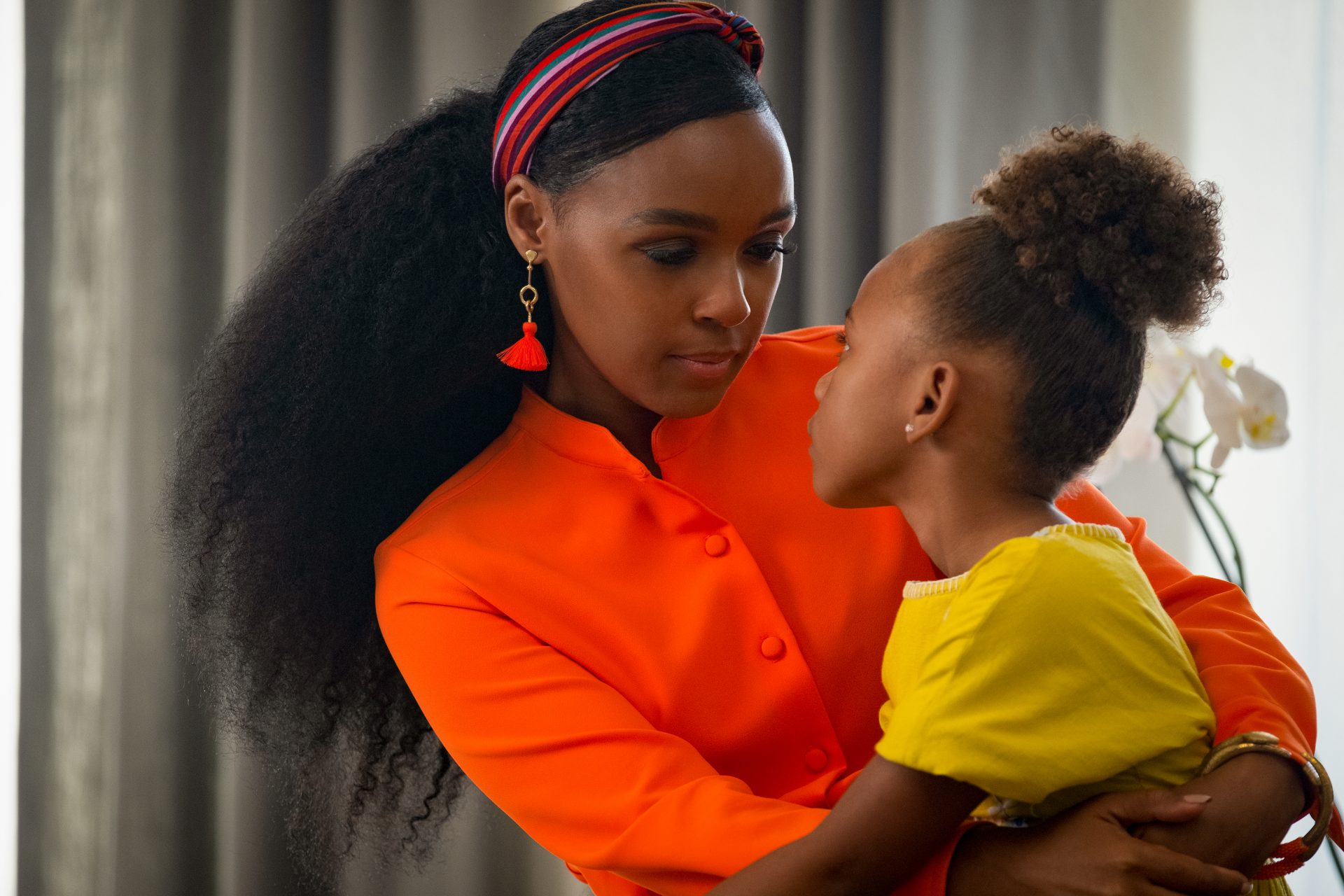 Her family is nothing more than empty markers to show that she’s a “modern woman with the entire package.” Their presence adds nothing to the narrative nor makes the viewer feel a deeper connection with Veronica. This goes doubly for her friends Sarah (Lily Cowles) and Dawn (Gabourey Sidibe), whom she spends time with at her hotel and a nearby restaurant.

Veronica and Sarah have an odd yet brief discussion about exorcising the unconscious past for no reason than imply that some Kindred–esque action is about to go down. A few strange moments make you sit up and brace for intensity–but nothing happens at all. There is no shifting between time nor smooth juxtapositions between what is happening with Veronica and Eden. This makes both stories feel oddly disconnected when there’s clearly a connection between them.

Antebellum instead veers into surface level conversations about work-life balance and advice on approaching a woman. It all feels like unnecessary padding when the real story is RIGHT THERE. The film’s antagonist Elizabeth (Jena Malone) is a formidable and realistic evil. She’s an unsettling white woman who uses her privilege to infiltrate places to carry out her schemes. But, like everyone else in the film, she’s given very little development and time to shine. 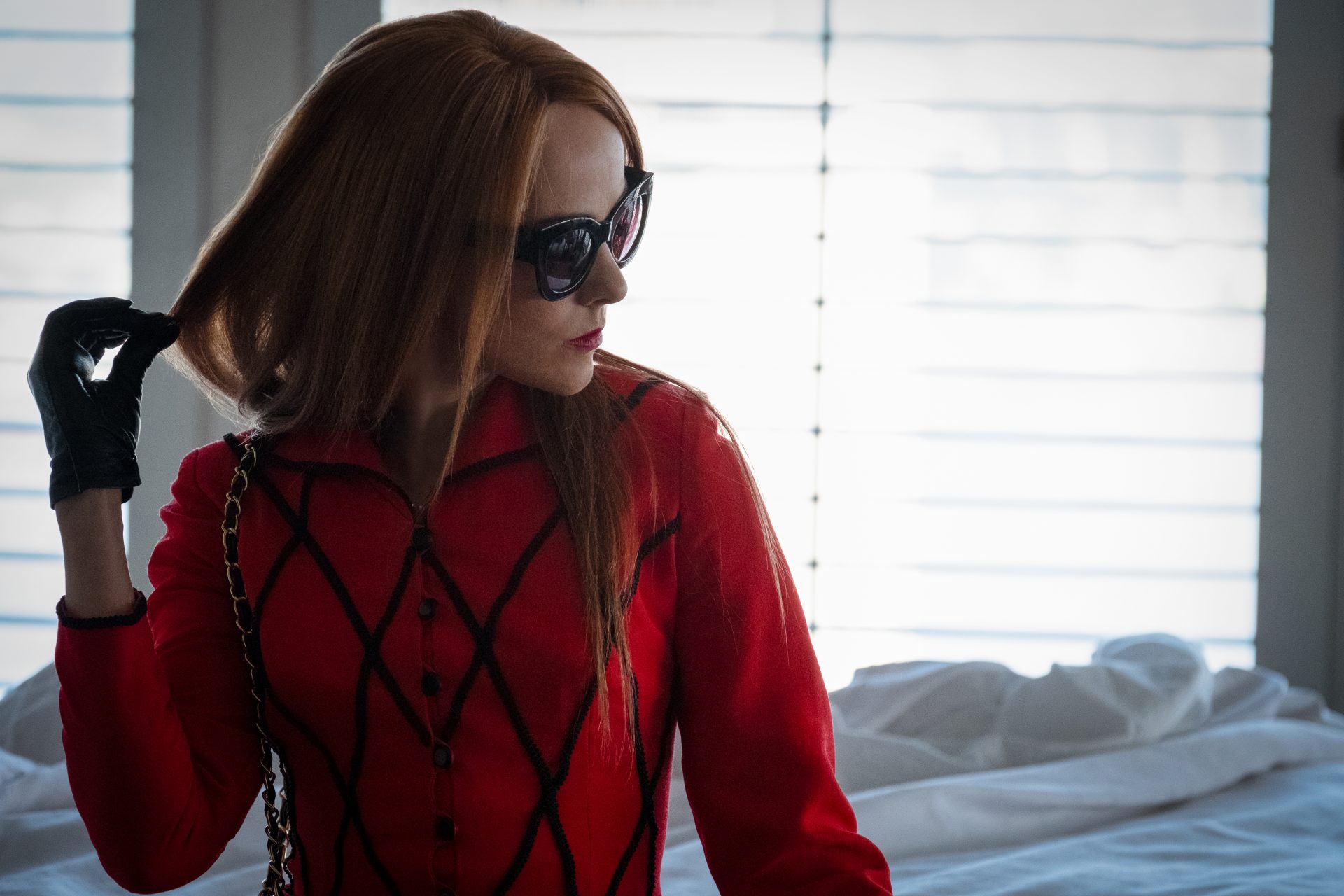 There’s no real tension and very little interaction between Veronica and Elizabeth. The latter pops up a few times to be creepy but never gets a chance to flex her villainess muscle. Yet, viewers are supposed to be somehow invested in their big hero-villain moment. The film’s other villains do little to nothing to provide structure for this evil collective.

One of them is barely seen nor heard while the other’s domineering presence is borderline cartoonish at time. You keep waiting for the story to really get started and for connections to align. None of this happens until the last 20 minutes of the movie. Even then, you’re still wondering if any of it makes any sense.

Veronica’s kidnapping is the best few minutes of the film. Black women and girls often go missing without as much media attention and rescue efforts as their white counterparts. However, Veronica is a well-known figure so it’s a bold move to snatch her so publicly. Monae plays the moment so well as she realizes the imminent danger and fights to get someone’s attention for help.

The connection between Veronica and Eden is anticlimactic at best as is the final fight and escape scenes. Again, a lot of what transpired would have packed a larger punch with a lot more character and world-building. The final moments are melodramatic, pseudo-woke, and quite frankly perplexing and disappointing once you figure out the truth behind the plantation. 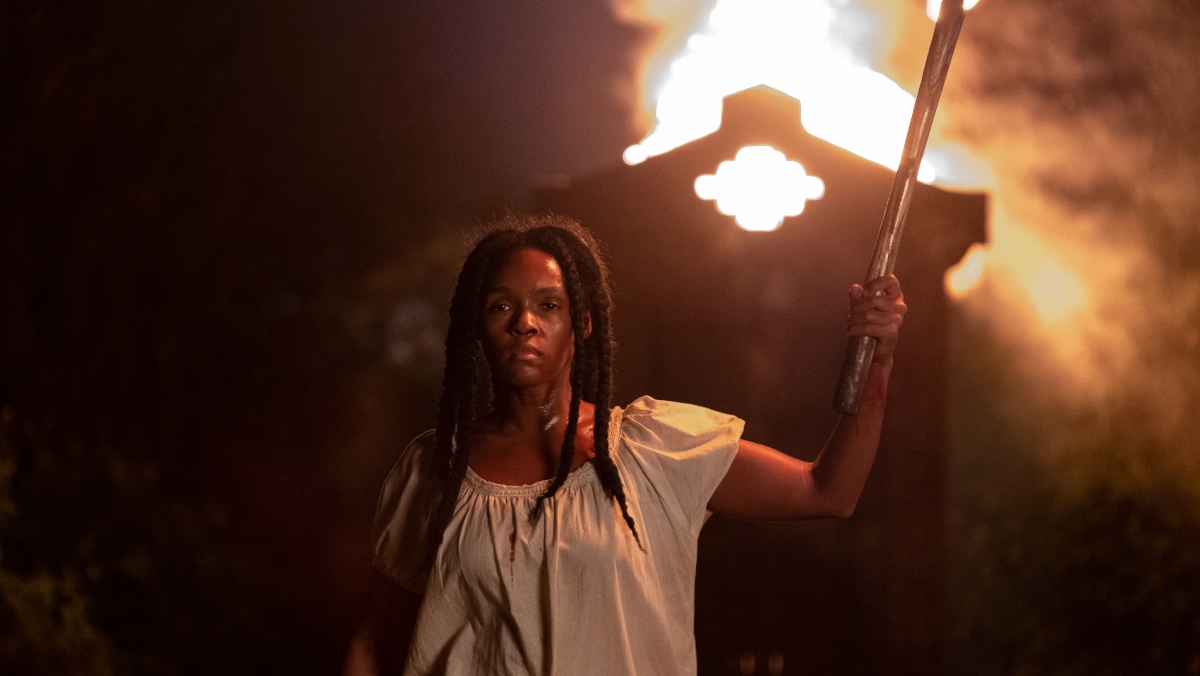 It’s meant to be a clever plot twist but it feels more like a frustrating bait-and-switch with no substantial horror element, psychological thrills, nor a revolutionary story that feels like a hero’s journey for Veronica. The setup for a mind bending mystery never materializes and the plot becomes a muddled mess. Veronica exacts revenge against a few deserving people. But it feels significantly less satisfying because there is no buildup to this climax. Any viewer who’s a decent person will obviously want her to escape this plight, but it’s only because this is a generally nightmarish situation.

It’s also a story that needs the input and guidance of a Black woman writer. (The film was written and directed by Gerard Bush and Christopher Renz.) The Black women characters needs a lot more nuance, complexity, and depth. A Black woman writer would be able to dig deep into the soul of these women, how physical/sexual violence affects them, and the multitude of reasons behind their actions. There’s something that feels “off” about the way Veronica interacts with her girlfriends in the film. They seem to interact the way that men think they would talk instead of a natural conversational cadence. 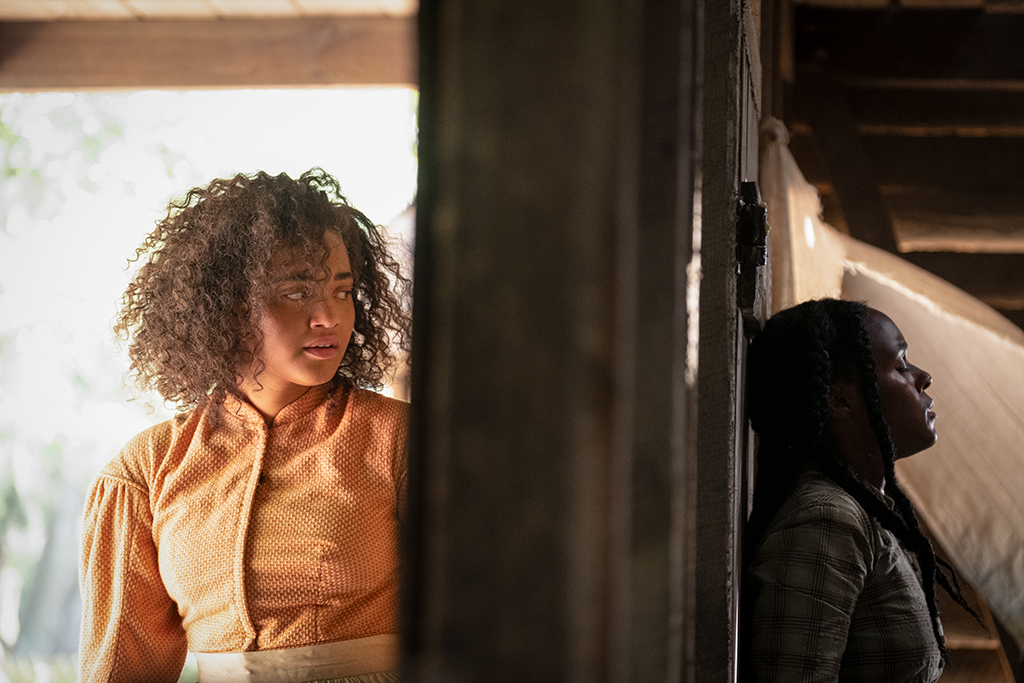 Perhaps a different storytelling format could have mitigated the disjointedness and rushed storyline. Maybe an Antebellum mini-series could have taken more time to give Veronica/Eden a foundation, provide more in-depth details about the film’s barely-established antagonists’ motivations, and gone into how and why any of this even happened. There are the obvious answers (hello racism) to why anyone would do this. However, there needs to be a deeper dig into systems in place to facilitate this heinous operation.

It’s sadly not something that seems too far-fetched in today’s society, but it’s not an alternate reality that Black people (or anyone for that matter) need to see or even wonder about right now. There’s no deeper commentary to discuss nor bigger message about society wrapped up in this story. And, anyone who pays a minutia of attention in the film can easily ascertain the “when.” The “why” and “how” is what will keep them hanging on for threads. The film never addresses those questions. And, without a solid story foundation for its general concept, Antebellum leaves one massive question at the end: What did I just watch?