9 of the Best ANIMANIACS Episodes to Rewatch - Nerdist

9 of the Best ANIMANIACS Episodes to Rewatch

From a nostalgia for the merry mayhem of cartoons past and a prescience concerning the pop culture-skewering tradition that’d overtake those yet to be, we got Animaniacs: a melding of two eras in small screen animation, but something entirely one-of-a-kind. With the news that Animaniacs will be finding new life on Hulu, we couldn’t help but wonder just how well a series that seemed so specific to its time—one that seems to have served as a bridge between the before and after—could function in a landscape like today’s.

Looking back at old episodes of the series, we’re still not quite sure. Animaniacs represented what might now be seen as a long-abandoned allegiance to the zaniness and violence of Looney Tunes and the like, all the while cornering the market on the hippest exploits in pop culture evisceration. If a new series really wants to get the old Animaniacs vibe down pat, these are tricks it’ll have to master.While Animaniacs‘ run was filled with gems, we picked out nine of the best examples of that old magic that made the show such a stunning recipe of old and new styles of comedy. Here are our favorites! After his ailing secretary goes home for the day, Warner Bros. CEO Thaddeus Plotz finds himself with no other recourse but to hire Yakko, Wakko, and Dot in her stead. What ensues: gameful misunderstanding of corporate lingo, a play at Liberace’s typewriter bit, and complete destruction of the office when the siblings fight over who gets to answer Plotz’s phone.

Though maybe not the funniest or most innovative short in the series, “Temporary Insanity” is above all else the archetypal Animaniacs episode, mining comedy from the conflict inherent in the Warner siblings’ union with high society. If it is Animaniacs’ M.O. to punch up, then Hollywood’s corporate culture presents no more appropriate target; “Temporary Insanity” drums up wordplay, slapstick, and sociopolitical satire in the process.

“Pigeon on the Roof” 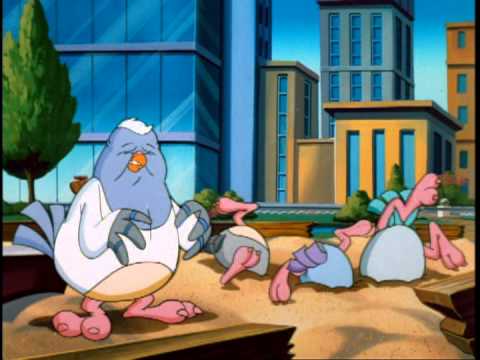 As a general rule, Animaniacs used its Goodfeathers segments to pay homage to classic New York movies, with Goodfellas, The Godfather, Raging Bull, and West Side Story all present and accounted for. Occasionally, they’d toss an outlier like Rocky into the mix, though this episode’s Russia-set namesake marked the series’ most vivid break from routine.

Though its appropriation of Fiddler on the Roof is loose and meandering—so much so that the episode’s tag sees Pesto lamenting the nonsensical nature of the story he’s just lived through—its song parodies (“Tradition” begets “Scorsese,” “Matchmaker” begets “Egg-hatcher,” and “The Dream” begets one of the strangest scenes in Animaniacs history) are worth the price of admission. Plus, it’s got all the hallmarks of any good Goodfeathers outing: physical turmoil, petty squabbles, and malapropisms that’d make Tony Soprano blush. Slappy Squirrel’s curmudgeonly panache followed her through adventures in Woodstock, the awards circuit, and the realm of Disney animation, but she was never funnier than when facing off with Animaniacs thinly veiled Siskel and Ebert send-ups, Hiskel and Egbert. Like the best of Animaniacs, the episode managed to have equal fun with older-skewing material—namely, the culture and idiosyncrasies of popularized film criticism—as well as younger, which came in the form of Slappy dealing the guest stars a series of Bugs Bunny-esque wallops in return for sour reviews. Even when Slappy segments were aiming low, they were always escalated by the strength of character in their eponymous heroine. Despite being a vehicle for simple hijinks, she packed a self-aware melancholy that made her far more interesting than the average children’s cartoon character. Though ostensibly more plot-oriented than your average Warners sketch  (this one sees the siblings playing detective to find the missing diamond of cruise passenger Marita Hippo), “Hercule Yakko” is actually a pretty flimsy ordeal. But the fast-paced, joke-a-minute nature of this particular sketch has kept it close to my heart since younger viewings. Sometimes, a cartoon is served less by brilliance than it is by a running gag of people screaming bloody murder in one another’s faces. While pop culture referencing was only a piece of the Animaniacs puzzle, its dexterity for the craft was brought to a level beyond mastery in this vignette: essentially a long, hilarious one-note joke in which classic and contemporary movie titles are mined for puns and sight gags. While there’s little else to say about this tour de force in wordplay, there’s much laughter to be derived from it.

“The World Can Wait” Limiting myself to only one Pinky and the Brain segment, I’m inclined to choose an outlier of the form. “The World Can Wait” sees the Brain abandoning his usual drive to conquer the planet Earth, instead devoting his attention to winning the heart of laboratory newcomer: a dopey female mouse named Billie. Through Brain may have his eyes on a more intimate target than usual, that doesn’t stop him from employing his usual brand of ill-conceived overreach to claim victory. The usual wackiness notwithstanding, “The World Can Wait” is not slight on what makes Pinky and the Brain the best of Animaniacs’ supplemental cartoons: genuine heart. 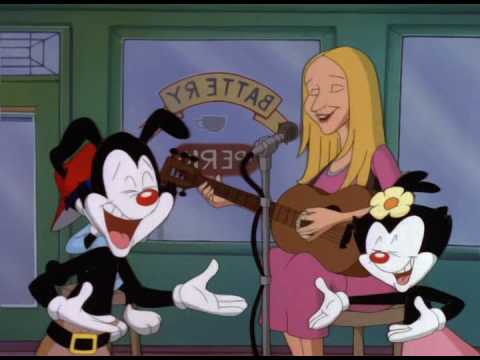 Though the aforementioned shorts aired two years apart, I cannot help but think of them company with one another. Animaniacs was never very particular with its lampoonery, having equally as much fun at the expense of Charlton Heston and Barney the Dinosaur. But nothing exemplifies this versatility better than this coupling of episodes: one a send-up of Mighty Morphin’ Power Rangers, the other of Friends. Each is undoubtedly funny, and, more impressive for a children’s cartoon, pointed in its mockery of the material in question. 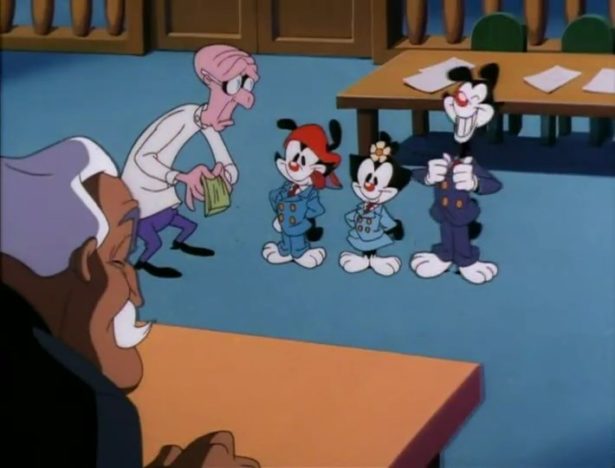 Though hailing from the thick of Animaniacs’ earlier and more childish period, “La La Law” shows early signs that the series was growing ever the more mature in its comedic sensibilities. When the Warner siblings sub in as psychiatrist Dr. Scratchansniff’s legal council to free him of a wrongfully assigned parking ticket, what could have been a straightforward trial gives way to mayhem, merriment, and a remarkable supply of genuinely clever puns. “La La Law” may in fact be the perfect Animaniacs short; the premise and its carryout reap the benefits of a young viewer’s innate irreverence for courtroom decorum, and all without neglecting the merits of sharp, sophisticated joke-writing.

But what makes “La La Law” an especial favorite of mine is that, unlike some Warners antics, its chaos is born from a good place. Yes, the Warners relished in wreaking havoc through Burbank municipal court, but they also aimed to get their friend out of a jam he didn’t deserve to be in. Even their adversaries in the episode, the judge and meter maid, wound up the better for having crossed paths with the Warners. If any episode is an articulation of what Animaniacs is really about, it’s this one: not aimless destruction, but destruction of that which needs to be destroyed.

Let us know what you think of our list, and chime in with your own favorite Animaniacs episodes!