Amon & The Equalists Have Invaded IDW's 'The Legend of Korra: Pro-bending Arena' - Nerdist

Amon & The Equalists Have Invaded IDW’s ‘The Legend of Korra: Pro-bending Arena’

In case you’ve been hiding out in the swamp with Toph and don’t know, IDW is currently Kickstarting an immersive miniatures board game set in the Avatar universe, The Legend of Korra: Pro-bending Arena. We excitedly talked about it when the game was first announced and since its launch on Kickstarter last week (and fully funding as fast as Pabu can eat himself sick), we’ve been on the edge of our seats with their daily updates, watching as IDW adds more and more to the base pledge box. It’s basically 15 days of Korra goodness packed into a single Kickstarter campaign. 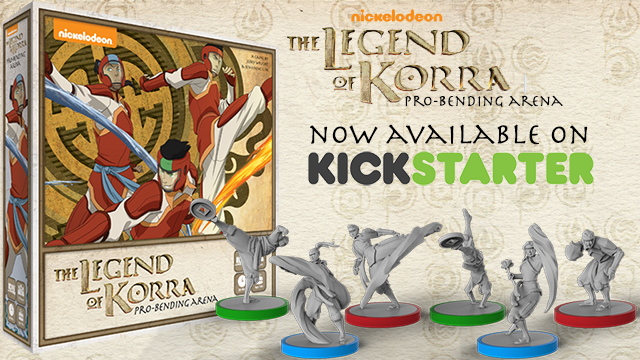 The game is set in Book 1 of Legend of Korra. It is a strategic sports game, where two players face off in head-to-head matches that capture the action and excitement of pro-bending from the show. Talking with the designers, Jessey Wright and Sen-Foong Lim, we got some insight about how they translated the sport of pro-bending from the screen to the tabletop. “We worked very hard to make sure the mechanics of the game create the intense back and forth,” Jessey told us. “I think we met that challenge, and have designed a game that will make players really feel like pro benders.”

Sen went on to expand on the idea of immersing players into the universe in which the game is set. “I am a firm believer that tabletop games are a curated experience so I want to help people relive the feelings they had while watching the cartoons that they loved. “ 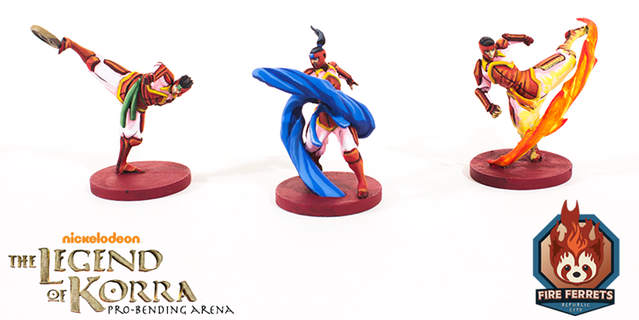 Not everyone can be the Fire Ferrets though, and the game is populated by other teams. As of this writing, the Wolfbats, Rabaroos and Boar-Q-Pines have been announced as playable bending teams. While we didn’t get to know them as well in the show (other than the arrogant, antagonistic, Wolfbats). 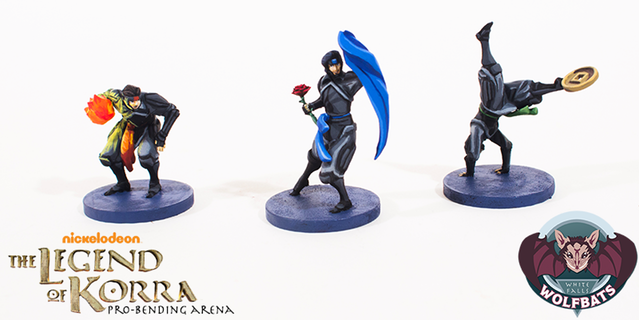 Sen made it clear that the teams have their own feel and personality on the table. “The Boar-Q-Pines are a very offensively-minded team vs. the Rabaroos who focus on character interplay, with one move triggering another.  Each team has its own definable style of play.”

Jessey added, “Rabaroos, for instance, move around more than other teams, and their unique mechanic lets them deliver a rapid series of attacks. For the individual characters, we set out to make sure every character was mechanically unique (there is no duplication of abilities in the game), and that goal ensured that we made each character (on an individual level) have their own bending personality and style. This also supports the Fantasy Team rules, which let players mix and match characters from different teams.” Yes, you read that right: fantasy team pro-bending is a thing.

Today’s release announcement is a particularly exciting one. Just as the pro-bending arena was invaded by Amon and the Equalists in the show, the game too has been invaded by Equalists in today’s announced expansion.

Sen describes the new expansion. “As with many stories we love, it’s often a strong villain that adds that extra something to a story.  The Legend of Korra is no exception to this rule.  Amon was easier to incorporate due to his role, along with the Equalist forces, in sabotaging the Pro-Bending Arena.  We have some very interesting mechanisms in store for the players with them.  Not only can you play as Amon and 2 Chi Blockers against a team of 3 benders, but two players can join forces against Amon and 4 Chi Blockers! While neither Amon nor the Chi Blockers bend elements, their mix of martial arts, hi-tech weaponry, and Chi blocking skills will test the mettle of the most seasoned veterans of the arena. “

With Amon and his equalists in the mix, we can already hear the pro-bending arena’s announcer guy build tension with his questions: “What other exciting announcements will we be seeing?  Will we get expansions to help combat these Equalists? How many more Korra villains will we be able to play?”

The best way to stay in the loop is to check out The Legend Of Korra: Pro-bending Arena Kickstarter and follow IDW Games’ Facebook Page for updates.

Image Credits: Nickelodeon/IDW Games
This is a sponsored post.