We’re only two episodes into  American Horror Story: Apocalypse, and already it’s proving to be as crazy and campy as all previous seasons combined. And just like the earlier seasons of the Ryan Murphy series, this year is replete with various pop culture references and homages to other movies and shows. Here are seven influences from film and television that you might not have noticed in this story of the nuclear holocaust survivors of the mysterious Outpost 3. 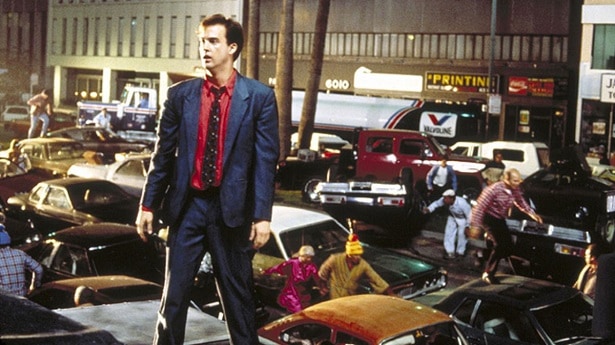 This 1988 cult film is all about a young couple, played by Anthony Edwards and future AHS guest star Mare Winningham, who find romance on the eve of a nuclear holocaust. Set in Los Angeles, there are several scenes of people panicking about the impending nuclear attack, and also a subplot about people trying to get out of LA to a secret compound where they’ll be safe. The opening scenes of the first episode of AHS: Apocalypse, where people are freaking out in the streets of LA over their impending doom, are all straight out of Miracle Mile, as is the storyline of two young people finding love during the end of the world. 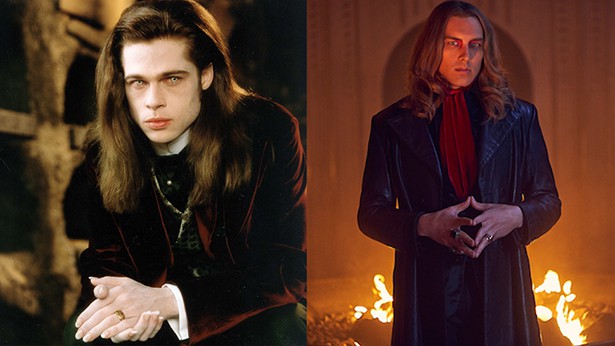 When the Antichrist Michael Langdon (Cody Fern), who is the grown-up baby from AHS: Murder House, finally makes his grand entrance at the end of episode one and steps into Outpost 3, he might look familiar. That’s because his look is totally evoking that of Brad Pitt as the vampire Louis from Interview with the Vampire, right on down to the pasty makeup. In fact, he arrives at Outpost 3 in a carriage drawn by two black horses with feathers on them piercing through the fog, mimicking another scene from that film.

Hollywood legend Joan Collins plays former movie star Evie Gallant on AHS: Apocalypse. But she might as well be playing an older version of her iconic ’80s character, the all-time greatest super diva Alexis Carrington Colby from Dynasty. In fact, When we first meet her in AHS, she’s making a snide comment to her housekeeper about her “burnt champagne.” This is direct callback to one of her most famous “diva vs. diva” scenes on Dynasty.

There’s a scene in the cult classic The Rocky Horror Picture Show where Dr. Frank N. Furter ( Tim Curry) has his house guests over for a very special dinner. It turns out the main course of said dinner is the recently murdered corpse of his former plaything, the bad boy known as Eddie (Meat Loaf). When his guests realize what they’re eating, all Frank can say is, “That’s a rather tender subject.” On AHS: Apocalypse, after one of the compound “guests” named Stu breaks the rules, he’s taken out back and shot. Then an unusual dinner is served, and it turns out, as someone later screams, “the Stew is Stu!”

Although Evan Peters has starred in every season of American Horror Story so far, he’s also part of another famous franchise, as he’s played mutant speedster Quicksilver in two X-Men movies. His most famous scene was in X-Men: Days of Future Past, where we see how Quicksilver views the world while moving at super speed, set to the classic Jim Croce song “Time in a Bottle.” There is a scene in episode two of AHS: Apocalypse that finds Peters’ character of brooding in Outpost 3, while listening to the same song. That can’t be a coincidence.

Pretty much anytime the numbers “666” appear anywhere mysteriously, whether they be on a little kid’s scalp or, as in AHS: Apocalypse, on the fogged-out bathroom mirror of Outpost 3 guest Timothy Campbell (Kyle Allen), you can count that as an homage to Richard Donner’s very own Antichrist classic, The Omen. And when Timothy Campbell steps out of the shower and sees those numbers on the mirror, one just can’t help but think of evil little Damian Thorne.

At the end of AHS: Apocalypse’s second episode, Kathy Bates’ character of Outpost 3 co-headmistress Miriam Mead is shot by one of Outpost 3’s guests. As she stumbles out of the room, we see she’s not dripping blood, but some kind of white liquid, and she has gears and circuits. Yes, it appears that Kathy Bates is actually a robot. This is obviously an homage to the scene that reveals that Lt. Ash ( Ian Holm) from the crew of the Nostromo is really an android in the original Alien.

Are there any other movie or pop culture references in AHS: Apocalypse you think we missed? Be sure to chime in and let us know in the comments down below.