The Cooperative Hero Game That You Deserve (And Need To Play)

First appearing at GenCon 2011 from a brand new and tiny publisher, Sentinels of the Multiverse enticed people to play a game about superheroes that had never before appeared in any comics. Although, you wouldn’t know that from reading the cards. The game claims to use characters established by Sentinel Comics (which does not exist). And every card even has a quote from one of the comics with a reference to title and number (which also do not exist). But playing the game will make you wish they did.

Sentinels is a cooperative game in which all the players win or lose together. Each takes on the role of one of the heroes included in the game. These heroes then align themselves against one of the included Villains. And, of course, each fight is complicated by occurring in a particular Environment. Each hero, villain, and environment comes with a deck of cards for use during the game. The Villain simply plays one card each turn (in addition to whatever special powers it has) and essentially runs on a primitive AI that keeps players guessing. The environment generally shoves various catastrophes in the players’ way. And the hero decks provide everything a player needs to play the hero.

Each turn, a player plays one card, uses one power, and then draws. Next hero. The simple structure gets new players into the game quickly. Players’ cards, in turn, give them access to a wide variety of abilities. Visionary, the psychic from the future, has many cards which can rearrange hero or villain decks – bringing good cards forward for her companions and preventing bad villain cards from being played. Meanwhile, Ra is able to consistently and effectively deal out damage to villains. While sharing a common baseline in structure, each hero feels totally unique.  With ten in the box, every team of three to five will have different advantages and disadvantages. 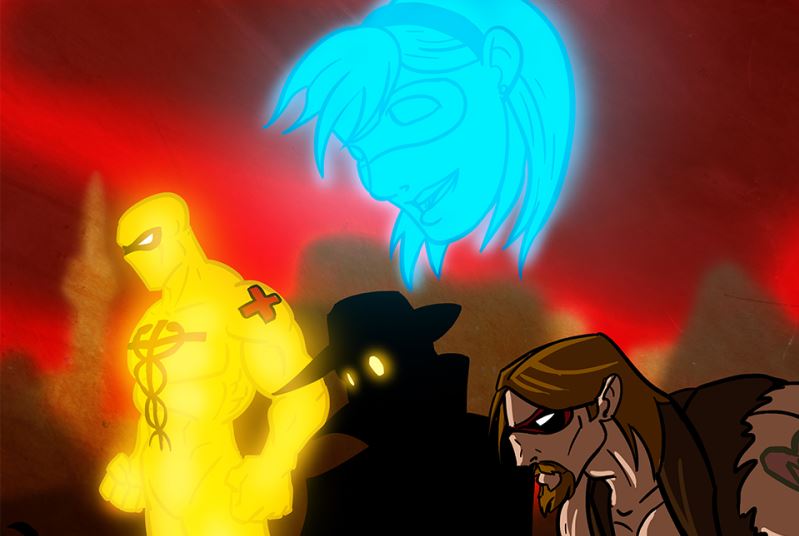 The game is amazingly fun because it is one of the few cooperative games that really fosters camaraderie and group discussions. No “alpha gamer” is directing everyone else because other players’ cards are hidden. As a result, the whole table must work together to bring the villain to heel.

The game does have modifiers where damage is increased, decreased, redirected, or changed somehow. And, some players find the bookkeeping to be distracting. But if you’ve ever played Magic: The Gathering or any CCG/LCG, you’ll be well equipped to handle it.

But the best part isn’t the mechanical differences or interactions of abilities. The best part comes from the heroes themselves. Each of their personalities shines strongly on the artwork and quotes. Tachyon, the world’s fastest woman, is a brilliant scientist but also fun loving. The Wraith uses her gadgets to fight crime. Tempest, an alien from a conquered world, is powerful but can be sullen. And, at the beginning of the series, Absolute Zero is trapped in a frozen suit and is the most reluctant of the heroes.

The villains are no slouches either. Baron Blade is a mad scientist attempting to draw the moon into the earth, while Citizen Dawn has amassed a variety of super powered individuals into the Citizens of the Sun – bent on establishing themselves as humanity’s rightful rulers. 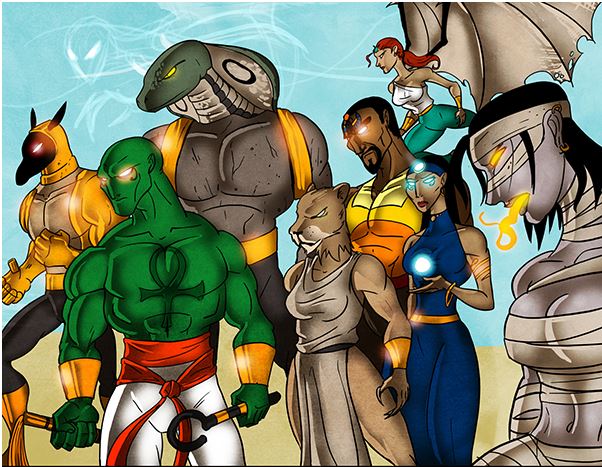 Of course, these heroes draw on common comic motifs, but the obvious inspiration melds into something original and interesting. And as you play, you can’t help but fall in love with particular characters. The narrative created with villains pummeling heroes, heroes fighting back in clever ways, and the many close calls and near defeats, puts you right into the drama of a final confrontation in a comic storyline.

And that’s ultimately what keeps me eagerly coming back. In fact, I’ve played over 115 times and am still excited for more. Each time I get to participate in a new story. Each time, I find out if our particular heroes, who have tracked the villain to his or her lair, are a match for the fiendish plans that have been laid for us.  I’ve had games where only a single hero with a single hit point finishes off the villain. And games where we would have won if only the villain hadn’t obliterated a key part of our strategy.

While the base game is enough to keep you satisfied for a good long while, Sentinels has released several expansions. More heroes to use, more villains to fight, and more environments to deal with. Mechanically, each is highly distinct – so much so that the creativity in design is impressive. The experience is so different fighting Omnitron than tackling the Ennead. Fighting Warlord Voss is not at all like defeating Kaargra Warfang. And as each expansion is revealed, the lives and personalities of the heroes and villains fills in ever greater detail. Which, of course, leads to ever better narratives in gameplay.

If you have played this awesome game, tell us your favorite hero or villain. If you haven’t, what are you waiting for?

TAGGED: sentinels of the multiverse, greater than games, Board Games