It is a truth universally acknowledged that Mr. Darcy’s status as a heartthrob will remain forever throbbing in the annals of literary fiction. In particular, it has been acknowledged by the creators of Marrying Mr. Darcy, a card game based on Jane Austen’s most famous masterpiece, Pride & Prejudice.

Written and designed by devout Austen fan Erika Svanoe, Marrying Mr. Darcy is a strategic card game, now with expansions, for two to six players. The characters are brought to life by the art of illustrator and graphic novelist Erik Evensen, whose unique style manages to convey each character’s complex personality in one single portrait.

In the game, you play as one of six female characters from Pride & Prejudice and compete to win marriage proposals from up to six of the novel’s male suitors. Each heroine has an ideal partner who earns them the maximum amount of points if she can snatch him up, and the other suitors also provide varying amounts of endgame points. For example, Elizabeth earns the most points from a marriage to Mr. Darcy, and Jane earns the most by marrying Mr. Bingley.

In order to win a suitor’s heart, players must improve their character traits according to the gentleman’s preference(s), whether it be wit, friendliness, beauty, or reputation. In this respect, it plays very much like a role-playing game set in Austen’s Regency England. Players can also add points to their cunning, which determines whom the suitors propose to first. Of course, some gentlemen may also require an enticement in the form of a dowry before they propose.

Players improve their stats by playing character cards, each with a designated value of the above traits printed on them. Event cards, played on every turn, can enable you to draw and/or play these character cards. Other possible events include scandals, surprise proposals from gentlemen, and midnight visits from grumpy old women named Lady Catherine de Bourgh. You can attend parties at Lucas Lodge and Netherfield Park, rolling the die to determine your activity or your dancing partner, and you can organize tea parties with your fellow ladies in order to swap cards as well as gossip. These event cards immerse you in the world of Pride & Prejudice, replicating events from the novel itself.

Once you’ve finished building your heroine in the courtship stage, the suitors propose in a predetermined order. If you match a suitor’s requirements, you roll the die once, and he proposes on a four, five, or six, at which point you decide whether or not to accept. Mr. Wickham, if you meet his exacting monetary standards (which aren’t that exacting), will always propose first. Marrying Mr. Wickham gives Elizabeth the least amount of points, and for the more discerning of ladies Mr. Wickham is never to be desired. However, he can pop up unexpectedly in an event card and embroil you or your relatives in scandal of the most sinister nature. You must carefully allocate character cards in order to be rid of him. 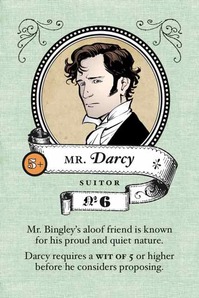 On the other hand, Mr. Darcy, if eligible, will always propose last just to heighten the anticipation. You have to reject every other man in order to have a chance with Mr. Darcy, but this may set you up for spinsterhood if he doesn’t end up proposing. If you have no proposals or reject them all, you roll the die to determine your spinster status: you can become anything from a lonely old maid to a self-sufficient authoress. If you are willing to set your sights high, it’s Darcy or bust.

One of the game’s rule variations, and the most factually titled, is “Everyone Loves Mr. Darcy,” which alters the marriage points received at the end of the game. In “Everyone Loves Mr. Darcy,” marrying Mr. Darcy gives fifteen points to any heroine, including his sister in the novel, Georgiana. For the purposes of this variation, she was adopted, ensuring that everyone can fight over tall, dark, and brooding. 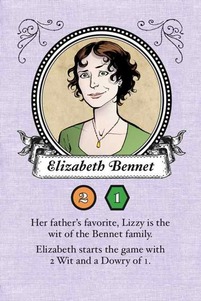 If you’ve ever wanted to star in your very own Pride & Prejudice fan fiction, taking the place of Elizabeth or Jane Bennet and having your pick of Austen’s eligible bachelors, this is your chance. Even if you’ve never read an Austen novel in your life, this game is delightfully fun and engaging for any level of gamer.

My first time playing this game, I chose Elizabeth Bennet because OF COURSE. After a close call with a Wickham elopement, I was able to bring my reputation high enough to cast him off. I then set about improving my wit with extensive reading so I could become a truly accomplished woman for Mr. Darcy.

There is no way to express the immense joy I felt bringing Mr. Darcy and Elizabeth together, as they should be, even in a card game. It was probably the most satisfying ending to any board game I’ve ever experienced. While there is something to be said for playing around with the novel’s outcome, sometimes the greatest triumph can be following in Austen’s footsteps and engineering a marriage of true minds.

If you lived in Regency-era England, would you marry a Mr. Bingley or a Mr. Darcy, or would you prefer to make it on your own? Let’s discuss it at length over a series of eloquently worded letters, or in the comments section below if you’d prefer.