All of Batgirl's Costumes, Ranked - Nerdist

All of Batgirl’s Costumes, Ranked

Batgirl is finally getting her own feature film, coming to us from the Bad Boys for Life directing duo Adil El Arbi and Bilall Fallah. Barbara Gordon is one of DC Comics’ most famous heroes, and it’s about time she got her due. But just which costume is the heroine going to use when protecting Gotham City on screen?

Since 1967, Batgirl has worn several variations of her world-famous costume. Both in the comic book pages, and in other media. We’re sure her live-action suit will take inspiration from her entire wardrobe spanning the last five decades. And we’re here to rank them all, from least favorite to greatest. 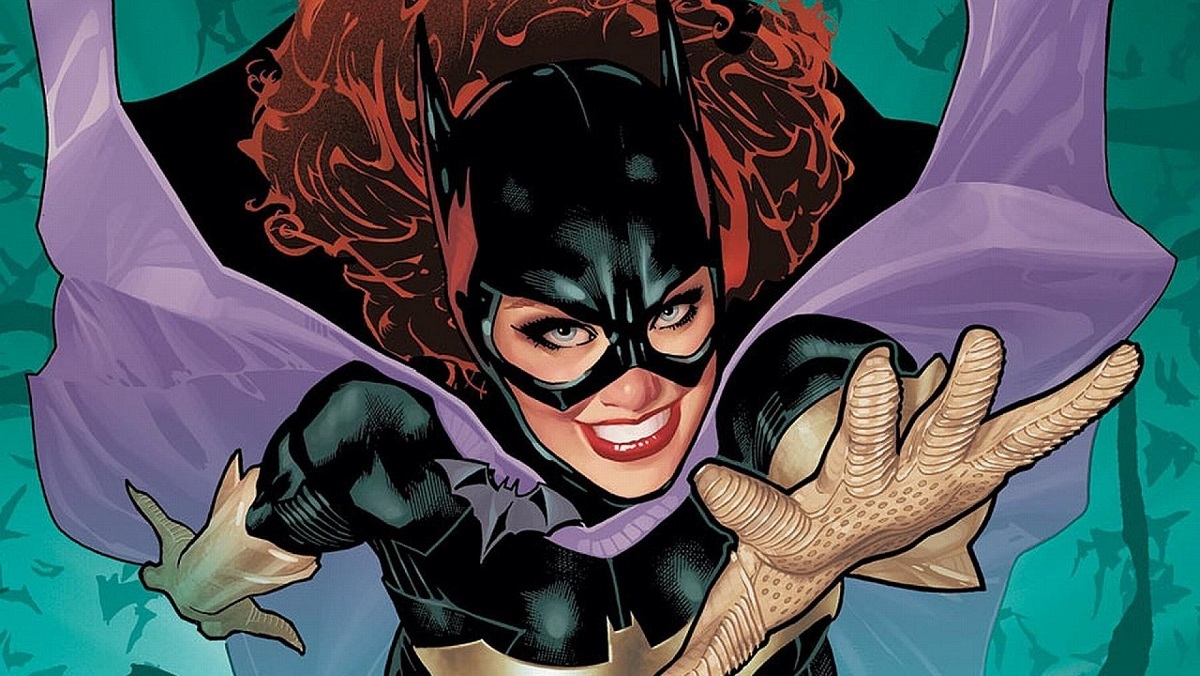 For the purposes of this article, we are only ranking the costumes worn by the Barbara Gordon version of Batgirl. So no Cass Cain, Stephanie Brown, and definitely no Betty Kane. Who essentially wore a red and green Christmas parade outfit. Hard pass. Also, no Barbara Pennyworth from Batman & Robin. Sorry, totally different character.

And we’re not including anything worn by Babs Gordon in just one story either. This means no Elseworlds, or alternate universe versions from DC Comics. We’re sticking to costumes worn by Batgirl for extended periods only. And our first costume comes from the world of animation.

The DC Super Hero Girls cartoon and toyline came out in 2015 and successfully sold the concept of DC heroines to young girls. All of their costumes were reinvented. Some more successfully than others. In the initial concept, Batgirl loses her famous cowl and cape, and replaces them with a hoodie and mini bat wings. It’s totally cute, but loses too many essential elements of the original costume’s silhouette. So for that reason, it comes in last.

For the Young Justice animated series, Babs wore a pretty classic version of her costume. It sticks to what we know as “Batgirl” pretty closely. But, the usual touches of color that separate Barbara from Bruce is mostly gone. The bat symbol is black instead of bright yellow. Although the lining of the cape is still yellow, it’s more of a mustard color. Too much Batman, not enough Batgirl. 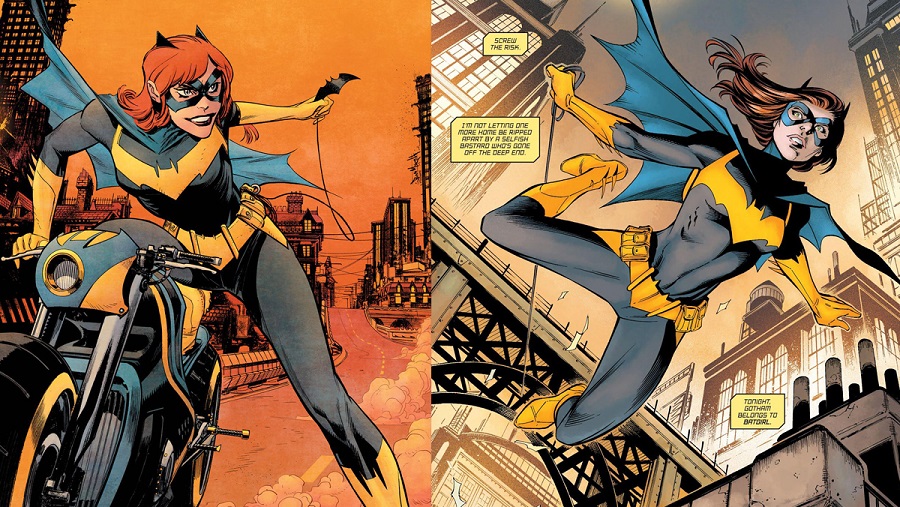 Back in 2018, Batman: White Knight artist Sean Gordon Murphy redesigned Batgirl’s costume once more for her ongoing series. He made some interesting choices, like ditching all the purple and going back to her ’70s/’80s gray colors. Also, he made the bat symbol a harness of some sort. The only reason this otherwise cool design is ranked this low is that it ditched Batgirl’s signature cowl for a domino mask with pointy ears. That just doesn’t say “Batgirl” to us. Besides that aspect, this costume is groovy.

For the 2004 Kid’s WB animated series, the show’s designers took inspiration from the anime Battle of the Planets character Princess. Babs has a skirt and thigh-high boots, not something she’s ever worn in the comics. It’s one of the most different costumes from her traditional looks, but it’s nevertheless a fun take. We love the big Spider-Man eyes for the cowl, as well as the signature Batman ’66 purple. 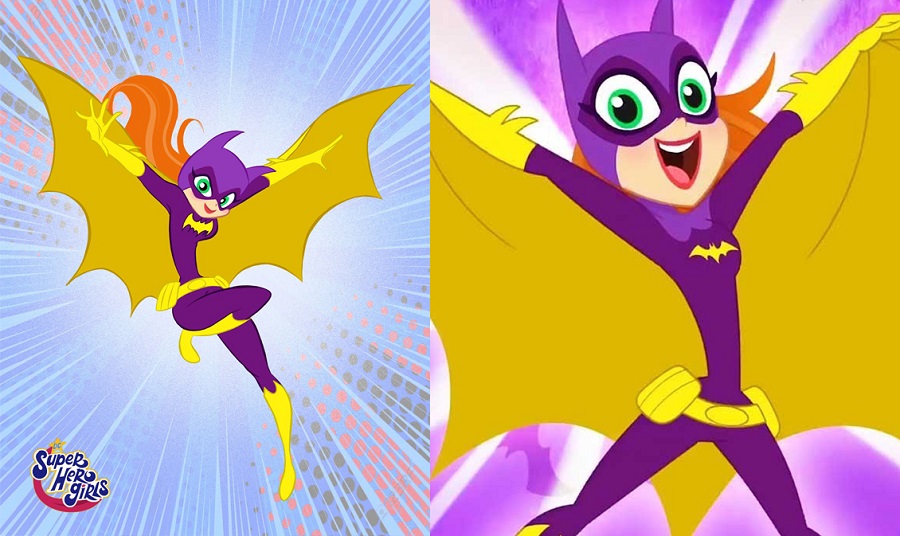 Batgirl had a more comics accurate costume for the second incarnation of the DC Super Hero Girls. Series creator Lauren Faust (My Little Pony: Friendship is Magic) basically did a stylized version of the Batman ’66 costume, only adding in the yellow boots and gloves from the comics. It’s pretty fabulous, and just quintessential Batgirl all around.

Arguably still the best version of the Batman mythos is still the ’90s Batman: The Animated series. Bruce Timm gave us some of the most iconic versions of the Gotham characters in any medium. And this includes Batgirl. He largely stuck to the classic Silver Age/Bronze Age design from the comics. Only more streamlined. Her original suit is gray, with the New Batman Adventures suit going black instead. We prefer the black, as it is sleeker. But either one is pretty great. 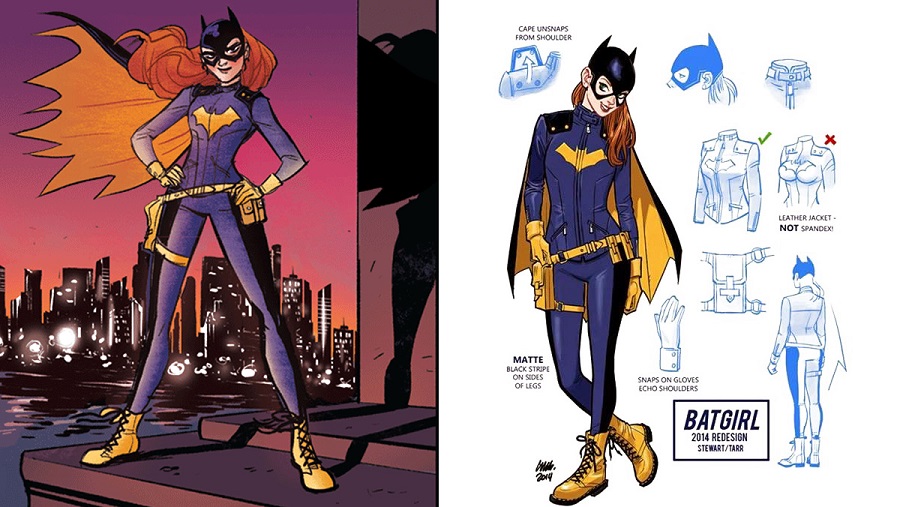 In her 2014 mini-reboot, Barbara Gordon moves to the Gotham City neighborhood of Burnside. There, she makes all kinds of young hipster friends, and gets a new costume to go with her new home. It’s actually a fantastic update to her classic purple, black and yellow color scheme from the Batman ’66 series. Even if the Doc Martens-style boots are more cosplay than superhero. If we have one big critique, it’s that it is just too busy. Although we rank it as fifth, this might make for the best live-action costume. 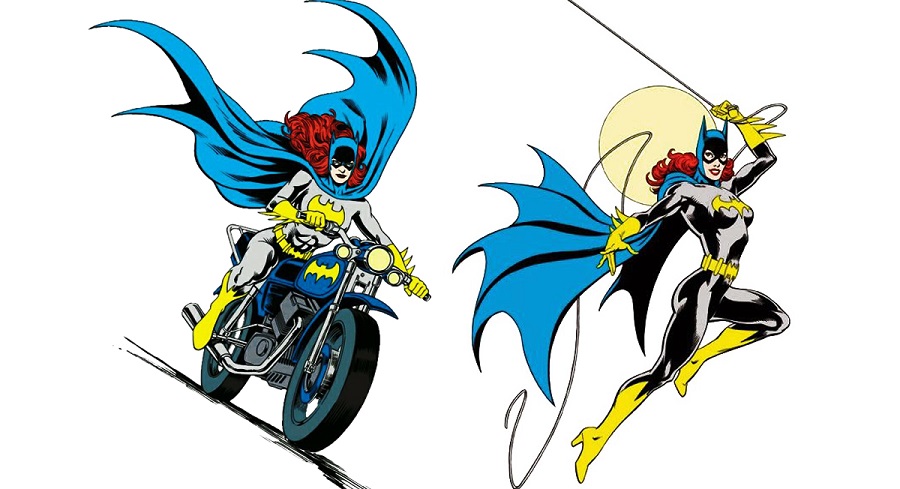 Starting in the early ’70s and stretching out into the ’80s, Batgirl wore a nearly identical version of her original costume. Only she traded in the black for gray. This is probably to match what Batman wore in the comics at the time, known as the Bronze Age. It’s a classic suit, but it comes in fourth place only because gray is just not as striking as black or purple. 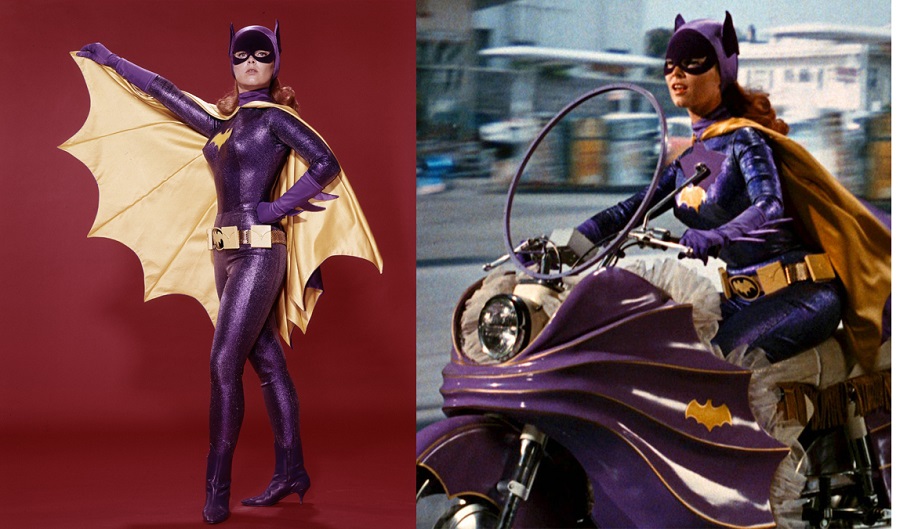 This is the costume that made Batgirl world famous. Worn by Yvonne Craig in the last season of Batman ’66, the show’s costume designers took the basic silhouette of the comics costume and traded in all the black for glittery purple. They also decided not to keep the yellow boots and gloves, making the whole body of the costume head-to-toe purple. Except for the bright yellow cape. Although her comics counterpart had more subdued colors, this costume was so iconic, the purple eventually made its way into the comics too. Because it’s just that great. 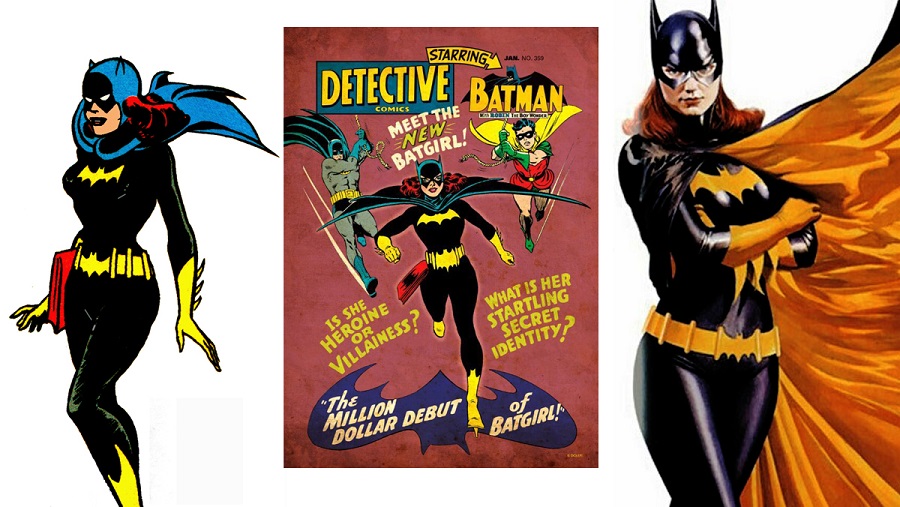 Legendary artist Carmine Infantino created many iconic costumes for DC, including the Barry Allen Flash. But he knocked it out of the park for his January 1967 design for Batgirl. The solid black suit, the yellow emblem, boots, and gloves. It all works. It’s because this first costume was so good that the variations on it have only ever slightly nudged away from the original look. It would be our number one, but… 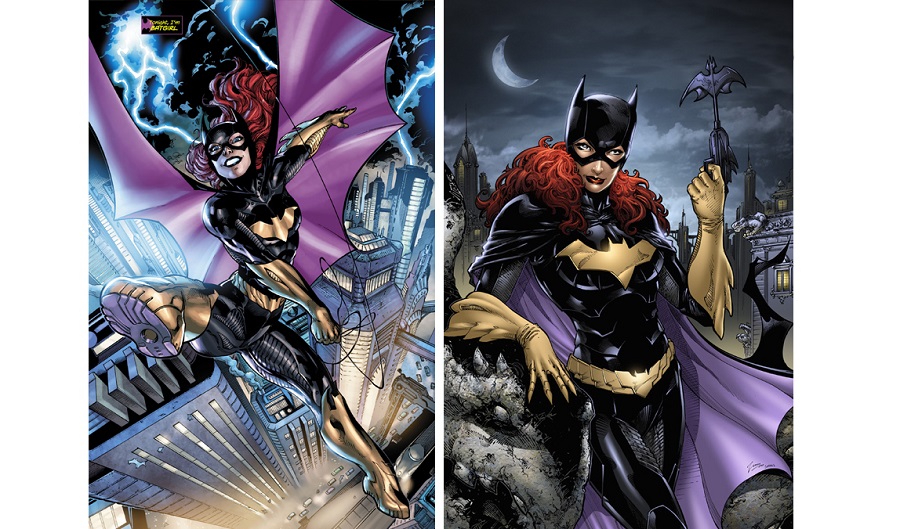 When DC rebooted their universe in 2011 with the “New 52” initiative, they returned Barbara Gordon to her role as Batgirl after decades away. Her costume stuck very closely to the perfection of Carmine Infantino’s original design, only with more details. It appeared more sturdy and less like spandex. Although it stuck closely to the classic comic book color scheme, the cape had a touch of purple as a nod to Batman ’66. All in all, this costume is the best of all possible worlds. And what we think of when anyone says “Batgirl.” 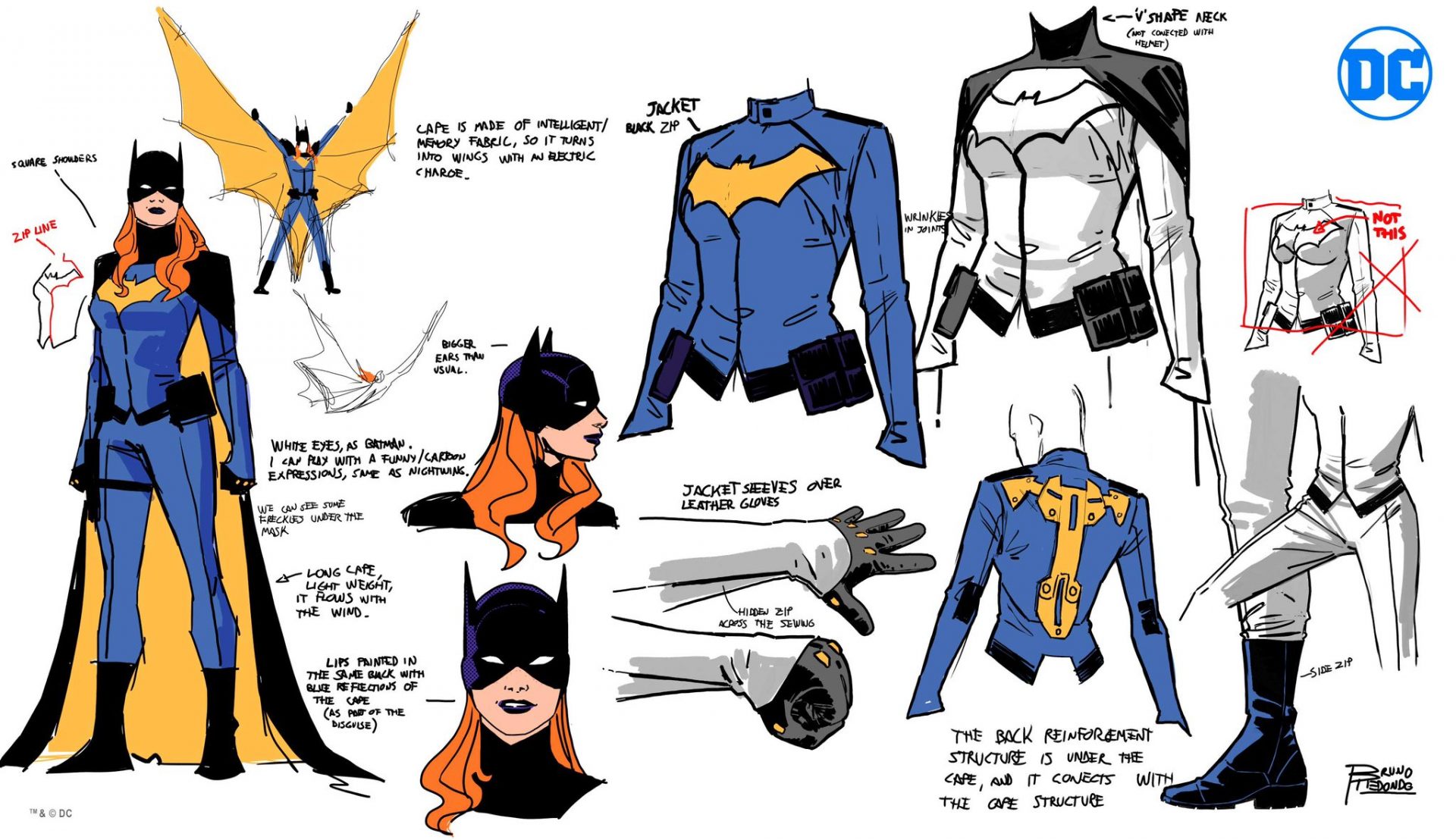 Our top choice for Batgirl’s costume hasn’t officially debuted yet. But just based on early images, it’s our favorite. Artist Bruno Redondo redesigned Barbara’s costume for the upcoming Fear State crossover event in the fall of 2021. And it takes from all the best elements of the previous costumes, drawing from Barbara Gordon’s long comics history.

The classic purple is back, harkening back to Batman ’66. It includes elements of her Burnside costume, but more streamlined and less bulky. The cowl is black like her Young Justice look. And she now has whited-0ut eyes like Batman. The best feature though is a reinforcing structure that connects with her cape, putting less stress on her injured spine. This costume combines the best of the best. And we love it.