First Live-Action ALADDIN Trailer Has Some Familiar Sights (and Tunes)

Even among the likes of fellow Disney animated favorites,Â  Aladdin feels like a tough act to match. The 1992 hit could be credited, at least in part, with the kick-off a new brand of Disney animated film: one armed with celebrity voice actors, snappier songs, and a sharp and savvyâ€”albeit anachronisticâ€”sense of humor. (And the uptick in caliber of animation should go without saying.) As such, Guy Ritchie’s live-action remake of the modern classic has its work cut out for it, even if it isn’t exactly vying to change the face of contemporary children’s cinema in quite the same manner. From the looks of the first trailer, released Thursday evening, the film doesn’t seem shy about borrowing familiar elements from its predecessor.

Though we don’t see (or hear) a lot in the first trailer, what we do see and hear should bring us right back toÂ Aladdin ’92. There’s the immediately recognizable sights of the Agrabah skyline and the Cave of Wonders, whose exterior and interior alike are essentially identical to that of the animated film. Plus, we see characters like Iago the parrot and Aladdin himself, both suggesting Ritchie’s version won’t be too far a cry from what we remember. And of course, the sounds: the tunes ofÂ “Arabian Nights” and “Friend Like Me,” both of which we look forward to hearing in full in this new version of the tale. (Though it should be mentioned that the updated ditties are said to involve new lyrics, so brace yourselves accordingly.) 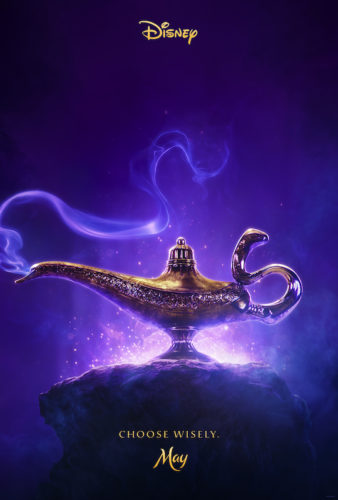 What do you think of this first look at Ritchie’sÂ Aladdin? Let us know!