The apocalypse has never been more adorable. But don’t let the cute critters fool you—Aftermath is a tabletop game that can take you and your family on a post-apocalyptic adventure unlike any other.

This cooperative game comes from Plaid Hat Games, the makers of Mice & Mystics. You’ll take on the role of a critter on a mission to find food and keep your colony safe in a world where humans have mysteriously disappeared. But predators and enemies, a dangerous world, and even time itself are working against you. Can you and your friends survive and thrive? 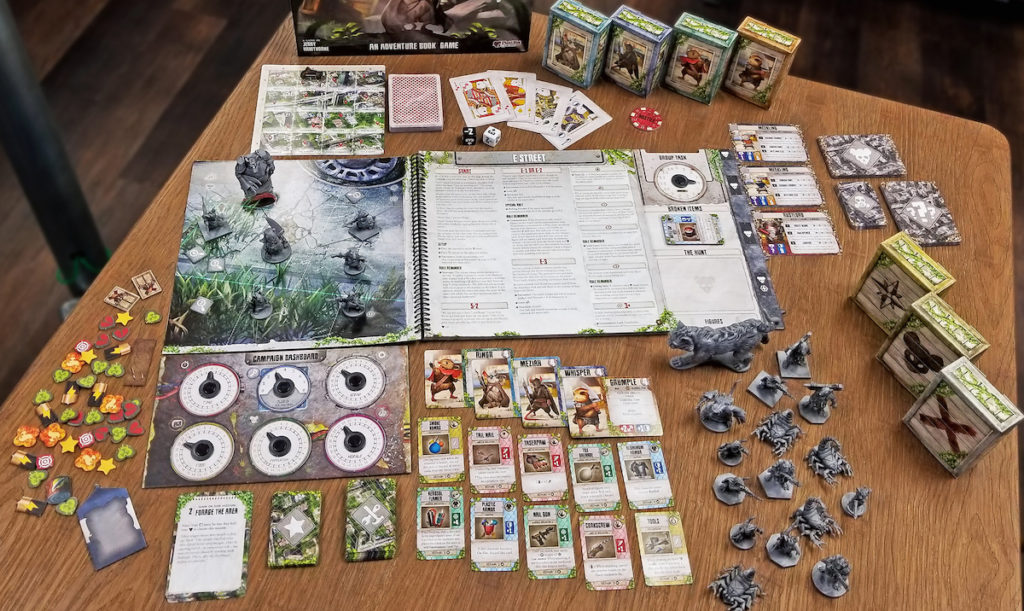 Like the first two games in Plaid Hat Games’ Adventure Book Game series, the story unfolds on a book that doubles as the game board. Each turn of the page is its own mission to play through, culminating in a campaign that you’ll explore through the course of the entire book. The story is told through gameplay, although the pages also offer short reading moments as well. Not only will you guide your characters’ actions, managing the colony you left behind is just as important, giving all players a well-rounded adventure with elements of both role-playing and strategy.

You and your friends each choose a character, and then start reading to enter the world of Aftermath. New characters can be chosen each time you play, and the number of players can vary as well, making the campaign flexible and open to other adventurers who might want to join in. You can also “save” your progress along the way, creating a persistent world you can re-enter any time you choose.

On each turn, draw action cards, perform actions, and determine how safe the area is. A player has a choice of several actions, including moving on the board, attacking an enemy, recovering, and scavenging. Let Becca Scott teach you all about game setup and what you can do on each turn in this episode of How to Play.

You can also catch Becca and friends playing Aftermath in this episode of Game the Game to get a complete idea of the adventures are waiting for you.

Aftermath is now available for pre-order with an expected release this fall. If you’re looking for a cozy game night with the family during the fall and winter, preorder now to start the journey to save your colony.