Tossing out the idea of a first person shooter Euro-style board game is a little nutty. FPS video games are epitomized by twitch reaction and feel good moments of head-shotting a 13 year old who’s talking trash out of his parent’s basement. Eurogames tend to focus on efficiency, contemplative interactions, and cognitive challenge. This is more like brisket and grapes than peanut butter and jelly.

Don’t knock the brisket and grapes until you try it.

This game of disparate elements separated by a conceptual ocean surprisingly works well. You have five players running around an indoor arena blasting the hell out of each other like we’re back in 92 playing Quake on DOS. It’s fast paced and in your face, but it manages to never feel vindictive or punishing. 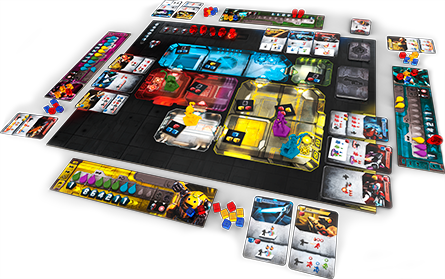 The goal is to amass the most points—Adrenaline can’t completely shed its Euro roots—and you will do that by lighting up other players. On your turn, you will perform two actions which consist of running around and grabbing stuff so that you can open fire. You start with no weapons but need to grab one or more from the options that appear at the spawn points on the map. The implements of destruction are the heart of the game and provide the variety from session to session.

You can grab grenade launchers that blow up an entire space, shotguns that wreak havoc at point blank range, or even a power glove that lets you move before attacking. Weapons can often be enhanced and overcharged by expending additional ammo cubes, the main resource in Adrenaline. This offers a bit of a tactical puzzle as you need to be efficient and deal out as much damage with your two actions, but you also need to grab ammo from around the map and pickup appropriate weaponry to wage farcical arena warfare.

There’s not a large amount of drama ingrained in the design as weapons deal automatic damage and dice are nowhere to be found. Replacing those tense moments of uncertainty is a flush of satisfaction that arises from pulling off huge attack combinations. You’ll teleport adjacent to a group of enemies, pull them all to the same space with your vortex cannon, and then blow the hell out of them with a grenade launcher. When these elements coalesce into huge turns of maximum destruction it feels remarkably satisfying. These are the moments Adrenaline pulls you in and leaves you exhaling with a huge grin.

The scoring mechanism is also interesting as it takes the notion of area control and twists it on its head. Instead of vying for dominance of sections of the playing surface, you’re clawing back and forth for majority of damage on different players. As you nail someone with a big multi-damage attack, you place your own personal blood drop tokens on their board. When the target expires we total up damage and whichever player dealt the most receives the most points, followed by second, third, and so on. You get bonus pointage for dealing the first hit as well as the finishing blow on a target.

This novel concept of area majority via damage is compelling and works well. It provides a more diverse tactical landscape as it offers variety to the targeting options and scoring opportunities. The incentive to spread your damage around is strong and makes for a more even-keeled shoot ‘em up where no one is exactly ganged up on.

As the damage piles up the design does a fantastic job of never dragging you through the muck or punishing you for being the recipient. As your damage track fills you benefit from the namesake adrenaline mechanism where you actually pick up speed and effectiveness. Get hit with a sniper rifle in the face? No problem, you’ve just downed a gallon of Red Bull and are now channeling Usain Bolt. 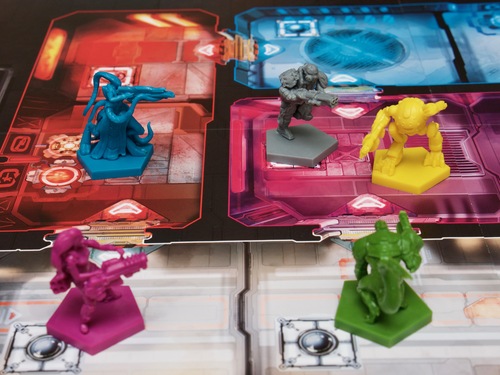 The enjoyable and light-hearted atmosphere is sustained due to how snappy and reactive turns are. This isn’t a game with a great deal of forward planning, but it moves along at an exceptional pace as you can be into the muck and tearing it up, resolving damage and picking up items, in only a few seconds. It has a rinse repeat element of hop around and grab stuff, shoot someone in the face, and then do it all over again that somehow never feels outright repetitive or dull. With new turns you have a varied tactical challenge and must finagle your way into those huge sweet combos that your loins yearn for.

A feel good arena shooter devoid of randomness is a weird thing. But in Adrenaline’s case it’s a very fun thing. I’m not sure this game is bold enough to climb to the very top of best of year lists, but it’s the type of release that will find its way to your table repeatedly. It’s like a warm slice of apple pie that just hits the spot and leaves you wanting seconds.


Are you a fan of arena first person shooters? Does Adrenaline have you all tingly inside? Let us know in the comments below!