Between HBO’s Game of Thrones‘ undeniable success and the growing popularity of miniature wargames, there was a certain inevitability for the arrival of a miniature wargame set in Westeros.  I heard murmurs and rumors of it floating around since 2016, particularly since Dark Sword Miniatures had a license for the literary universe and had been producing miniatures for several years, including one infamous Cersei Lannister that was skillfully painted to make her dress look scandalously sheer.

Combine this with an established audience for but distinct lack of a dominant, publisher-supported ranked miniature wargame (since the discontinuation of Warhammer Fantasy Battles) and it was only a matter of time that a gaming company would find a way to bring ranks of miniatures with Westerosi livery to the table, and sure enough, after running a successful Kickstarter to launch the game, CMON Games released A Song of Ice and Fire (a.k.a. ASOIAF) into the hands of backers and onto the shelves of retailers over the summer. 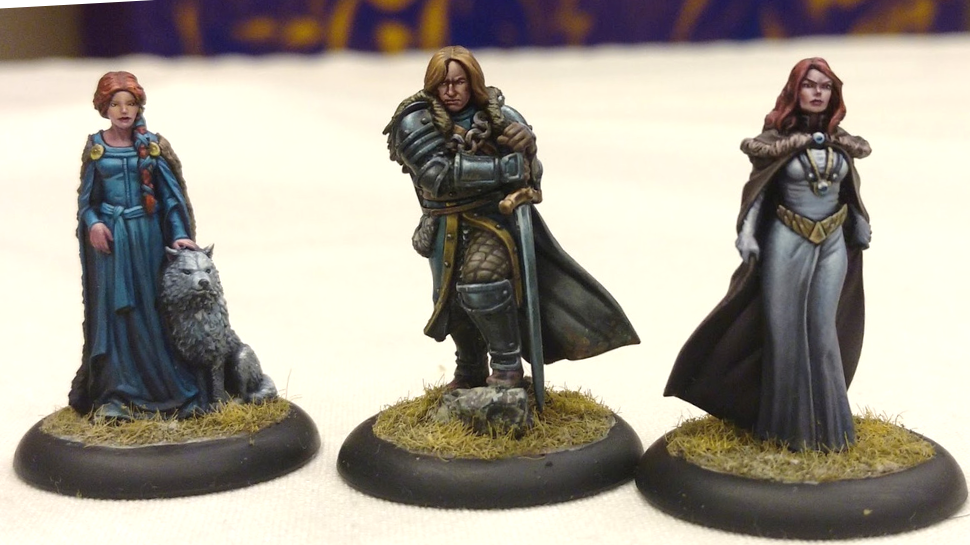 Full disclosure: since its release, I’ve been obsessed with the game, collecting and painting minis, and playing out battles. Despite the lack of dragons, Targaryens, and Arya Stark (which are all presumably going to eventually show up in the game in future expansions), this is one of those games that long time miniature wargamers will find deeply interesting because of how many compelling strategic choices are available. Gamers who may be less familiar with miniature wargames but have some familiarity with boardgames will appreciate the integration of interesting boardgame mechanics to influence the battlefield, including tactical card hand management and worker placement. Newcomers to the hobby as a whole should be warned: the combination of the accessible license and easy-to-learn mechanics puts them at risk to become as obsessed with this game as I am. 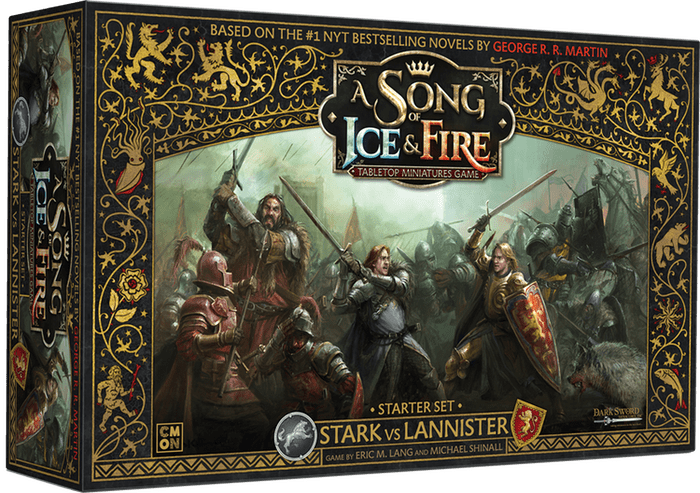 The starter box has everything a pair of players needs to get playing: two playable factions — Starks and Lannisters — with enough unit options to create multiple playable 30-point lists, a rulebook (though its available online for free), terrain, dice, and rulers. The starter set has specific characters that are unavailable in any other expansion: Jamie, Cersei, Tyrion, The Mountain, Sansa, Catelyn, Robb, and Grey Wind. Expansions for both houses have also been made available, including the release of the (faction neutral) House Bolton characters and units. The miniatures are characterful, detailed and come fully assembled. If you’re not a painter, the plastic of the miniatures are color-coded based on their faction, though the miniatures themselves are easy to paint:

Beyond the minis, it’s easy to be sucked into the gameplay experience. The level of refinement and polish designers Eric Lang and Michael Shinall have injected into the game is obvious: it’s fast-paced, movement-oriented, hard-hitting, and immersive: units move around the board, crash into combat, and lots of models die. At the same time, the tactics board and tactics deck allow for non-combat units like Tyrion, Sansa, and Cersei to support battlefield forces by maneuvering behind the scenes and playing politics. Worker placement has never felt so confrontational. 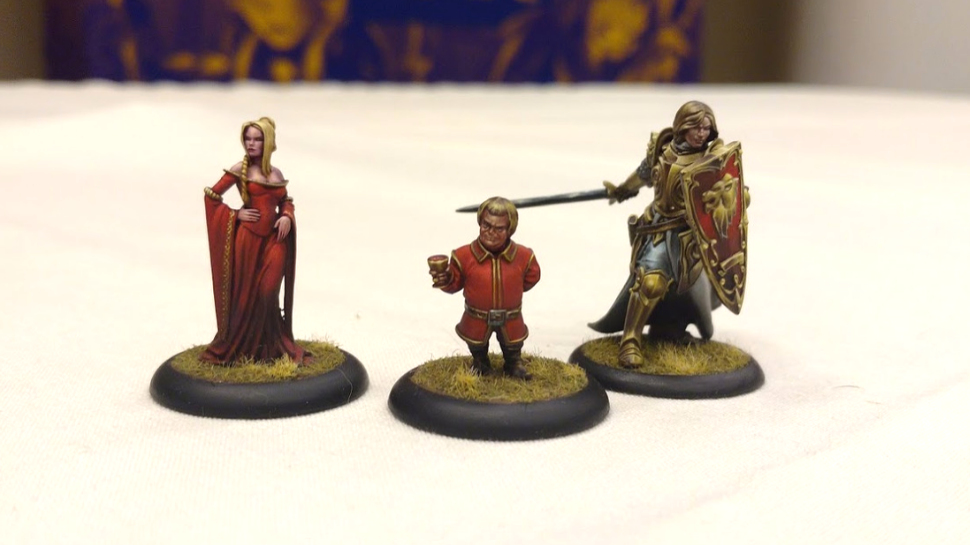 When you play ASOIAF, you can feel as powerful and vicious as the Mountain, as skillful as Jamie (with both hands), as treacherous and underhanded as Cersei, as clever as Tyrion, and as stalwart as a Stark. Despite its simple mechanics, the different playstyles, the various unit combinations, and the strategic opportunities come together to satisfy on many different levels. Translating the characters into mechanics reinforces the immersive experience: Ned Stark and his noble Honor Guard hold fast on objectives unsurprisingly well, where Ramsey Snow, is able to intimidate enemies by torturing Theon. 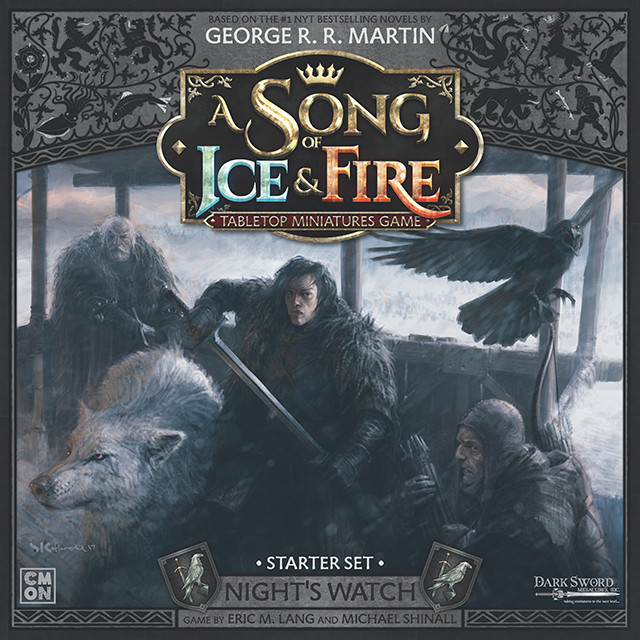 Less than 6 months since retail release, CMON has also released an app that allows for players to build lists as well an entirely new faction unavailable through its Kickstarter: The Night’s Watch. Part of the release of this new faction is a standalone single-faction starter set, complete with Jon Snow and Ghost, enough Black Brothers to create a few 40ish point lists, and everything else one player needs to play a game of ASOIAF. They’ve also teased out the upcoming release of the scapegoats beyond-the-Wall, The Wildlings, complete with a taste of the fantasy elements of Westeros with giants. 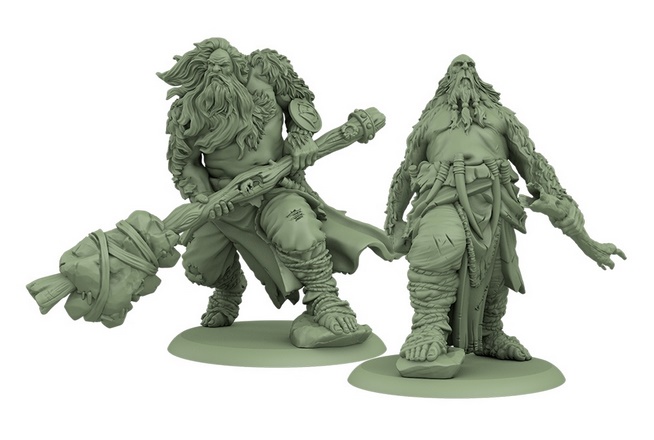 It’s clear CMON has invested in the game, which is required for success in this niche of tabletop: it takes years to get a miniature from concept to the table of a player. The same things that made ASOIAF an inevitability are the things that will make it a success: players hungry for a tactical, immersive miniature gaming experience set in Westeros. Surely I can’t be the only one looking forward to the day where I stand on one side of the table, look at my opponent squarely in the eye, roll a handful of dice and yell Dracarys! as a model dragon breathes imaginary fire across the battlefield.

Who’s your favorite Game of Thrones character? Tell us in the comments!

Disclosure: Review copies of the ASOIAF and Night’s Watch starter sets were provided for media purposes.

Teri Litorco is the contributing editor of Geek & Sundry, author of The Civilized Guide to Tabletop Gaming, a YouTuber, and a social media oversharer: Twitter, Facebook and Instagram.