Apocalypse World exploded into the tabletop gaming scene in 2010. The game provided a spot-on emulation of the post-apocalyptic genre for the gaming table and had indie gaming mechanics that made the game run like a dream. A second edition of the game was launched on January 31st on Kickstarter and it funded within a day! So far, it’s raised over $70,000 from over 2,000 backers.

What’s so radical about Apocalypse World? 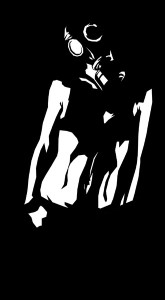 Apocalypse World posits that a role-playing game is like a conversation, and lets it flow like one. Things happen when you say they happen. Anytime you do something at which you might fail (a “move” in the parlance of the game) you roll two six-sided dice. Roll a 10, 11, or 12 and you have a solid success. Roll a 7,8,or 9 and you succeed, but not spectacularly. Roll a 6 or less and the gamemaster tells the player what happens, and the game’s creator, Vincent Baker, wrote, “I promise you won’t like it.”

Furthermore, the game is designed to be extremely low-prep for the gamemaster. Baker wrote emphatically in the first edition of the game, “DO NOT pre-plan a storyline, and I’m not &*%$#@! around.” Rather, gamemasters focus on making the world seem real, and making characters’ lives “not boring.” Baker also advised that gamemasters, “Barf forth the apocalypse.”

He expounded, saying that Apocalypse World game masters should,”cultivate an imagination full of harsh landscapes, garish bloody images, and grotesque juxtapositions. In Apocalypse World, when the rain falls, it’s full of fine black grit like toner, and all the plants’ leaves turn gray from absorbing it. Out among the wrecked cars, wild dogs fight for territory, with each other and with the rats, and one of the breeds is developing a protective inner eyelid of blank bone. If you get too close to them you can hear the click-click when they blink.”

With innovative mechanics, a setting we all know and love, and a bloody-minded attitude, it’s easy to see why the game took off, but it became an institution because Baker allowed other designers to use his system. Over two dozen games have taken the Apocalypse World system and used it to create games ranging from Dungeon World, which ports the system into a world very similar to that of Dungeons & Dragons, and Monsterhearts, which is a game about teenage vampires, werewolves, and other monsters falling in love. The Apocalypse World system has in many ways become the default indie RPG system.

Why is the Apocalypse World system so popular among other designers? Baker said, “My theory is that it takes some of the big problems in RPG design and illuminates them in a way that makes them easier to tackle. It shows by example how to use a game’s design to express your insights into a genre or arena of competition or whatever you want your game to be about.”

Have you played a game powered by the Apocalypse? Let us know in the comments!