A Peek Into The World of Legend of the Five Rings

Two samurai bow to each other before beginning a fatal duel that will end in the single stroke of a sword. A gigantic oni peers over a massive wall into the eyes of the warriors ready to kill the creature or die trying. A strange rider gallops at full speed across a wind-swept plain with an urgent message for the Emperor. All of these images and more are what built the fan base for Legend of the Five Rings, a game setting created 22 years ago as the basis for a CCG that expanded into boards, RPGs, comics and novels. Fantasy Flight Games acquired Legend of the Five Rings in 2015 and is releasing a new Living Card Game in the setting at Gen Con 2017. 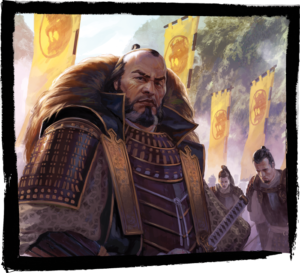 For those unfamiliar with the setting, imagine A Game of Thrones inspired by feudal Japan instead of the War of the Roses. Seven great clans—Crab, Crane, Dragon, Lion, Phoenix, Scorpion and Unicorn—all serve the Emperor of Rokugan even as they jockey for his favor through war, honor and intrigue. We got a chance to talk with Katrina Ostrander, Fiction Editor at Fantasy Flight Games and Story Team Leader for Legend of the Five Rings, for an inside look at what’s returning and what’s changing in the land of Rokugan under the guidance of the new ownership.

“Rokugan is an epic and beautiful land,” said Ostrander, “where the samurai of the seven Great Clans serve the Emperor as warriors, courtiers, priests, and monks. Beyond the trappings of kimono and katana and cherry blossoms, the setting dives deep into political intrigues and societal constraints that force characters to choose between honor, duty, and their own desires.”

Rokugan boasts a mix of Japanese and other East Asian cultural elements rather than the traditional elves and dwarves of Western fantasy. Fans of Kurosawa samurai dramas, anime, manga, and East Asian mythology and folklore will discover elements to love in Rokugan.

Another exciting element of Legend of the Five Rings is the evolving storyline. CCG tournaments shaped many elements of the original and FFG will continue that tradition in their LCG. “In the Living Card Game,” said Ostrander,  “fans will still shape the story in impactful ways that have far-reaching consequences. Things will work differently than they’re used to, but fans can rest assured that we understand it is an important aspect of the universe that needs to be preserved.” 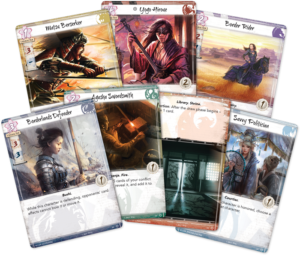 Fans of the setting strongly identify with their favorite clans, even going so far as to getting tattoos of the clan symbols on their bodies. “Clan loyalty is one of the biggest aspects of the old card game,” said Ostrander, “and I believe that the fans will still feel pride for and identify with their favorite clan in the new game. The clans are their iconic selves, with all the associated themes and strengths and weaknesses. The history of those clans and of Rokugan itself is familiar. The Tournament of the Kami, the various rivalries between families, institutions such as the Emerald Championship—these elements that make Rokugan, Rokugan, are all there.”

There will be changes, but still plenty of familiar faces mixed up in the intrigues of the Great Clans. Rather than a continuation of the original storyline, Fantasy Flight is going back to basics to tell their own stories in Rokugan. 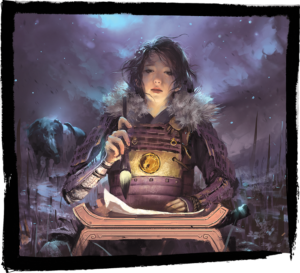 “We kept the essence of each Great Clan intact,” said Ostrander, “but each of the clans faces different struggles than they did in the previous timeline. For a thousand years the Crane usually have been called the “masters of court,” but after the tsunami that devastated their coastal farmland and other crises unfold in the Imperial Court, the Scorpion are close to usurping this title for themselves. Whether or not that’s a good thing for the Scorpion is another question entirely. The Unicorn Clan, too, looks somewhat different, with more emphasis placed on the cultural elements they picked up during their time beyond the borders of Rokugan: the use of scimitars, the strength of the Moto horde, and the talismanic name magic called meishōdō.”

Ostrander also hinted about some returning faces to the story of Rokugan. “Fantasy Flight Games is returning to a classic era with captivating characters and dramatic struggles. And yet, the story will be fresh—even if you are familiar with the AEG stories of Bayushi Kachiko, Hida Kisada, Isawa Tadaka, or Utaku Kamoko, you will still be surprised. It’s a re-imagining, not a retelling.” 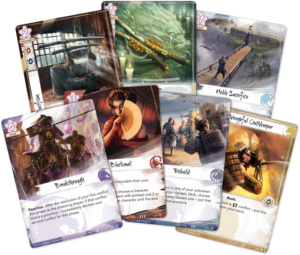 Samurai old and new who come to Gen Con this year will be the first honored with a chance of to play the new Legend of the Five Rings. “Regular retail boxes will be available for purchase at Gen Con in limited quantities,” said Ostrander,  “similar to the launch of the second edition of A Game of Thrones: The Card Game. However, anyone who signs up for the inaugural tournament at Gen Con will be guaranteed a core set to play with. Players who can’t make it to Gen Con may be able to demo the game at their friendly local gaming store before the full release date.”

Fans of the game can also find out more as Fantasy Flight will be hosting an AMA for the game on Reddit at 11 AM CT tomorrow, April 20.

What is your favorite clan? Let us know in the comments.