A New Nightmare Emerges for 'Bloodborne: The Card Game' - Nerdist

A New Nightmare Emerges for ‘Bloodborne: The Card Game’

We love tabletop games here at Geek & Sundry, and we love to showcase the best games out there. If you want to stay tuned into what’s new and exciting in the world of tabletop games, be sure to tune into Game the Game hosted by Becca Scott, with episodes going live each week that you can watch here at GeekandSundry.com.

“I would tell you not to be afraid, Hunter, but the truth is that you should be.”

Travel back to the city of Yharnam, where new and bloodthirsty monsters await you and your fellow Hunters in The Hunter’s Nightmare expansion for Bloodborne: The Card Game. 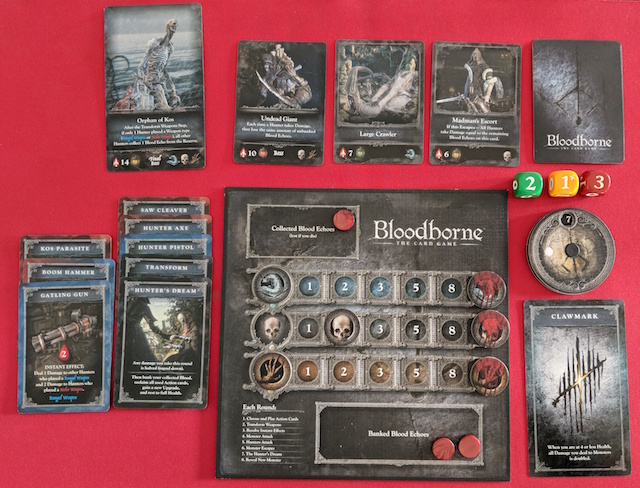 In Bloodborne: The Card Game three to five players take on the roles of Hunters and enter the Chalice Dungeon in the nightmare world of Yharnam. The Hunter’s Nightmare expansion adds a new array of frightening creatures that players fight cooperatively to vanquish. Only one player will emerge victorious, though, so it’s not a matter of if, but when, your fellow Hunters turn against you.

During each round Hunters must face off against their foes in the dungeon, where they’ll reveal an action card, transform weapons, and resolve any instant effects. Timing is key here; play a weapon card to damage the beast or use equipment to heal your wounds before death overcomes you.

Every time a player damages a monster, they take Blood Echoes, which will ultimately determine the winner. When a monster is killed, any Hunter with a Blood Echo from that monster will claim a Trophy matching the monster type. If a Hunter is killed, then they lose their unbanked Blood Echoes.

Much like the video game it’s based on, the likelihood of death increases in every round in Bloodborne: The Card Game. However, Hunters do have one respite: the Hunter’s Dream card, which allows them to reset their Health, bank their collected Blood Echoes, return action cards to their hand, and take a Hunter Upgrade card that improves their fighting capabilities for the next round.

After the Hunters have fought their way through the dungeon’s denizens and the final boss, the player with the most Blood Echoes wins.

Each player now receives a Rune Card which grants an additional power for that player to use throughout the game. For example, a player with the Guidance Rune will claim an additional Trophy of their choice as well as heal 2 Health for every monster they kill. 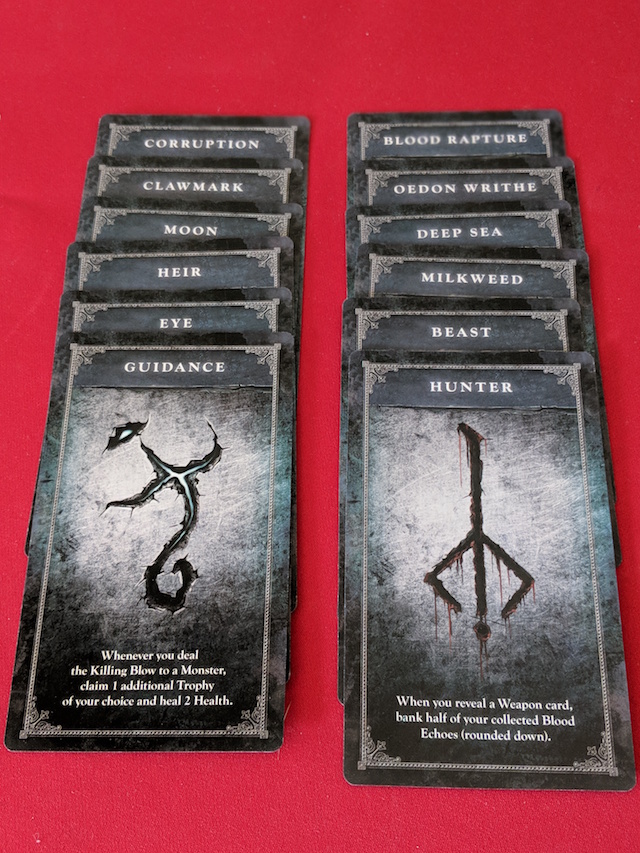 While Runes help players, the new Death Tokens hinder their ability to score points by limiting the number of Trophies they may accumulate. Every time a Hunter is killed (either by a monster or by another Hunter), a Death Token slides onto the Trophy Track to eliminate the possibility of bagging those higher-scoring Trophies. 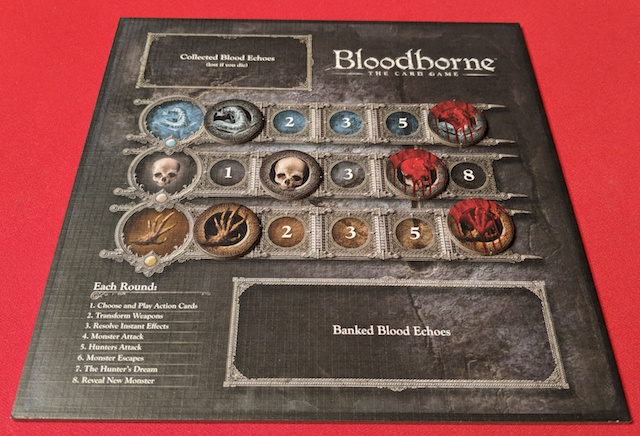 The Hunter’s Nightmare also contains new decks of Hunter upgrade cards, monster and boss cards, and final boss cards, all of which are shuffled in with the base game decks, thus offering a different experience during each game.

Hunter upgrade cards will aid players in their journey into the Chalice Dungeon. The new cards include ranged and melee weapons such as the Gatling Gun and Kos Parasite as well as instant effects like Iosefka’s Blood Vial, which allows players to heal and immediately bank all unbanked Blood Echoes. 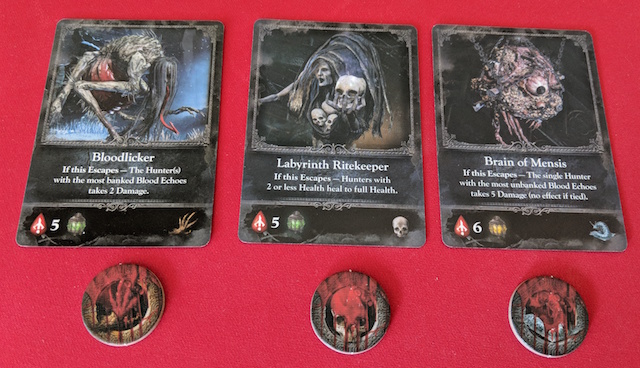 Of course, the Hunters aren’t the only ones getting upgrades.

A new deck of cards features more treacherous monsters and bosses. Whether it’s the Nightmare Apostle or the Undead Giant, players will have their hands full trying to defeat these beasts before facing new powerful final bosses as they try to emerge as the lone survivor and winner.

The Hunter’s Nightmare expansion breathes new life into Bloodborne: The Card Game with its Runes and Death Tokens elements, which blend seamlessly into the original and offer new challenges without bogging down gameplay. Replayability has increased with nearly 100 cards that add variety to each game. The Hunter’s Nightmare is a dream expansion that will have players delving back into the dungeon more often.

Do you play horror-themed games? Tell us in the comments! And be sure to check back here on GeekandSundry.com for Game the Game episodes every Thursday morning.