The original Love Letter card game, designed by Seiji Kanai and published by Alderac Entertainment Group, is praised for its colorful theme, detailed illustrations, and easy-to-understand rules. The aim of the game is to deliver a love letter to the princess, which you must achieve through the tried-and-true tactics of bluffing, deduction, and good old fashioned luck. Personally, I have spent many an hour playing games upon games of Love Letter, trying to collect as many tokens of the princess’ affection as I can. You can watch the episode of TableTop featuring Love Letter to get more familiar with the game.

Love Letter is set in the land of Tempest, where several other AEG games also take place. There are currently six releases in the Love Letter series, each re-themed to fit worlds from that of Batman to that of Sterling Archer. You can find them all on AEG’s website; and if you need help deciding between some of them, you can check out our article on how to figure out which Love Letter theme is for you. But I can make a case for one version in particular, and that version is Love Letter: The Hobbit – The Battle of the Five Armies. 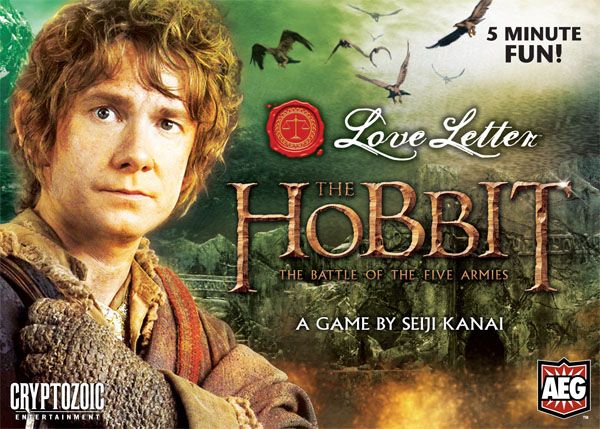 Beyond the mouthful of a title, Hobbit Love Letter (as it is affectionately called) is a gem of a game, and I’m not just saying that because of the literal gems that you win upon victory. It’s a re-theme of an already successful and addictive game that manages to inspire (in my opinion, anyway) more fun than the original.

First, the game implements the Battle of the Five Armies setting into Love Letter in a clever and unique way. Rather than trying to deliver a love letter to the Princess, players are instead searching for the Arkenstone, which itself takes the place of the Princess in card value and effect. After every game you win, you gain an Arkenstone token—the object you seek in game is actually the object you win in real life. Easy to understand, and it’s always fun to get your hands on the shinies.

Rather fittingly, Smaug is the guard, keeping watch over his hoard and calling out intruders. Bilbo is the Countess at 7, and Thorin is the King at 6. While the Arkenstone is Thorin’s birthright, Bilbo is after all the “master burglar” who eventually gets his hands on the desired object, so it makes sense that he has a higher card value.

There are also some clever additions to the base game that make gameplay a little more interesting. The one ring is added as a card with the value of 0, but at the end of the game it gains a value of 7, the same as Thorin. Throughout the game, the one ring is an invisible challenger, only to reveal its true power when it matters most.

Tauriel and Legolas take the place of the deck’s two Barons and have opposing effects. Playing Legolas knocks out the player with the lower value card, whereas Tauriel knocks out the player with the higher value card. Fili and Kili are the Prince, but, unlike the distribution of Legolas and Tauriel, Fili and Kili are not separate cards. The 5-value cards in the deck both say “Fili and Kili,” and they do the exact same thing. The two brothers are always together and act as one inextricable, sexy dwarf unit.

Overall, Hobbit Love Letter covers a game of light-hearted court intrigue with the skin of Tolkien’s epic quest of warring armies and egos. And it does so in a way that adds some fresh twists while managing not to take away from the original game. Hobbit Love Letter is by no means deep or involved, but it is certainly fun, and the Hobbit theme is just as entertaining as it is well thought out. A friend recently gave me Love Letter: Batman Edition which, aside from a basic premise change and some nifty card images, does not differ significantly from the original. It drove me straight back into the arms of Hobbit Love Letter: the one true game under the mountain.

Which re-themes of classic games are your favorites? In some cases have these re-themes surpassed the originals on which they’re based? Let us know in the comments!