A JEDI, YOU WILL BE Teaches Younglings the Force (Exclusive) - Nerdist

A JEDI, YOU WILL BE Teaches Younglings the Force (Exclusive)

The Star Wars universe overflows with advice we can all take to heart. Messages of hope, encouragement, and love. An emphasis on centeredness and wisdom. Many of those quotes come from a little green Jedi Master known as Yoda, who was first introduced in Star Wars: The Empire Strikes Back. That film celebrates its 40th anniversary this year. Mark the occasion with the upcoming children’s book A Jedi, You Will Be.

Nerdist has an exclusive look at the cover art for the book, written by Preeti Chhibber and illustrated by Mike Deas. It shows our favorite green guy perched atop the feet of an upside-down Luke Skywalker, recreating a memorable scene from The Empire Strikes Back. 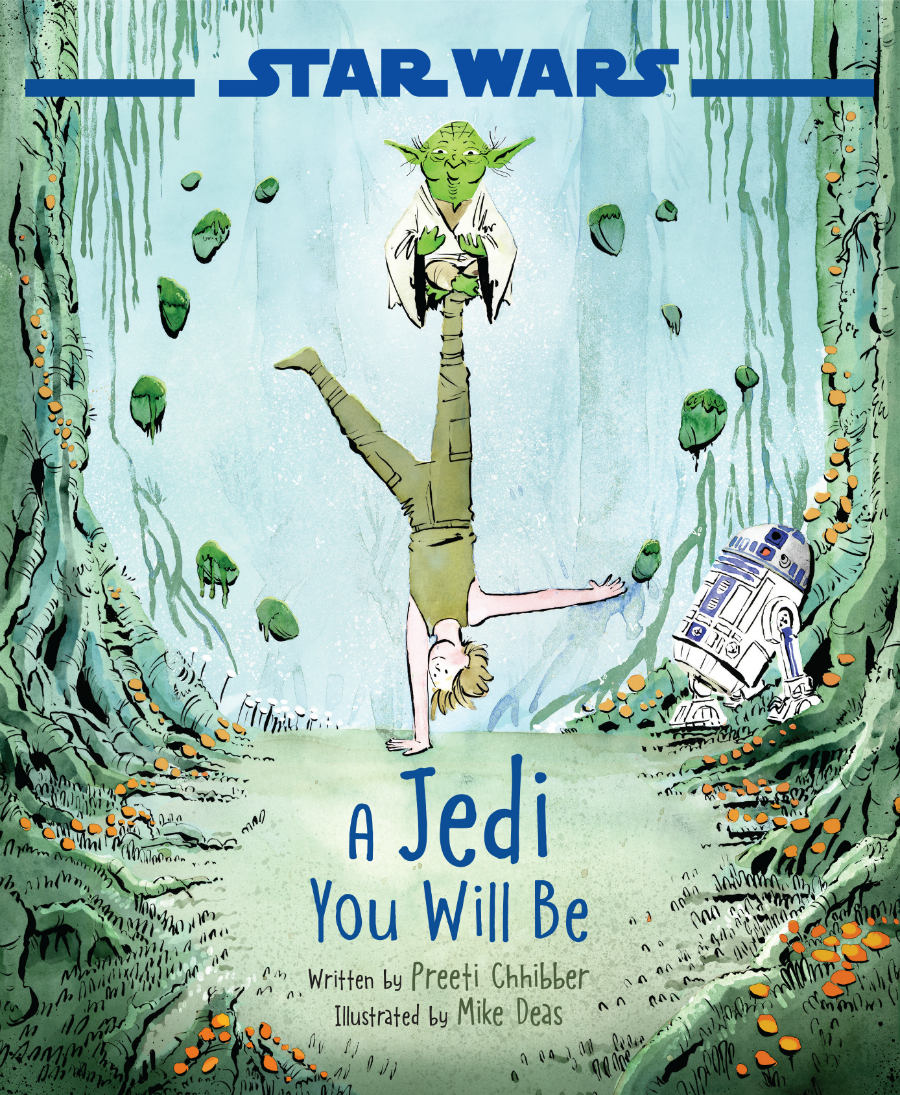 Yoda narrates the adorable book and imparts wisdom from the Jedi Order to the youngling reader. Chhibber—who used to work in children’s publishing and whose writing work has appeared in SYFY, The Nerds of Color, and The Mary Sue—was approached by Lucasfilm about the book last year and was immediately intrigued. “I largely cut my teeth on middle-grade and young adult books during my years in the publishing industry and as an author, though I’ve always loved the picture book medium,” she told Nerdist.

A Jedi, You Will Be is a 48-page story book that is heavily illustrated by Deas. Chhibber found the process of writing an illustrated book to be unique. She had to “figure out what the text was, and how it would be broken up, and send over recommendations for what the paired art could look like on each page/spread,” she explained. To help keep things organized, she wound up cutting up scrap paper, printing out the script, and pasting it onto pages to see how the storytelling could work.

Lol sometimes writing time turns into arts and crafts time so you can figure out flow pic.twitter.com/GFozpRSSkR

Chhibber, a huge fan of Force lore, was excited to weave lessons from The Empire Strikes Back into the text of A Jedi, You Will Be. It’s the film where Yoda describes what the Force is to Luke.

“My ally is the Force, and a powerful ally it is. Life creates it, makes it grow. Its energy surrounds us, binds us. Luminous beings are we, not this crude matter. You must feel the Force flow around you. Here, between you, me, the tree, the rock, yes, even between the land and the ship.”

“That idea is not terribly far off from my own religion, and Star Wars has always been heavily influenced by East and South Asian philosophies, so it was great to get to be a part of putting that into context for young readers,” Chhibber said. “The idea of deep connections between people and the world around us is an important one, especially now.”

As for writing in Yoda’s trademark backwards speaking pattern, Chhibber said it was harder than it might sound! “There’s a rhythm and cadence we’re used to for Yoda, and just flipping words around doesn’t always feel natural,” she explained. “So that was tough, but got the hang of it, eventually I did.”

The final result, we cannot wait to see! A Jedi, You Will Be is set for release from Disney Lucasfilm Press this October 20.