A Guide To Which Fluxx Theme Is the Best For You

Fluxx is one of the most fun games I’ve ever picked up and played with friends at a party. The starting rules are simple: “Pick a card. Play a card.” These cards include New Rules, Goals, Keepers, and Actions, which each effect the game tremendously. For two to six players, every game of Fluxx is constantly a frenzy, but before you play, you need to know which version is right for you. Every version contains subtle differences that are worth exploring depending on what state of flux you want to be in! 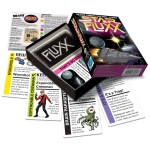 Grab your laser swords or photon blasters and get ready to blast off to adventure with Star Fluxx. Containing lots of winks and nods to your favorite sci-fi franchises like Star Wars, Doctor Who, and Alien, what sets Star Fluxx apart from other version of Fluxx is that the Creepers in this game (cards that have automatic undesirable effects) attach to your Keeper cards. So whether your Starship is hit with a malfunctioning creeper or you’ve found your Expendable Crewman taken over by a brain parasite creeper, playing Star Fluxx feels like you’re reliving the best of science fiction, mixed and remixed in hilarious and heart-pounding ways. 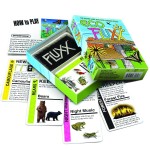 It’s either eat or be eaten out here in EcoFluxx. Keepers are represented as animals (bears, bats, bugs, and more) and Creepers are represented as forces of nature (floods, fires, droughts) that affect everyone on the board and are passed around until certain conditions are met to end them. The Goals in this game can be charmingly cute (like the Sunshine Keeper plus the Water Keeper equaling a Rainbow) or as startlingly frank as nature itself (The Snake Keeper eats the Mice Keeper). For Planet Earth or Captain Planet fans, the circle of life reigns supreme in EcoFluxx. 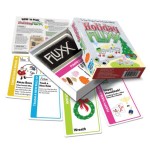 Celebrate the chaos of family fun with Holiday Fluxx. Let Christmas, Halloween, Hanukkah, Thanksgiving, Kwanza, and even New Year’s duke it out to see which day reigns supreme. Perfect for playing with your younger cousins or even grandparents, Holiday Fluxx keeps things light until you drop a Surprise card train on them! Canceled Plans, Stop That, That’s Mine, and Veto cards allow you to perform game-changing actions on your turn, but more importantly, on other players turns. At least you aren’t arguing about politics at the dinner table when you’ve got Holiday Fluxx to play. 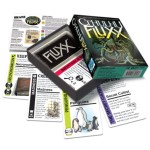 At the mountains of madness lies Cthulhu Fluxx, the version of Fluxx that will drive you insane (not really). What makes Cthulhu Fluxx distinct are the Ungoal cards that pay homage to Cthulhu creator H.P. Lovecraft’s twisted and shadowy mythos. If an Ungoal is placed on the table and the conditions are met (Keepers and Creepers have Doom Points in this version) everyone loses! More nefarious than other versions of Fluxx, Cthulhu Fluxx will take players to the brink and beyond. 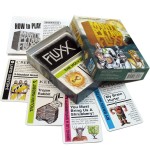 Looney Labs joins forces with Monty Python to make a Monty Python and the Holy Grail-themed Fluxx game that features the kind of lunacy and references you’d expect from everyone’s favorite Flying Circus. Relive all your favorite moments from the film with Goals like bringing forth the Holy Hand Grenade, bringing the Knights Who Say “Ni!” a shrubbery, and more. Things get silly when you play New Rules cards like “I Want To Sing!” where any player can sing a few bars of a Monty Python song to draw an extra card or “Fake Accent” where any player gets to play extra cards if they maintain an “outrageous” accent during their turn or other players’ turns. Get the Castle Expansion to add those wacky French Persons and their taunting into the mix.