The universe of Star Trek is full of hope, optimism and the idea that humanity is basically good. These general themes have allowed various parts of the franchise to glimpse into another version of the setting full of pain, betrayal and evil facial hair. Star Trek may not have invented the evil reflection style character, but Spock’s goatee in the first Mirror Universe episode is certainly one of the reasons the trope is called the Beard of Evil. Shield of Tomorrow, our Star Trek RPG show, recently took a trip into this universe, but nearly every version of Star Trek had made a stop there, either on film or in the comics and novels. Here’s a look at the episodes that helped define this fascinating alternate reality. 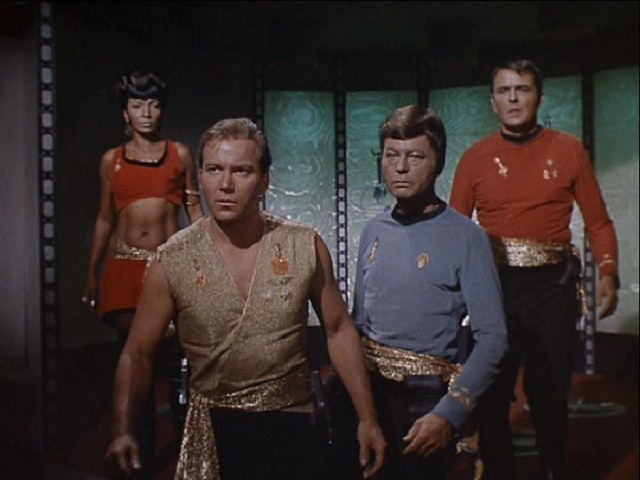 The first glimpse comes in the appropriately titled “Mirror, Mirror“, which gives the dark version of Star Trek its name. Kirk, Bones, Uhura and Scotty beam up from tense negotiations with a delegation for a planet full of dilithium crystals to find themselves about an Enterprise that’s different. An ion storm caused the quartet to beam aboard and alternate Enterprise…while their evil counterparts came to the original ship. Kirk navigates a universe where Starfleet officers advance through treachery and violence, trying to recreate the accident that brought them over, while trying to keep the Mirror Universe Spock from destroying the aliens below. The original series had a few episodes where the crew played evil or strange versions of themselves, but the intrigue and parallels between characters are strong in this initial outing. 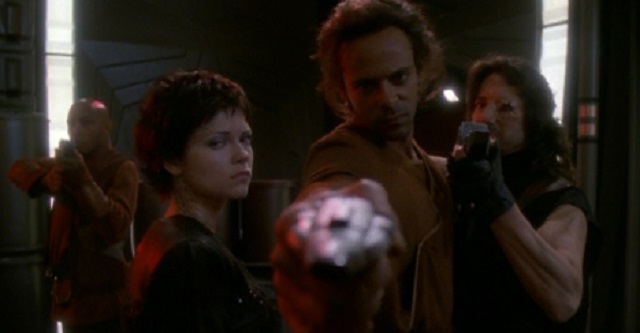 This series dirtied up the squeaky clean image of Starfleet with shifting alliances and moral questions with no clear answers. The show visited the Mirror Universe several times, starting with a trip through the wormhole in the second season episode “Crossover” where Bashir and Nerys discover that the mirror universe Kirk was influenced so much by the time he spent in the prime universe that he changed the Terran Empire just enough for it to fall to an alliance of Klingons and Cardassians. In the third season, Sisko is kidnapped by the Terran Rebels of the Mirror Universe to save the life of his counterpart’s wife in “Through The Looking Glass.” The fourth season brought “Shattered Mirror” to the airwaves, where Jake Sisko is used to lure Benjamin Sisko back to the Mirror Universe to help the rebels build a version of the Defiant and defeat a Klingon fleet led by Mirror Universe Worf. “Resurrection” in the fifth season centers around the relationship between Kira Nerys and the Mirror Universe’s Bareil Antos as a cover for the theft of the Orb from the prime universe to the Mirror Universe. The last trip, “The Emperor’s New Cloak”, offers a sixth season heist episode featuring Quark, the Ferengi, and a cloaking device that might just win the war for the rebels. 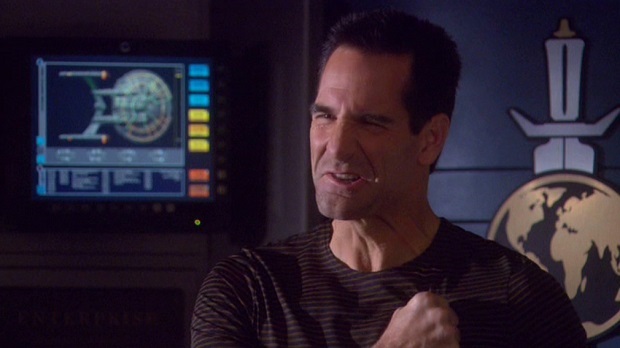 The opening of the Enterprise episodes that take place inside the Mirror Universe open with a literal bang that highlights where their universe may have diverged from the one fans know. Zephram Cochrane blasts the Vulcan that he makes first contact with a shotgun and tells his fellow earthlings to loot the alien ship. “In A Mirror, Darkly” is different from previous episodes in two ways: it’s a linked episode and the only one that doesn’t feature characters crossing over from the prime universe. What does crossover is the USS Defiant, last seen in the Tholian Web episode from the original series. The ISS Enterprise (the Mirror Universe counterpart of the USS Enterprise) is destroyed during the episode, but the battle over who controls the technologically advanced Defiant pushes the Mirror Universe crew in some unexpected directions.

Each of these episodes offers a chance to tell stories outside of the usual continuity with actors having fun playing different versions of familiar characters. Star Trek has a love of time travel, but these alternate universe episodes allow for not just the ability to revisit characters that have been killed off, but also show how the actions of the heroes can affect a universe full of darkness. Ultimately, the Mirror Universe is there to reflect just how good the main characters are and how they can make more than one reality a better place.