A Green Horde Awaits You in the Newest ‘Zombicide’ Standalone Expansion

Undead orcs are ravaging the western border of the kingdom, laying waste to everything in their path. Zombie walkers, runners, and fatties fill the streets and hunger for human flesh, their numbers growing with each passing minute.

Picking up where Black Plague left off, Zombicide: Green Horde is the latest Zombicide experience set in medieval times. Players take on the role of adventurers tasked with ridding the kingdom of the undead. They’ll search for weapons and spells to aid in their journey, but the deadly beasts unleashed by the orc necromancer are seemingly around every corner.

Will you and your fellow adventurers survive the undead and rid the land of their threats? Or will the kingdom succumb to the inevitable hordes of zombie orcs swarming the land?

In this cooperative adventure for 1-6 players, each game is dedicated to completing one quest. There are 10 quests included, but you can easily create your own by re-arranging the modular board tiles or even combining tiles with previously released Zombicide titles. (After all, who says zombie orcs couldn’t invade a mall or a prison?)

Each player begins with basic equipment and three actions per turn. You’ll spend these actions moving through the streets and buildings, searching for helpful items, or attacking zombies. Danger lurks around every corner, though, so players must work together to ensure everybody’s safety.

Searching is key to any Zombicide adventure since you’ll be able to equip yourself with stronger weapons and spells for the rest of the game. Of course, there may be a surprise or two within that item deck (spoiler alert: they’re zombies), but it’s usually worth the risk.

When the inevitable showdown with the zombie orcs happens, combat is a simple line-of-sight check and a quick roll of the dice, with players gaining modifiers depending on their weapons or spells. With every kill, characters earn experience points and can level up to gain extra actions, more powers, and special abilities.

After all of the players have completed their turns, the zombies activate, which means they’re on their impending march to feast on your character’s flesh. Only the strongest and most cunning warriors will survive and complete the quest.

Like previous editions of Zombicide, players will be able to better equip themselves with Green Horde’s all-new weapons, spells, and equipment. You’ll need all the help you can get, since orc fatties and abominations can deal a single death-blow to the standard adventurer.

The stronger monsters and new game tiles make hiding a more viable option in Green Horde. With hedges blocking line-of-sight and waterholes slowing down movement, you’ll be able to maneuver around the undead and even trap them as you duck and dodge your way to completing objectives. 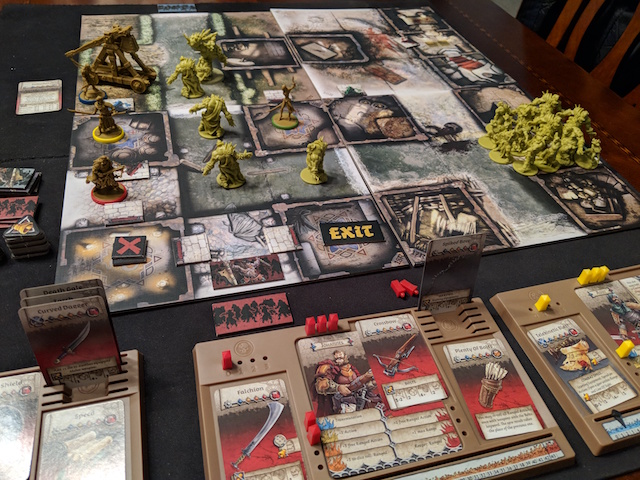 When your group begins to make its way around, the biggest and most tension-filled change in the game happens immediately: the horde. Whenever zombie spawn cards are drawn, most will require you to put additional zombies into the horde located off the board.

The horde grows with each spawn card and when the “Enter the Horde!” card is revealed, the horde is placed on the board. Seeing a dozen or more zombies in a zone is now a regular feature as you try to survive. 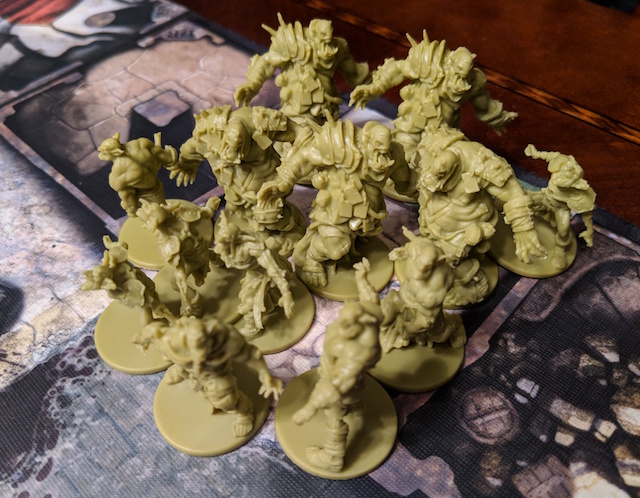 Thankfully, your group also has access to the mighty trebuchet. This catapult requires three actions to launch, but it can deal heavy damage to your more powerful foes or to the entire horde itself. It requires no line-of-sight and it can reach the horde as it assembles off the board. 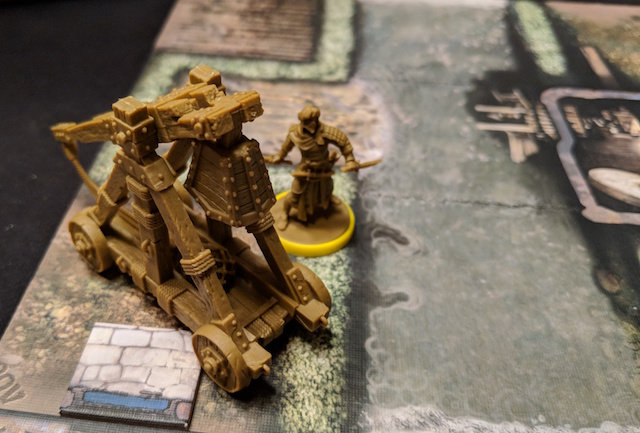 Like the previous entries in the Zombicide franchise, Green Horde is a claustrophobic slugfest through mobs of the undead. It doesn’t take long before your group is surrounded and the new horde mechanism increases your chances of being overwhelmed by zombies.

Thankfully, with new weapons, spells, and the way-too-cool trebuchet, you’ll have the tools to get out alive. None of the quests are easy, but taming the undead never is. Zombicide: Green Horde is an immersive dungeon-crawl experience that fans will appreciate.

Do you play zombie-themed games? Tell us in the comments! And be sure to check back here on GeekandSundry.com for Game the Game episodes every Thursday morning.