A Dual Perspective Overview of ‘Bob Ross: Art of Chill’

Blair Marnell: I’ve been a gamer my entire life, but I’ve only recently started playing tabletop games. My friend and colleague, Alexandra August, is an experienced tabletop gamer and a fellow writer for Geek & Sundry.  We’re all about we’re offering a more casual approach to tabletop in our review of the upcoming game, Bob Ross: Art of Chill, which is loosely based upon the late host of The Joy of Painting. During his lifetime, Ross reportedly painted up to 30,000 paintings and he still has many fans and admirers to this day.

Alexandra August: Moderately experienced is generous, Blair. Thank you! I am a very experienced Bob Ross lover, though, so count me as one of those fans and admirers. 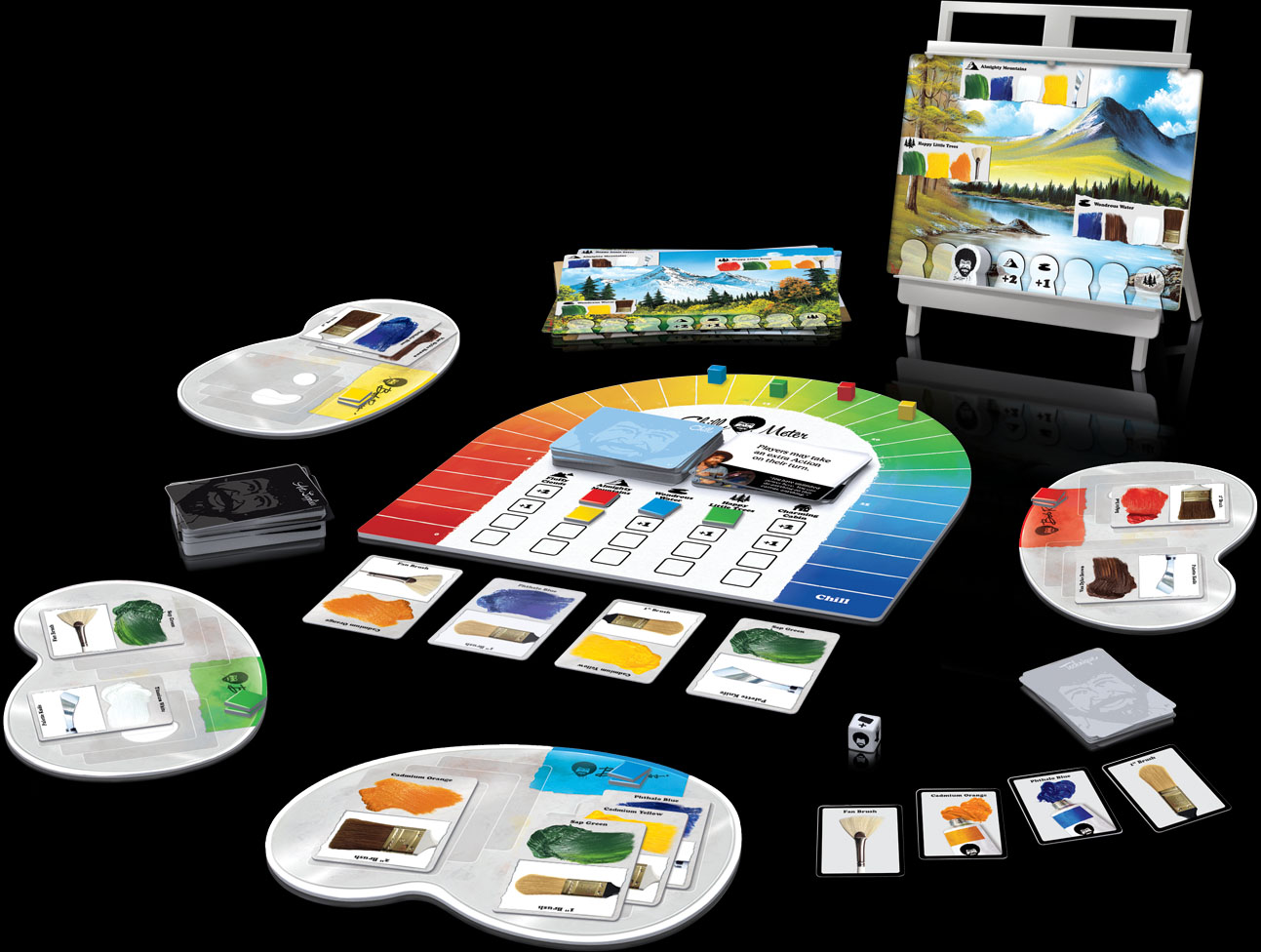 Blair: When I first heard about this game, I thought it was a joke. It doesn’t seem like a natural choice to build a tabletop game about Bob Ross and his “happy little trees.” It’s an intriguing concept, but I had trouble understanding the rules during the first playthrough. It may not be the best game for tabletop beginners to jump into. And it does take some time to really enjoy the game as an experience.

Alexandra: I had no idea what to expect from the actual gameplay, but given the subject matter, I knew the experience was going to be either nostalgic and adorable or unfunny and sentimental. Luckily, once we got comfortable playing, it was the former, and I found myself smiling at the various Ross-isms that show up at different points during the game. That said, I agree with Blair that the instructions are a little difficult to grasp at first, and it does take a practice run or two to understand how all the different elements work.

Blair: I learned more about the rules by watching you play than from the manual. Explaining the rules shouldn’t be so complicated. That was the only major downside for me.

Alexandra: Yeah, there was a definite lack of chill involved in learning the Art of Chill. 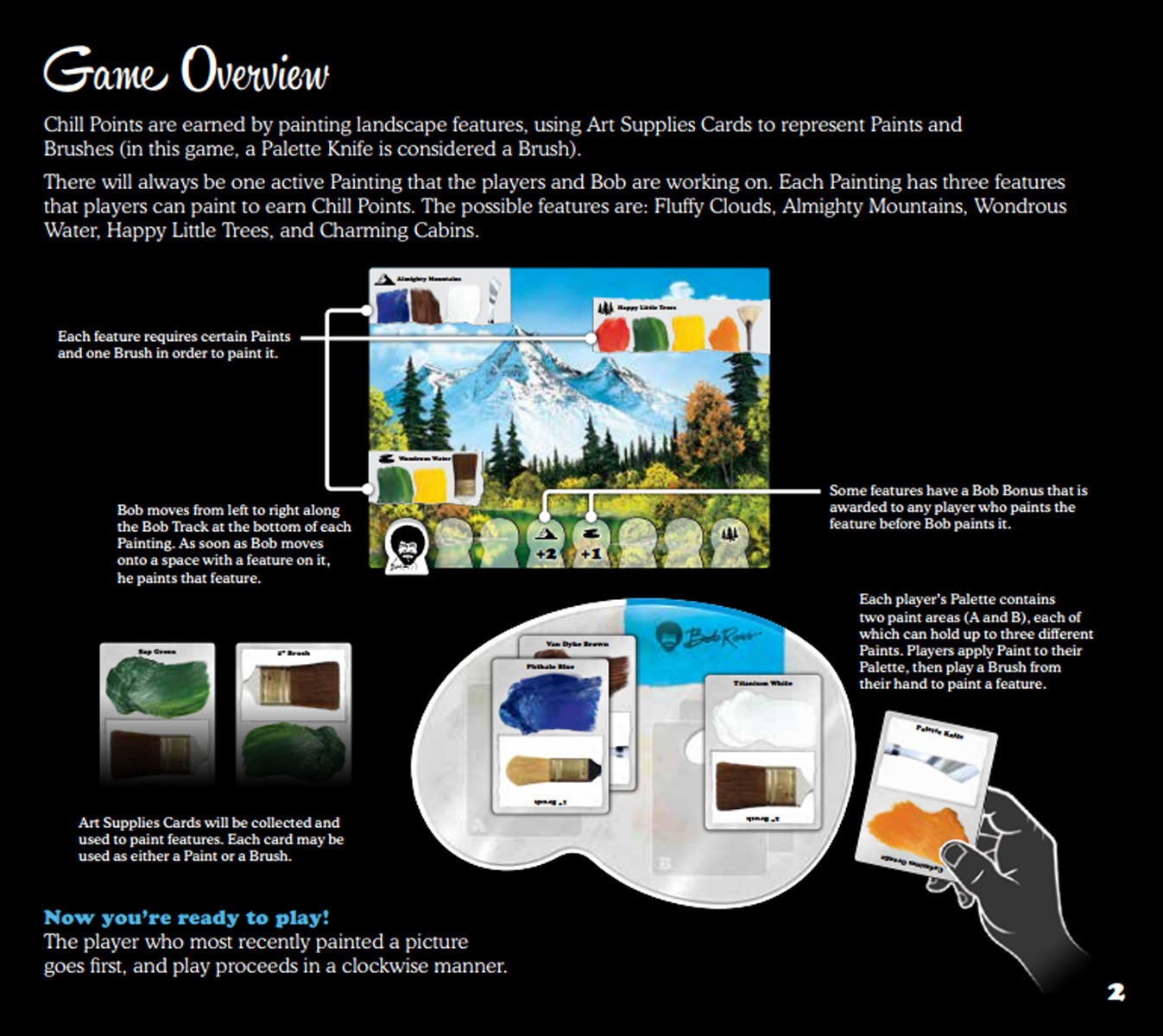 Alexandra: There’s a lot of different elements at work in this game, and that fact is reflected in its design. The basic object of the gameplay is to complete a Bob Ross painting by gathering the appropriate art supplies and arranging them properly on the palate each player picks at the outset. The more elements of a painting one completes, the farther along the board they move, until the winner reaches the “Chill Zone.” Each game cycle can complete several paintings, all of which are displayed on a mini-easel set up near the board, and the art supplies are arranged in a deck from which the players draw almost every turn.

Blair: I appreciate the way the game was built around the idea of recreating a Bob Ross painting. Part of the experience involves putting a miniature painting on a small easel and slowly advancing the Bob Ross icon until chill is achieved. It’s also a nice touch that the paint cards are held on palates, although I didn’t fully understand why we had to keep the colors from mixing since that didn’t seem to be a factor in the gameplay. Aside from some overly complex rules, the game has a pretty simple layout that is very easy to enjoy. If it’s not art, it’s art adjacent.

Alexandra: Art adjacent is a perfect way to describe it. 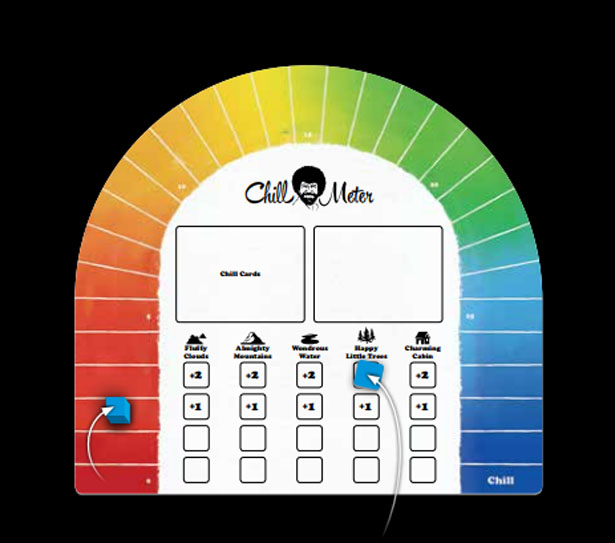 Blair: There’s probably only a small percentage of gamers with enough artistic talent to actually paint like Bob Ross. Fortunately, you don’t actually have to use real art supplies here. Instead, the paints and the brushes are the most common art supply cards, and the challenge came from getting the right lineup to vicariously “paint” the “almighty mountains,” the “happy little trees,” and other features commonly found in Ross’ paintings. The most entertaining part came when we rolled “Bob” with the dice and got the Chill cards. That reminded me of Monopoly’s Community Chest and Chance cards and that’s where the game showed off its sense of humor. Once we understood the rules, the game moved pretty quickly.

Alexandra: And it’s not that the rules are terribly complicated, there’s just a lot to remember going into each turn. For instance, each turn a player can take three actions. These can be taking a card from your hand and putting it on your palate, finishing a set of “happy little trees” or practicing a skill. Most die rolls result in picking a Chill card, and those often will gift the player with more actions on top of your original three — I think I wound up with as many as five or six at one point. On top of that, some Chill cards stay active until a new one is picked, so sometimes you have remember to take the action of an old card in addition to everything else you have to do on your turn. It’s not rocket science, but it definitely took a few rounds before we weren’t doubling back to take actions we forgot we had. Also, sometimes the instructions were a little vague about what constituted an action and what didn’t.

Blair: There were definitely times I felt lost and unsure about what I needed to do next. More clarity would have been really helpful.

Alexandra: Yes, I agree. All of the information in the manual perhaps could have been organized in a more streamlined manner. We found answers to all of our questions, but we really had to look a couple of times. 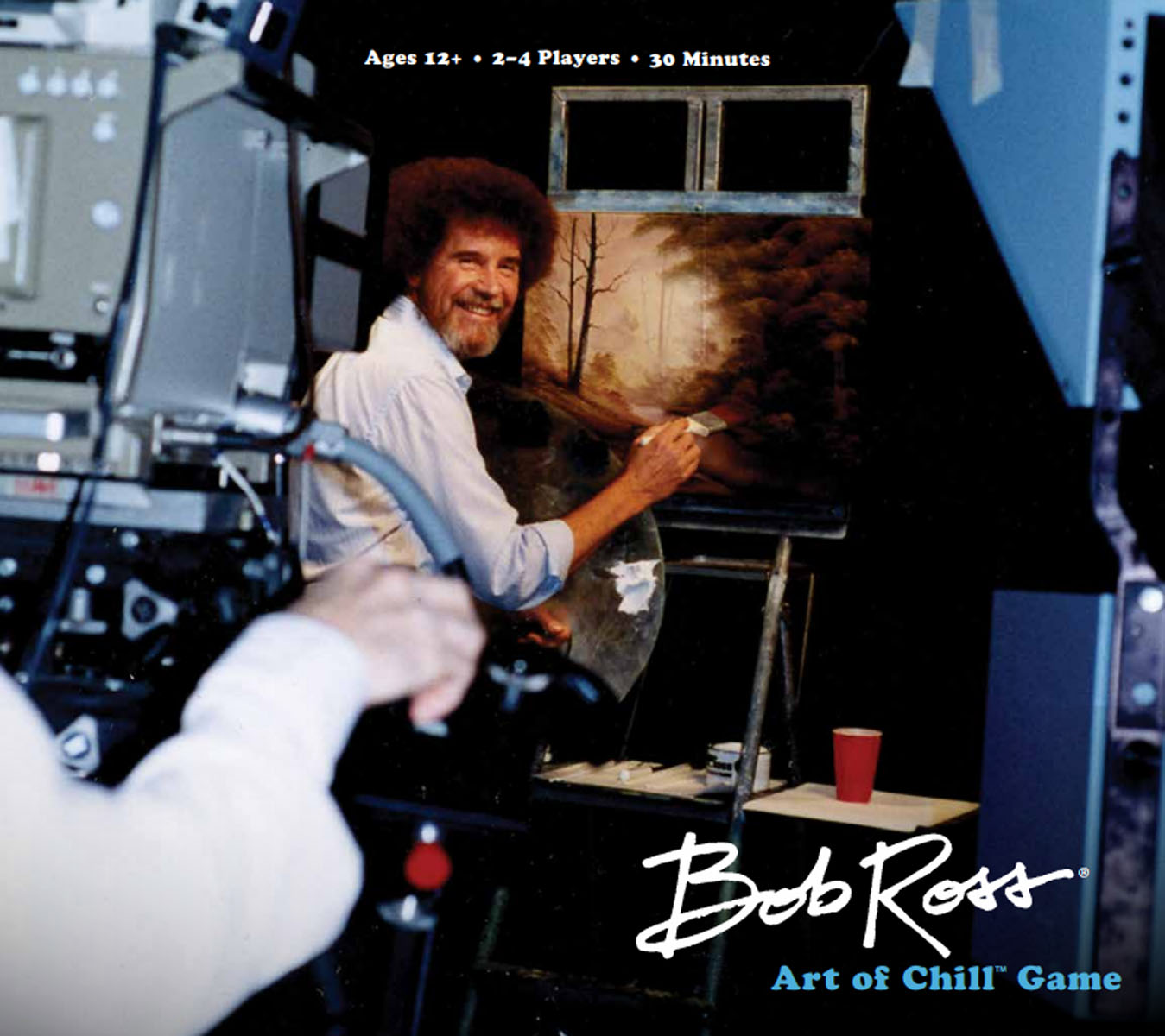 Alexandra: Once you can get past all the moving parts, the fun part of this game is how quickly it moves. Something satisfying happens almost every turns, and from there the tension builds as you race the other players to gather supplies and “paint” the most “wondrous waterfalls.” It’s basically the polar opposite of watching soccer, which is kind of ironic considering it’s called “The Art of Chill.”

Blair: Yeah, there was something special that happened once we got into the game. After our initial runs, the gameplay started moving faster and faster. Now I can understand why the suggested game time is 30 minutes. It can actually go a lot quicker than that, when you’re so focused on your next paint color or art tool that you lose track of time. That’s when the game felt really competitive, as we traded the lead a few times. It took us a while to get to that point, but it was worth getting there.

Alexandra: It really, really is fun once you get into it. But yes, it did take a minute to get there. It was worth it, though! I’d play this again, though probably not very often. It’s funny and cute, and there’s definitely some skill involved, but after a few playthroughs, the novelty wears off. It’s like a Bob Ross episode in that way — they’re lovely, but not exactly appointment viewing. That said, it’s fun, fast, and relatively low-maintenance. Bob Ross: Art of Chill would probably make for a great conversation starter at a casual tabletop night. Pair with wine and Bob Ross on Netflix and you and your friends will giggle and “aww” all night long.

Blair: I don’t think that Art of Chill will ever be my top choice to play if there are multiple board game options. Complicated rules aside, there is definitely some charm here. It was also kind of soothing to stare at the Bob Ross paintings while we were playing. The game didn’t take itself too seriously and it allowed us to keep things close with the occasional lead change. I really did enjoy playing it, but the thing that will bring me back to it is the knowledge that I could have won the last game if I had one more turn. That was a great moment, but I still want a rematch.

Alexandra: You just want one because I won the last round!

Bob Ross: Art of Chill will be exclusively available at Target this fall.