A Culture Clash on your Tabletop in Arena: For The Gods - Nerdist

A Culture Clash on your Tabletop in Arena: For The Gods

Do you have what it takes to stand in an arena, attacking your enemies as the crowds roar? Do you have the intestinal fortitude to bet away your own life as you posture for the most powerful spells and weapons that will aid you to your victory? Do you suspect that there’s a killer in that shy friend of yours, and you wish to unleash their inner warrior? Well friends, don Quetzalcoatl’s Feathers and brandish Ganesh’s Axe, because Arena: For the Gods! just might be the game for you.

In Arena: For the Gods! players will choose their hero and receive life points which they will use in two phases of the game. These life points, in the form of red cubes, are kept behind each player’s screen and are a secret!

Players will bid for their weapon, movement, shield and spell cards of choice using their life points. This can get tricky, because though you may really want that spell with the -3 attack, biding your life away for it won’t do you any good once you’re in the arena. 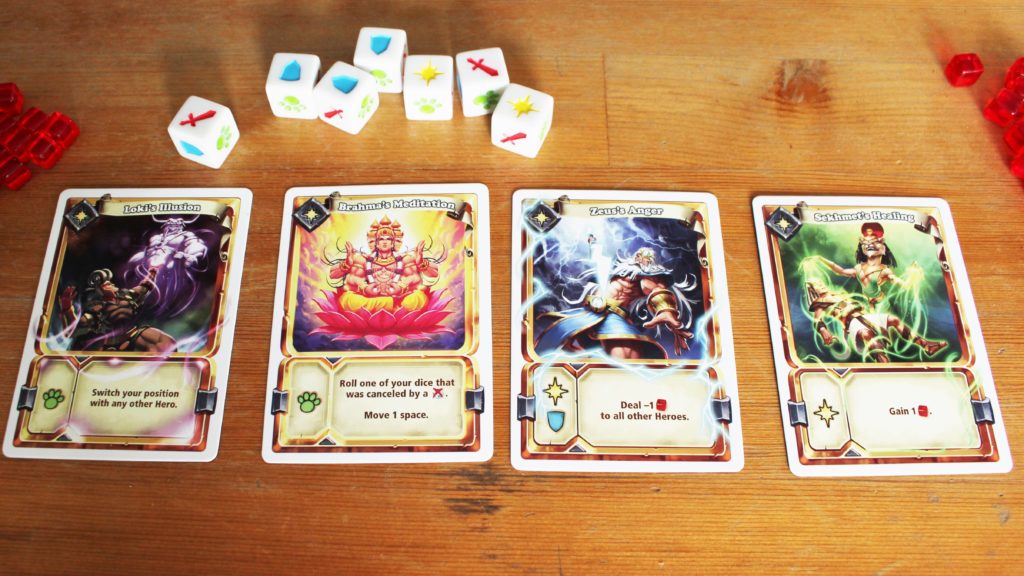 Once all players have their arsenal of godly favors, they can start to duke it out in the arena. Using the custom dice, players will activate their cards or actions in order to deal damage, exhaustion tokens, and blows to one another until finally a hero falls. Once a player has been defeated, the game ends and everyone reveals their life points. The player with the most points wins the game. 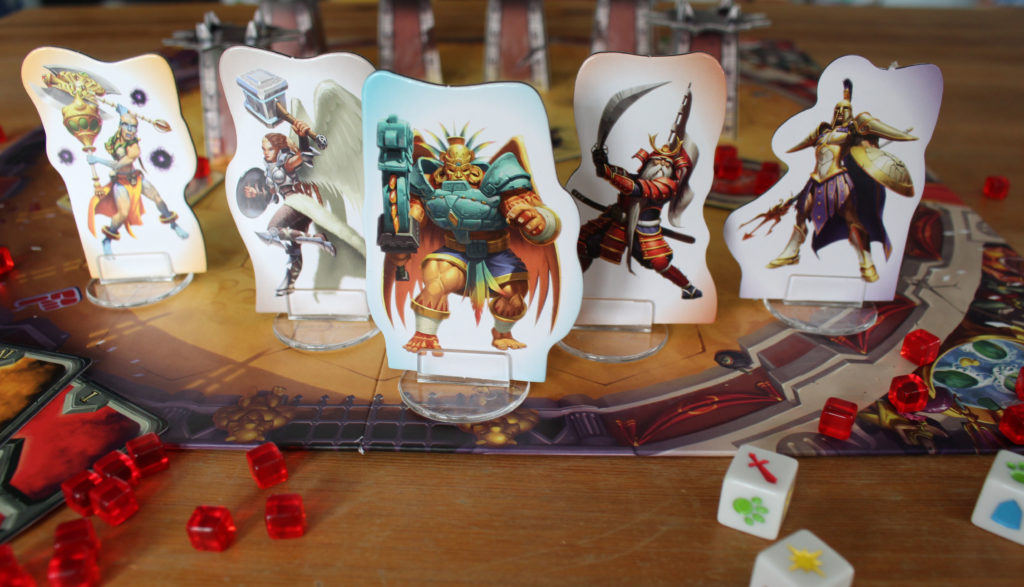 Possibly the most attractive aspect of Arena: For the Gods! is its versatility. Thanks to phase 1 of the game, you will likely never play using the same cards. Even if you choose Nakamura, he will be different every time you play. Not only do the heroes change, but the board can be set up in countless ways. Pillars, Traps, and Fountains of Life are used to shape the playing space and the players’ experience. The rule book offers several scenarios based on player count, difficulty level and the desired duration, but it also specifies that players can take the configuration into their own hands once they understand how the game works.

Is that still not enough shape shifting for you? Goodness.

The game also offers several different variants to choose from. There’s the expected team and two player variations but more exciting is the “Down with the Titan” variation. In this format, one player is beefed up with more equipment cards and assumes the role of a Titan who terrorizes the others. Players must join forces to defeat the Titan, or die trying. A second variation assures that players see more consistency in their heroes. In the “Instant Combat” variation, no one bids on their equipment cards but are rather assigned cards based on their chosen hero. This variation allows for the stars of the equipment cards to rise, as each hero boasts some pretty slick powers. It’s also a great way to learn the game mechanics as it skips the bidding phase and sets each player up to be evenly matched. 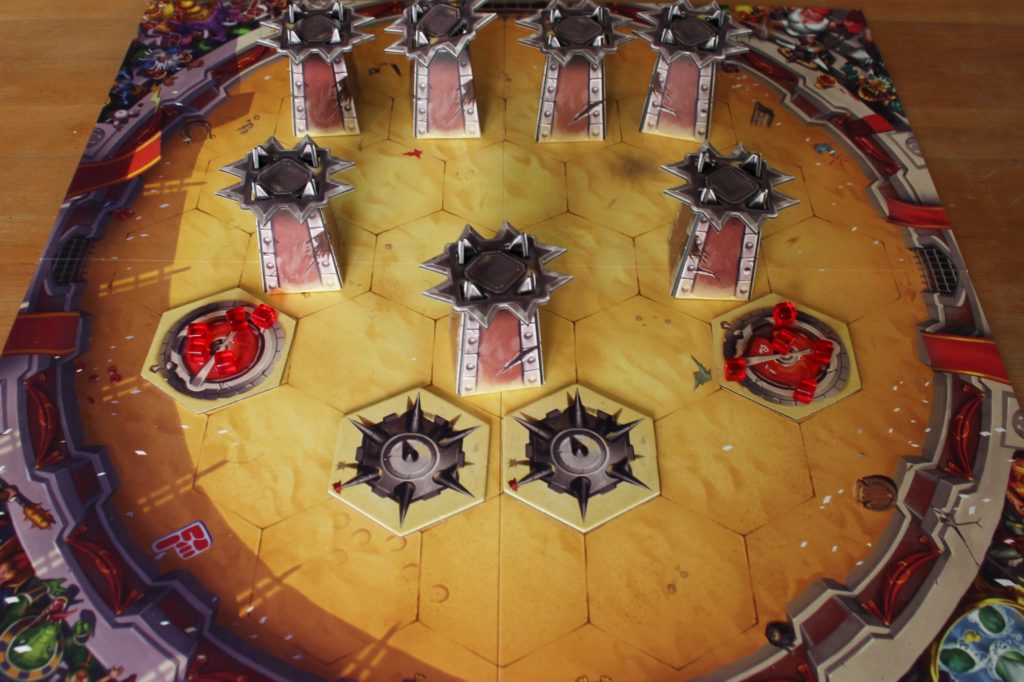 The game features some really fun artwork, and will definitely be a hit with that friend of yours who minored in World Religions. With each warrior belonging to a different ancient civilization, and the equipment cards boasting some powerful relics born from the history of rich cultures from around the world, sifting through the deck is nothing short of delightful. While the theme sings in these cards, it’s easy to see this game re-imagined in another setting. In fact, the game bears a striking resemblance to Iello’s big hit, King of Tokyo. In Arena: For the Gods! the simplicity of King of Tokyo is whisked away in favor or something with a little more strategy. The downside to this is that the excitement of the “take that” element is significantly reduced due to the lulls in momentum that happen when players fall victim to analysis paralysis. This works against the expectations of a game that is set in an arena where one anticipates battle cries and table flips, but it also offers more depth to players who want something a little meatier.

Even so, this game plays out rather quickly. The first warrior to fall signals the games end rather than waiting for the last player standing to win the game. This prevents the cat and mouse ending that would just drag on past anyone’s interest and more importantly, allows for another round of arena fighting regalement.

Overall, Arena: For the Gods! is a fun, medium weight game that works well for a group of folks who don’t mind being under constant attack. It may not be your best bet to bring out with new gamers since each player operates as a lone wolf, but it’s easy to learn and well worth the 30 minutes of playtime on your tabletop.

Have you played Arena: For the Gods ? Tell us what you think in the comments below! And don’t forget to tune into Game the Game on G&S Live every Friday from 4:00 pm – 6:30 pm where Ivan Van Norman and Becca Scott break out some of the best board games the industry has to offer, with new guests each week!