A Copy of LEGEND OF ZELDA Fetches $3,360 At Auction - Nerdist

A Copy of LEGEND OF ZELDA Fetches $3,360 At Auction

There’s money these days in vintage tech, and Heritage Auctions recently had its first auction of graded and certified vintage video games. The top lot was a sealed copy of the 1992 Classic Series release of Legend of Zelda for the original Nintendo Entertainment System, which fetched a whopping $3,360. (In case you were wondering, MSRP of the original game when it first released in 1986 was $49.99.) 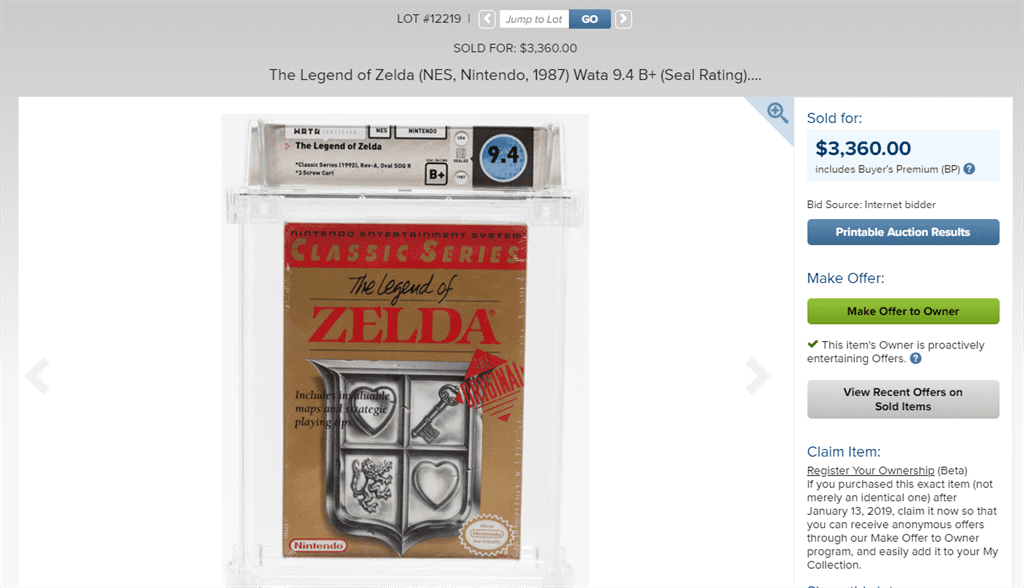 Other NES games that captured top dollar include a sealed copy of 1985’s Excitebike ($1,140) and a sealed copy of 1989’s Dragon Warrior ($660). Don’t go thinking that you can hit up your old collection or flea markets and find yourself a cartridge worth a few hundred dollars. The real value, as it turns out with many collectibles, is in the packaging.

In the era of NES, most games were bought not for collecting purposes, but to be played, making a sealed copy of beloved and iconic games extremely rare. High-quality grades on NES games are additionally rare – NES cartridges were packaged in cardboard boxes when sold, meaning maintaining pristine packaging is all the harder, and even complete games are rare because those cardboard boxes were thrown away, often with the game manual. (In contrast, Sega Genesis games were sold in plastic cases, and much like today those cases were kept with the manual contained.)

So while the downside might be that your collection of old games isn’t worth hundreds of dollars, the upside is you got to play them and love them growing up. And doesn’t that make your collection priceless?

What is the most prized game in your collection? Tell us in the comments!