A Complete Breakdown of How You Win at Catan - Nerdist

A Complete Breakdown of How You Win at Catan

We could say that breaking down the play of Catan into algorithms and probability charts takes all the fun out. Then again, we’re discussing a game that’s about managing supplies of wool and grain. Bean counting has always been at its heart.

“Player One” at Board Game Analysis has deduced that there are precisely 143 unique ways to win the game, all of them being different combinations of the five means to score points on the board. For those who need a refresher, those ways include building the biggest road, assembling the biggest army, and accumulating cities, settlements, and victory points. 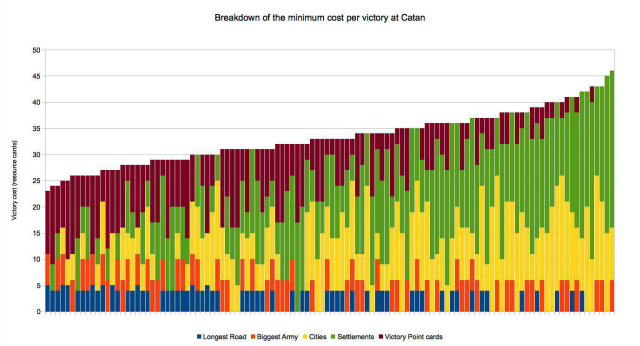 The particulars of how these measures are accrued relate to an algorithm called “the Knapsack Problem,” which uses the example of a bag to illustrate how people have incentives to maximize two different variables in a given situation. First, and obviously, they want to fill the bag to its fullest. However, what they want to fill it with can vary depending on their interests and the situation. Should the contents have the highest cash value? Or the lowest weight? Scrutinize the parameters long enough, and you’ll find there are a finite number of values, and a finite number of ways to balance them.

For Catan, those values are the five types of scoring, and there are only 114 winning combinations that can go into your “bag” when playing. The added wrinkle here is that player needs ten points to win at the game, but can win with eleven, depending on how a turn goes. If it’s unclear how these observations relate, practically, to gaming the system with Catan, then well… there’s a reason it takes a whole complete study to explain it. Player One even offers Java Code to support the interpretation this data. 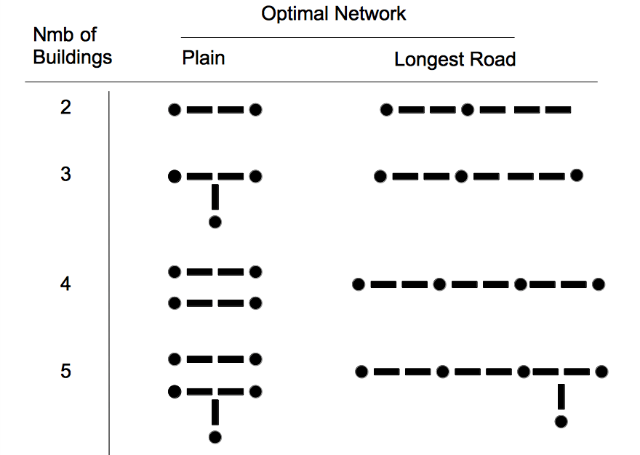 What’s the cheapest way to win, though? Surely, that’s all anybody cares to know. Well, it comes down to getting two settlements at the start, having the longest road (at five segments), having the biggest army special card (from playing three knight cards), and collecting four of the Victory point development cards. As it happens, you could get to that combo with just 23 resource cards. If that doesn’t sound especially easy, then perhaps you’ll need to keep some code handy at the next game night.

There’s a whole host of criteria beyond that to analyze, strategize for, and of course maximize. There’s actually a whole section, for instance, on road optimization; and it’s even been updated a bit since the initial publication. Yes, Player One really is treating this like a proper statistical study and has amended the initial article to address peer review. Indeed, the number of unique ways to win Catan was at first tallied at 104 before insights in the comments section prompted a revision of that tally to 114, and then the most-recent 143. A second part has been promised, but it seems like the first part continues to be a living document that will be continually updated to reflect what’s been turning into something of an open-source game study.

Will you be applying this strategy to your game? Knowing all this, does Catan seem more fun, or less fun, now? Share everything in the comments.