A Closer Look at Three Cool Monsters From Volo’s Guide

This past Friday, Volo’s Guide to Monsters finally became available in brick and mortar stores and on Roll20. If you got your hands on the book and you’re like me, you’ve already been reading and re-reading it to absorb every little bit of D&D goodness. While there’s plenty to say about this book, I’d like to give you a taste of three of the new monsters presented along with some adventure hook ideas for each one. Enjoy!

There’s a full spoiler of this one on the official D&D twitter FYI.

If you started playing the game with 5th edition, you may not recognize the Froghemoth, but it’s been kicking around and causing havoc since it debuted in 1976 as a special monster in the module “Expedition to the Barrier Peaks,” written by Gary Gygax himself. This adventure was pretty unique as it was set on a crashed space ship, something hinted at in the creature’s description under “Otherworldly Entities.” The module was designed to help transition D&D players over to Metamorphosis Alpha, TSR’s then-new sci-fi game that would later be “replaced” by Gamma World. Along with the Froghemoth, “Expedition to the Barrier Peaks” also featured laser guns, mech suits, and Vegepygmys (who also appear in Volo’s).

ADVENTURE HOOKS: If you’re experimenting with some of the new playable races in Volo’s Guide, try forming an all Lizardfolk party that goes on adventures driving out dangerous monsters from around its village.

Alternatively, you could write your own version of “Expedition to the Barrier Peaks.” Build your own crashed spaceship adventure featuring the Froghemoth and Vegepygmys in their new 5th edition forms. A crashed ship might be an interesting way to introduce some of the odder Volo’s monsters without it feeling like a soft reboot on your established game world. Just don’t let the party keep any of the laser guns at the end of the adventure. You could even design it so the lasers batteries have to be used to the power the crashed ship’s final door, or some other story function. 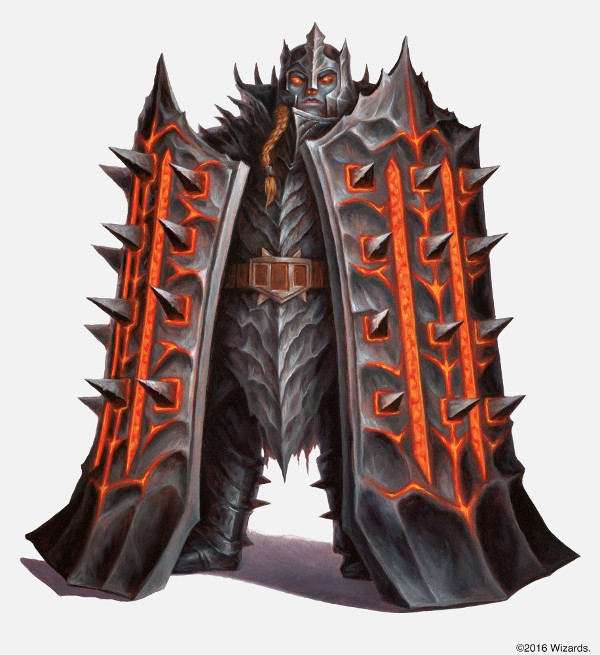 One of new giants presented in Volo’s Guide, the Fire Giant Dreadnought not only has an imposing appearance but is a really interesting monster in terms of how it fights. It’s going to offer a unique challenge to any party with a high enough level to safely encounter it.

First off, it has a has an armor class of 21, which isn’t something many parties are used to encountering. Characters with levels in the double digits usually forget what it feels like when to miss a target, so the Dreadnought will quickly bring back that tension during battle.

The Fire Giant Dreadnought also does 3 separate types of damage with every attack. With that amount of power and variety, it usually means one of the attacks is going to get through. Players will have to be on their toes and ready.

Finally, the Dreadnought’s “Shield Charge” ability could really create havoc in parties that are used to controlling the battlefield. Needless to say, this monster will get your party thinking and force everyone to change up their usual strategies.

ADVENTURE HOOKS: There are tons of published adventures featuring Fire Giants and this monster brings them new life. Even Storm King’s Thunder would be a good place to upgrade a fire giant or two if the party needs a real challenge. This monster can also be teased over a longer adventure by showing the party its unusual aftermath. Bulldozed buildings, forests burned to ash, and strange scorch patterns could lead the party on a trail of destruction, only to find a Dreadnought at its end… and possibly to theirs as well.

Leave it to D&D to introduce a book with 13 new playable races while simultaneously adding another race that I wish had playable rules. Grungs are basically gnome-sized brightly colored anthropomorphic Poison Arrow Frogs. This is a significant improvement over how they were depicted in early editions: 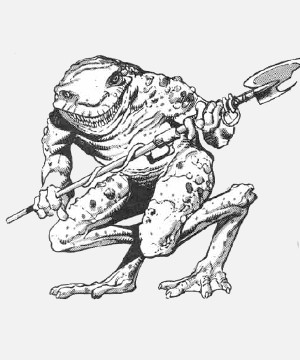 As soon as I saw this image, I immediately fantasized about roleplaying a horde of these little guys to torment my jungle traveling party. They present a pretty interesting combat challenge, too. They’re full of poison attacks, and also have built-in climb speeds that allow them to attack from trees, walls, or pretty much anywhere. A swarm of these little buggers requires a reasonably low challenge rating and I can’t wait to try them out.

Grungs also have a set of odd variant rules and side effects for their poisons. One such side effect is “the poisoned creature must shout loudly or otherwise make a loud noise at the start and end of its turn.” Adorable. I love these things. Please, please, please release playable rules, D&D!

ADVENTURE HOOKS: An easy way to incorporate Grungs into your campaign would be a “Lost City of Gold/El Dorado”-style quest to find magical items in mystical jungle ruins. The Grungs could be living within the ruins, perhaps having turned some of the old buildings into a spawning pool. Now they harass the adventurers at every turn, angry and defending their home from invaders.

Alternatively, because the Grung are slavers (seriously, why are so many D&D monsters unapologetic slavers? It’s become a tired crutch), they could kidnap an important person from a town outside of the jungle and the players are paid to go get him or her back. Hey, you could use the Froghemoth here, too!

These are just three examples of the cool new monsters in Volo’s Guide and they happen to be be some of the least dangerous. There are many more new monsters that deserve your attention, including some very cool alternate versions of Gnolls, Orcs, and Kobolds. In fact, I’m going back to reading Volo’s Guide again to get even more monsters and ideas for future campaigns!

Check out more thoughts on Volos here. What monsters did you like in Volo’s Guide? Did we miss any adventure hooks with the monsters listed here? Tell us everything in the comments.